MOSCOW – Alla Chernyshyova, an environmental activist, was detained Thursday with her two children, her colleagues told Bellona Web, saying she is the latest victim in a campaign to silence opponents of a new Moscow-St. Petersburg highway that is tearing up the ancient Khimki forest north of Moscow.

Published on February 14, 2011 by Charles Digges 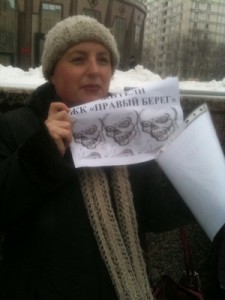 Following a wave of public protests over the summer, Russian President Dmitry Medvedev in August ordered the highway construction suspended so the route could be reassessed, but in December the Kremlin decided to allow the highway to go ahead along the original route.

Firms involved in the construction are reported to have high-level government connections, and highway construction is one of the most corrupt industries in Russia.

Recent remarks by Medvedev, however, made fuzzy his attitude toward the continuation of the highway project. In a Yekatrinburg meeting of the Presidential Council on Civil Society Development and Human Rights on February 1, Medvedev seemed to praise the public initiative that brought the Khimki issue to his attention.

Chernyshyova’s detention Thursday with her daughters, aged 3 and 6, came on the same day that authorities announced a March re-start date for the highway project, despite independent reports showing that the route through Khimki is the worst possible option available.

She was released later in the day, according to activists, police and Chernyshyova herself, who spoke with Bellona Web after her detention.

Chernyshyova, 35, was arrested on suspicion of taking a fake bomb to a Feb. 1 protest rally, according to police, who said a search of the area after the rally was dispersed turned up a plastic bag with a  “well prepared model of an explosive device.”

Chernyshyova’s supporters said she is innocent and called the detention the latest attempt to make sure the start of the construction isn’t threatened.

A supposed call to police from the site of the February 1 protest apparently tipped of law enforcement to a bomb threat.

“Unexpectedly, several police cars, machine guns, dogs and ambulances appeared at the site of the [February 1] protest meeting,” Yaroslav Nikitenko of the Environmental Defence Movement of the Moscow Area, which staged the protest, told Bellona Web. The protest was held in defence of the protected waterways of Moscow and specifically the Khimki river.

“The place where the meeting was taking place was blocked off by red tape and they asked us to leave on the suspicion that someone had placed a bomb there,” said Nikitienko.

Yevgeniy Chirikova, the leader of the movement defending the forest, confirmed police dispersed the February 1 rally, which both she and Chernyshyova attended, because of a bomb threat. Chirikova said there was an unattended plastic bag at the protest.

Police spokesman Yevgeny Gildeyev told The Associated Press Thursday that Chernyshyova had been taken into custody but hadn’t been officially arrested.

“It’s not an arrest, it’s just her delivery to the police station for clarification,” he said, prior to her release, adding that Chernyshyova wasn’t cooperating. “She’s playing the fool.”

Gildeyev said the children were in attendance at their mother’s insistence only.

A police spokesman said later Thursday that Chernyshyova was released from a precinct after questioning, but that Chirikova and Nikitenko may also be brought in to speak about the story.

What was in the bag – if there was a bag?

Chirikova so far has been clear about the incident with the allegedly abandoned bag in interviews with AP.

“It’s all a lie,” Chirikova was quoted by AP as saying. “We are seeing the start of a new trend against our movement […] Only Hitler would use such tactics.”

In a conversation with Bellona Web after her release later in on Thursday, Chernyshyova said that agents from the police’s anti organized crime unit had threated take away her children. She said that she had been warned by investigator Ivan Kalnitsky that she was only being questioned as a witness for now, but was the chief suspect in the bomb hoax.

Chernyshyova said that she had attended the February 1 protest with a plastic bag, but that it did not contain a model bomb.

“At the police station they asked in detail and over and over about the black bag I brought to the rally in an attempt to accuse me that the bag allegedly contained a model bomb,” she said.

She said that the bag contained various notes and petition forms against construction on the protected waterways.

“I have the bag at home. And the signatures that I carried in it are there. I did not leave the bag anywhere and brought it home with me,” Chernyshyova told Bellona Web.

According to Chernyshyova, during her conversations with the police about the allegedly abandoned bag, they did not produce it or the alleged model bomb as evidence.

Chernyshyova also confirms that she called the police from the site of the protest, a call that police allege reported the fake bomb. But Chernyshyov contradicted that.

“I called police station No 2, the Khimki precinct, and demanded that they bring the permission documents for the construction” slated to take place in the waterway area. Chenyshyova said that the police officers response was that, “We’re on the way.”

Activists say the flap that resulted in the alleged discovery of an abandoned bag containing a fake bomb was orchestrated to create legal hassles and arrests, but have so far not named who they think may have been behind the machination.

If Russia’s state security forces are behind it, a protracted investigation and summons to activists to speak as witnesses, who will later be accused of crimes, is not unlikely

If the firms involved in the construction of the highway are behind the apparent set-up, particularly the well-connected Teplotekhinka, which is responsible for clear cutting activities to build the new highway, then the atmosphere or corruption surrounding the Khimki developments, that would mean that Russia’s security services could act even quicker to quash protest and find those responsible for the allegedly abandoned fake bomb that no one but the police, apparently, have seen.

That those who stand behind or support the construction of the highway are capable of using thuggish tactics has been in evidence since the highway project began.

Journalists reporting on the Khimki forest have been brutally beaten, their skulls cracked and limbs broken. Environmentalist Konstantin Fetisov has remained hospitalized and unconscious since being severely beaten in November.

Kommersant reporter Oleg Kashin was stuck some 50 times with a pipe by two thugs in a stomach-turning attack, also in November, that was caught on a security camera. The footage was shown on state television to the outrage of the nation.

Mikhail Beketov, founder and editor of the Khimki newspaper, Khiminskaya Pravda, was among the first to raise the alarm about the destruction of the forest and suspicions that local officials were profiting from the project.

In November 2008, Beketov was beaten so viciously that he was left brain-damaged and unable to speak. His right leg was also amputated below the knee as were several of his fingers.

Beketov meanwhile was forced from his ongoing hospital recuperation last summer to answer charges in a defamation lawsuit brought against him by Khimki mayor Vladimir Strelchenko, hearings at which Strelchenko himself initially refused to appear.

After unknown parties attempted to blow up Beketov’s car and left his dog dead on his doorstep in 2007, Beketov accused Strelchenko of “political terror” in his relations to the media.

A Khimki court initially found Beketov guilty of the charge, and he was forced to pay a nominal fine, but the verdict was reversed on appeal.

The similarity of the attacks on Beketov and Kashin were so similar that Strelchenko himself was forced to make a public declaration that he had nothing to do with either of the beatings.

Medvedev had promised a through investigation of the beatings, and promised arrests even if the alleged perpetrators where of high government office, a statement heard by many as a tacit acknowledgement that official structures could be involved.

No arrests have been made in either case.