Russian police arrested 21 people Wednesday at a Moscow memorial rally for Sergei Markelov, a human rights lawyer who was shot alongside reporter Anistasiya Baburova in a brazen, broad-daylight killing near the Kremlin two years ago, the Associated Press reported.

Published on January 20, 2011 by Charles Digges 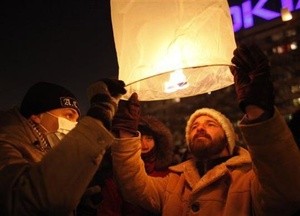 Hundreds of people attended the rally in memory of rights lawyer Markelov, 34, and Baburova, 25, who wrote for the strident opposition paper Novaya Gazata and whose slayings caused outrage in Russian liberal circles and in the West.

Their slaying on January 20, 2009 was a shocking reminder of the increased attacks and slayings of independent Russian reporters and human rights activists involved in the environment and the ongoing conflict in Chechnya.

The most renowned of these murders was that of Anna Politkovskaya, a Novaya Gazeta reported whose strident anti government position on the Chechen issue earned her many enemies in the Kremlin. Gunned down in a shooting caught on closed circuit video in her doorway in 2006.

Attacks on journalists covering the Khimki Forest issue, most notably attacks on Khiminskaya Pravda editor Mikhail Beketov and Kommersant’s Oleg Kashin, have drawn hundreds onto the streets in Moscow for rallies in the name of press freedoms.A statement issued by Reporters Without Borders, a major international press freedom group, in Novemeber situated journalists’ safety in Russia below that of Iraq and only slightly ahead of Afghanistan.

During the after-dark vigil for Markelov and Baburova on a central square in Moscow, people at the rally released Chinese lanterns into the air, holding candles and clutching portraits of the assassinated  lawyer and reporter.
Police spokesman Anatoly Lastovetsky told AP on Wednesday that people wearing masks at the rally were detained as well as those who lit flares. He said they would only be held briefly.

Markelov, an authoritative lawyer whose work had angered nationalists, and Baburova, a journalist walking with him from a news conference, were shot in a central Moscow street by a masked gunman.

At the time of his killing, Markelov had just come from a press conference where he protested the early release of former Russian Army Colonel Yury Budanov, a tank commander, whose strangling of an 18-year-old Chechen woman in 2000 put names and faces on the gruesome rights abuses in the war-wracked region, and was one of the first acts of violence perpetrated against civilian Chechens by the Russian army that ended in a prosecution.

Yet Budanov’s actions made him a hero to many in Russia’s nationalist community.

The trial of a man and a suspected female accomplice opens in Moscow next week.

Prosecutors accuse Nikita Tikhonov, 30, and his girlfriend Yevgeniya Khasis, 26, of killing Markelov because of his work as lawyer for hate crime victims. Tikhonov gunned down Baburova as the murder witness, the prosecutors allege. Both Tikhonov and Khasis, known nationalists, deny the accusations, according to press reports.

Investigators say they found the murder weapon in Tikhonov’s apartment a few days before his arrest in November 2009.

Neither of the suspects have an alibi because they could not recall their actions on that day, Tikhonov’s lawyer, Alexander Vasilyev, said Tuesday, according to AP.

Yet few of these contract style killings and beatings are solved. The case against the alleged killers of Politkovskaya brought about a rare jury trial in 2009 that collapsed because prosecutors failed to make more than a perfunctory case against the accused, which led to an acquittal.

Russian President Dmitry Medvedev, who has been at pains to mend fences with opposition journalists and activists, especially in the run-up to his possible re-election, slammed the verdict in the Politkovskaya murder trial and demanded that prosecutors hit the books and produce a winning case.

Many of the cases are hard to crack because of the shadow of Russian government complicity that hangs over them.

official hands behind the attacks?

The beatings of Kashin and Beketov remain unsolved. Beketov, who wrote strident investigative pieces against the planned $8 billion highway project between Moscow and St. Petersburg through Khimki Forest to Moscow’s north was beaten unconscious and left for dead in front of his apartment building in November 2008.

Rights groups and journalists appealed to President Dmitry Medvedev to take high profile control of the investigation. The Kremlin support, however, never came.

Still in hospital care, Beketov was left with brain damage that affects his speech centres, and several of his fingers and his right leg had to be amputated.

But the attack against Beketov was not the first indication that he was in danger. In May 2007 his car was set ablaze and his dog killed and left on his doorstep in apparent response to his paper’s anti-Khimki highway reporting.

In a television interview that summer, Beketov accused Vladimir Strelchenko, the mayor of the Moscow satellite city of Khimki of “political terror” against journalists. This elicited a defamation charge from Strelchenko, and Beketov was forced to attend numerous hearings from his hospital bed, only see them cancelled because Strelchenko refused to show up.

In November, Beketov was found guilty of defamation and forced to pay a nominal fine. An appellate court, however, reversed the verdict in December.

Beketov’s attackers remain at large, and the police closed the investigation until Kommersant’s Kashin was brutally beaten in an attack that was caught on a surveillance camera on November 6.

The attack, which was aired on state television to national outrage, showed one assailant holding Kashin down while another beat him with a metal bar. The similarities of Kashin’s attack to Beketov’s were so striking that Moscow papers speculated that Strelchnko was behind Kashin’s attack. Under pressure of these reports, Strelchnko was forced to make a public denial that he had anything to do with the attacks.

After Kashin’s attack, Medvedev declared that the case would be investigated fully and the culprits, no matter how high up on the official chain, brought to justice. No arrests have been made.

Medvedev to ‘tear the heads’ off Kashin’s assailants – will he?

Yet Kashin, who has recovered from his injuries, Tuesday reported on his Twitter account that during a visit to Palestine that coincided with a state visit my Medvedev to Jericho that he had had a conversation with Medvedev.

“The president promised to tear off the heads of those who attacked me,” Kashin said on his twitter account, according to the Itar-Tass news agency.

When reached by Bellona Web, Kremlin spokesmen could not confirm Medvedev’ words.

Long roster of beatings around Khimki

Six journalists and activists have been severely beaten in Khimki alone since 2007. In the most recent attack, a page designer with Civil Consent, the only newspaper still critical of Strelchenko, died in late March 2009 after being beaten near his home.

In February 2009, 72-year-old Yury Grachev, editor of opposition Solnechnogorsky Forum newspaper was found by neighbours, unconscious and bleeding, in the entryway of his apartment building.

Initial comments to Kommersant newspaper by the police suggested the attack on Grachev was related to a “sex case.” His paper was known for exposing official corruption, and during the attack, Grachev said only his briefcase containing materials about a journalistic investigation went missing.

In April 2009, 67-year –old founding member of Memorial, a group that catalogues the crimes of the Soviet Era and head of the group For Human Rights, Lev Ponomaryov, was beaten outside his Moscow apartment building.

In this case Ponomaryov said the police has responded satisfactorily to his complaint. But independent calls to the police indicated they were treating the incident as a routine mugging.

Bulldozers to roll in Khimki

In a response to public outcry an violence against activists and reports, Medvedev in August called a halt to the clear cutting in Khimki, urging that the government review alternative routes.

One of the largest public comments came from Russian rock star Yury Shevchuk and U2’s Bono, who played a joint concert at Moscow’s Luzhniki stadium.

But on Dec 15, Medvedev’s personal spokeswoman Natalya Timakova told reporters that the highway project through Khimki Forest would continue as originally planned, something political analysts have suggest could reopen wounds between Medvedev and the civil society demographic he is trying to court.