The Bellona Foundation pleased with the outcome in Cancun

CANCUN, Mexico – Bellona is very pleased that the climate change summit in Cancun ended in consensus and progress in a number of areas. “The outcome will not save the climate, but it lays a good foundation for future ambitious climate action,” said Bellona’s international adviser, Svend Søyland. 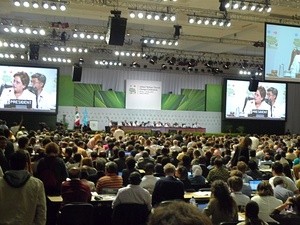 The time is the day after in Cancun, Mexico, and the plenary negotiations hall echoes of applause.

“It’s very encouraging that all countries stepped up to the occasion, and demonstrated the will to compromise on so many issues,” Søyland, said.

Consensus issues in Cancun include technology transfer, conservation of forests and the establishment of a climate fund for measures in developing countries.

Bolivia eventually stood alone as the one country reluctant to accept a compromise, but had to realise that the rest of the world supported the agreed upon text.

“The Kyoto Protocol was in dire trouble here, but now parties have agreed to continue the negotiations in order to avoid being left without any kind of climate agreement at the end of 2012, when the Kyoto Protocol’s first compliance period expires,”said Søyland.

“We still have a long way to go before world leaders commit to cutting CO2 emissions to the degree we so badly need,” said Søyland.

Bellona is particularly pleased that the summit opened up to include CO2 capture and storage in the Clean Development Mechanism (CDM).

“If this proposal materializes in Durban next year, it will be a good incentive for industry and governments to invest in this important climate mitigation technology in countries like China, India and Brazil,” said Søyland.

“Even though this is not a done deal, the progress is a victory for all of us who have worked tirelessly to promote CO2 capture and storage in the fight against climate change,” he added.

In Cancun, nations acknowledged that the issue of forest conservation is not an easy one. Bellona believes it a positive development that sustainable forest management was taken into account.

“In Cancun, the countries have acknowledged that the conservation of forests is a complex matter. Bellona believes that it’s positive that the declaration emerging from Cancun ensures sustainable management of forests. In a historical perspective, emissions related to forests is the area that has seen fastest development in the climate negotiations. Ten years ago, no one thought forests were going to be a part of a climate deal,” said deputy chairman of Bellona Europa, Tone Knudsen.

“The fast progress is mainly due to technological development of measuring methods and political will to prioritise this area. Norway has played a key role in this,” Knudsen added.

Bellona is the only environmental organization that has organized workshops at the negotiation centre in Cancun, and the organization was positioned close to the delegations from Norway, the United States and Britain.

“We have done this in order to inform negotiators and other stakeholders about available climate technologies,” said Knudsen.”

“Several of those visiting our workshops were not aware of the opportunities offered by carbon negative solutions, meaning solutions that absorb more CO2 from the atmosphere than they emit, resulting in net reductions,” she said.