Russia must take responsibility at the climate summit

CANCUN, Mexico – Russia has no specific climate policy, an unclear position at the climate change summit in Mexico, and as one of the world’s biggest polluters, it must get into the game with specific efforts for the climate fight, said Bellona’s Elena Kobets.

On Friday, Bellona organized a workshop at the Cancun climate summit entitled “Russia’s role and position in the climate negotiations.” Kobets of Bellona’s the Environmental Rights Centre (ERC) Bellona, Bellona’s St. Petersburg office was one of the speakers, and she said that Russia is unpredictable in the negotiations.

She was joined by Vladimir Slivyak of Russia’s Ecodefence, and Alexei Kokorin, head of climate and energy programs at the World Wildlife Fund, Russia.

“Even the official delegation has trouble saying what Russia really wants in this climate summit,” said Kobets.

Last year, Russia signed the Copenhagen Accord that emerged from the UN Climate Summit in Denmark, but the accord is vague and not legally binding. Now the Russian environmental organizations hope that Russia will bring some clarity to the question of how much the country wants to reduce its emissions.

It has previously been said that Russia will cut between 15 and 25 percent of emissions from 1990 levels by 2020, but a major sticking point  is whether CO2  absorption by Russia’s expansive forests should be included in this stated goal.

At the Bellona’s  workshop,  the WWF’s Kokorin asked that Russia clarify its promises. He believes that Russia should establish that the country will reduce emissions by at least 25 percent compared to 1990 levels by 2020, and that Russia should not be allowed to count CO2 uptake by the forests.

“Russia should go out and make it clear that inclusion in the forest does not count, “said Kokorin. 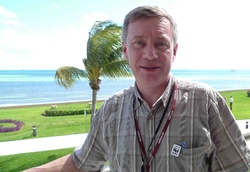 Kobets from Bellona believes Russia has the capacity to promise CO2 emissions cuts of 35 percent – not just 25:

Do not sell “hot air”

Russia is today sitting on many emission allowances that it does not need, which emerged after many polluting industries in Russia shut down. The administration is seeking to sell these quotas, but this hasn’t happened.

“It would seriously undermine the global effort against global warming if Russia sold those quotas. Russia must not do so, we must not sell “hot air”, said  Ecodefense’s Slivyak.

It is now relatively certain that Russia will withdraw from the Kyoto Protocol. Prime Minister Vladimir Putin is expected to stand behind that decision and there is little real hope that Russia will reconsider this position.

The WWF’s Kokorin hopes that Russia will not in the meantime be on board with destroying the Kyoto Protocol altogether:

“Be careful with the Kyoto Protocol,” said Kokorin.  “It covers only 27 percent of global emissions, but we cannot see any new deal just around the corner. So Kyoto is, in fact, the only legal agreement we have. If Russia must now withdraw, at least other countries have the opportunity to continue the Kyoto agreement.”

The United States, India are Russia follow China as the world’s major CO2 emitters. Last year, Russia’s political leadership came forth and acknowledged the threat of climate change and the tremendous impact that global warming would have on Russia.

Prior to arriving in Copenhagen last year, Russian President Dmitry Medvedev announced he would sign the country’s long mothballed climate doctrine. This however, has been followed by little action.

“The Climate doctrine was actually pretty good, but now there must be something specific. The only thing we have is a law on energy efficiency, but it says only that we have to replace light bulbs, and that is not enough, said Bellona’s Kobets.