CANCUN, Mexico – While the world struggles to agree on a deal that cuts CO2 emissions in large measures, it is even more important to work with good technological solutions. In Cancun, Bellona has focused on a carbon negative solution: bio-CCS. 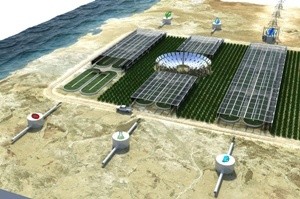 Among the negotiators at the climate summit, many are not aware of the opportunity to combine sustainable biomass production with CO2 capture and storage, so-called bio-CCS.

Friday Bellona and the Global CCS Institute arranged a workshop  to inform negotiators and stakeholders about the potential of such a solution.

Tone Knudsen, adviser at Bellona Europa, Bellona’s Brussels office,  began the seminar by showing that the need for large reductions in CO2 emissions is pressing. Bellona has long shown that one needs many solutions to reach satisfactory emissions reductions, and that energy efficiency and renewable energy are among these. These alone, however, are not enough in themselves.

CO2 capture and storage – the capturing of CO2 emissions from major emissions sources and storing them a safe depth below ground is also a necessary step.

So far, CO2 capture and storage has primarily been linked to fossil sources, such as coal power plants. Whether one likes it or not, coal, oil and gas will in use for many years to come, and Bellona has never been in doubt that CO2 capture and storage is an important solution to mitigate the effects of this reality on the climate.

In recent years, Bellona has worked to promote the combination of CO2 capture and storage with the sustainable production of biomass, like algae. As algae grows, it takes up CO2. In other words, it removes existing CO2 in the atmosphere. When algae is burned in a power plant to produce energy, it releases CO2, but if the CO2 is captured and stores, emissions become negative – thus producing carbon negative energy.

Bellona underscored at Friday’s workshop that it is important to choose the right type of biomass production that doesn´t conflict with forest preservation or food production.

Joris Koornef from the Dutch research institute Ecofys was at the workshop presenting a study on the potential for bio-CCS. The report, which is nearly complete will conclude that the technology provides enormous opportunities, but points to economic challenges. A central prerequisite for putting bio-CCS into wide use is that CO2 emissions carry a high price.

“Theoretically, it may eventually be possible to remove 10 Gt of CO2 each year with bio-CCS,” Koornef told Bellona Web.

That would correspond to a third of the emissions from fossil fuels: The use of coal, oil and gas put emissions at around 30 Gt per year.

Politicians must be informed

Bellona has been working with bio-CCS for several years, but this solution is not yet particularly well known.

Tim Dixon, who works for the Global CCS Institute and the International Energy Agency’s Greenhouse Gas Programme (the IEA GHG Programme), told the workshop that climate policy has been developed without the knowledge that carbon negative solutions exist.

“Policy, laws, regulations and incentives have been established without regard to bio-CCS,” said Dixon. “Therefore, policymakers  need to be aware and informed.”

CO2 capture and storage  was included for the first time in a recently revised directive for the EU emissions trading system (ETS). The quota system will provide rewards for reducing emissions, but there are no provisions for negative emissions. What tools should be used to promote bio-CCS in the future is therefore an important discussion.

A yes from the IPCC

The Intergovernmental Panel on Climate Change (IPCC) earlier this week held a meeting, or a side event, where the next major report from the panel was discussed.

Bellona’s Knudsen asked IPCC chairman Rajendra Pachauri whether carbon negative solutions, such as bio-CCS, would be a part of the climate measures in the new report. Both Pachauri and Dr. Ramon Picha-Madruga co-chair the group, which will look at mitigation solutions, confirmed that all possible solutions must be included.