A hotly contested motorway will go through the ancient Khimki Forest north of Moscow to St. Petersburg as initially planned, despite environmental outrage over the project and brutal attack on reporters covering the issue, Deputy Prime Minister Sergei Ivanov told reporters in St. Petersburg Tuesday.

Published on December 14, 2010 by Charles Digges 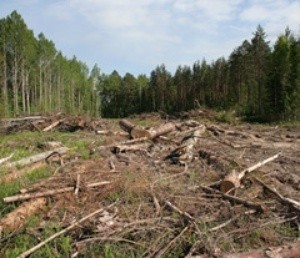 The dispute over the Khimki Forest is not just about losing precious trees – part of the forest has already been chopped down. But the issue has become a flashpoint between the government and the public, exposing abuses of power and a juggernaut of violence against journalists and activists who have written or demonstrated in opposition to the $8 billion highway project.

Cabinet ministers said the Khimki stretch would be ready by 2014.

President Dmitry Medvedev put the project on hold for further consideration of alternative routes for the highway this summer after protests and rock concerts brought international attention.

Russian television reports today indicated that the final decision to move forward with the project lies with Medvedev, who has so far had no official comment.

“There were really good alternative options […] but the authorities have once again confirmed that the corrupt way of solving problems is the only one for them,” he added.

Yaroslav Nikitenko, an activist with the Movement in Defence of the Khimki forest, told Russian news agencies there had been no social debate as called for by Medvedev, and that the decision would be contested.

The European Commission withdrew its pledges of financial support for the highway project in early November, saying that, “the project does not correspond to environmental and civil principles and the standards of the European Bank of Reconstruction and Development.”

EC international economic affairs director Marco Buti further stated that money for the project would only come if civil society organizations representing Russian public opinion were on-board with the project’s continuation. Responsible parties at the EC could not be reached for comment directly, but if their position remains unchanged, funding is unlikely.

Harassment, beatings of reporters and activists

But special brutality has been visited on reporters and activists who have voiced opposition to the highway project, and Ivanov’s announcement crystallizes a history of disregard for public opinion surrounding the hot button issue.

Khimki area newspaper editor Mikhail Beketov has become a symbol for rallies that have taken place in defence of the forest and press freedoms after he was brutally beaten and left for dead outside his apartment as far back as 2008.

The attack left him with brain damage to his speech centres, an amputated leg and several amputated fingers.

A more recent attack on November 6 on Oleg Kashin, a reporter for the daily Kommersant who was covering the Khimki Forest issue, aslo galvanized public opinion against the road project. Kashin’s attack, which bore striking similarities to Beketov’s was caught on a video surveilance camera. The grizzly footage was broadcast on state television to national outrage.

Upon regaining consciousness from a medically induced coma, Kashin connected his assault directly to his coverage of the Khimki issue whle speaking with investigators.

Also in novemeber, environmental activist Konstantin Fetisov was beaten in connection with his advocacy for the forest, his supporters say.

Meanwhile, Teplotekhinik, the company contracted to carry out the clear cutting lodged a civil suit against the leader of the Movement in Defence of the Khimki Forest, Yevgeniya Chirikova, as well as two journalists, one from Radio Liberty and the other from Novaya Gazata, the last of Russia’s fiercely independent national papers.

Public opinion, according to Nikitenko of the Movement in Defence of Khimki Forest, is also starkly divided. According to his figures, 65 percent of Russians are against laying the road through Khimki Forest.

“We expect the president to decide who he is siding with: officials or the public,” Nikitenko said.

The Russian officialdom’s stance on Khimki and the civil rights issues surrounding it has been decidedly bifurcated. One the one hand, Medvedev was willing to yield to demand of large rallies over the summer demanding that the government reconsider the highway’s route. And, as a result of the violent backlash against reporters, the Duma is considering a bill that would stiffen penalties for attacks on journalists.

At the same time, Beketov was over several months hauled from his hospital bed to face a defamation trial brought against him by Khimki Mayor Vladimir Strelchenko. Beketov had in a 2007 television interview accused Strelchenko of “political terror” in his dealings with the media after someone had set Beketov’s car ablaze and some left his dog dead on his doorstep.

Initially found guilty of the charge, the verdict against Beketov was reversed on appeal last week.

Medvedev had also promised a vigorous investigation of Kashin’s beating to be headed up by his offices, and that the culprits would be found regardless of their official standing – a tacit acknowledgement that the attack may have originated in government corridors. And prosecutors also reopened the closed case on Beketov’s attack. Yet neither investigation has yielded any suspect.

When questioned on the progress of the Kashin investigation in late November, however, Medvedev seemed to back away from his earlier bold comments, saying “Now [the investigation] is not a matter for the president of Russia but a matter for law enforcement. Let them work.”

Many advocates for press and environmental freedoms had suggested that Strelchenko may have been behind the attacks against Kashin and Beketov, a charge Strelchenko eventually publicly denied “We expect the president to decide who he is siding with: officials or the public,” the Movement to Defend Khimki Forest’s Nikitenko said, adding that 65 percent of Russians opposed laying the road through the Khimki forest.

Speaking in St Petersburg today, Deputy Prime Minister Ivanov said a government commission had decided the project should be resumed.

The decision was taken, he said, based on “all factors – including the transport one, the economic, social and legal ones, as well as the time limits for the implementation of the project.”

“On the whole, the need to build this road is, in my opinion, supported by everybody,” he added.

In a bid to placate green activists, officials say the chosen 8-kilometre route through the forest is the least damaging of several possible routes linking Russia’s top two cities. Transport Minister Igor Levitin said only two houses need to be demolished under the proposed route and any alternative would require dozens to be destroyed, the Associated Press reported.

Authorities also promised to make sure no gas stations, stores or other roadside infrastructures are built along the highway section that runs through the forest, and said noise barriers would be erected to protect surrounding wildlife, said AP. Officials had previously slated the land around the road for development.

Russian news agencies also cited Ivanov as saying 500 hectares of trees will be planted elsewhere to compensate for the 100 hectares of uprooted woodland at Khimki.