ST. PETERSBURG – Construction of the Moscow-St. Petersburg highway is too far advanced to be stopped and will run through the Khimki forest as originally planned, President Dmitry Medvedev said through his spokeswoman on Tuesday to the uproar of environmental groups who had opposed the project.

Published on December 15, 2010 by Charles Digges 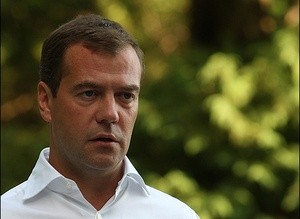 The announcement comes as a bitter disappointment to many in Russia’s environmental community, who thought they had won a rare victory when Medvedev ordered a halt to road construction in August and set up a commission to consider alternative routes.

But Vladimir Slivyak, co-chair of Russia’s Ecodefence environmental organization said that the latest government statements are far from the final word on the Khimki road project.

“Khimki has become a symbol for environmental protesters in Russia and that Russian government just made a big mistake attacking this symbol,” Slivyak told Bellona Web.

“The fight is not over and resistance will only grow,” he said.

Russia’s leading environmentalist Alexei Yablokov, and leader of the Green Russia faction within the liberal Yabloko opposition party immediately condemned Medvedev’s decision as “political” and  “dangerous to the Moscow area.”

“I think this decision is incorrect, a political decision –  it is in no way ecologically justified,” said Yablokov, according to news.ru. “It is dangerous for Moscow, for the Moscow area, and profitable only for construction contractors who will make big money.”

Yablokov underscored that the Khimki Forest, as one of the few big forests surrounding Moscow, is a valuable nature preserve. “It’s ecological role in cleaning the air, of defending against pollution, of producing oxygen is huge,” he said. 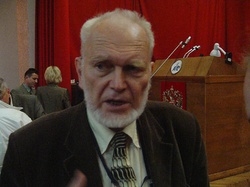 The Movement in Defence of Khimki Forest said isn’t ruling out legal action to save the ancient wood. One case regarding the forest is already before the European Court for Human Rights in Strasbourg, France.

But Deputy Prime Minister Sergei Ivanov, who chaired the commission,  announced Tuesday that the commission recommended that the $8 billion highway should run through the Khimki forest as originally planned.

“The decision will be fulfilled,” Medvedev’s spokeswoman Natalya Timakova told reporters later in the day.

Emphasizing that the decision could “not be decided by ecological factors alone,” Ivanov Tuesday told reporters that “from a legal point of view the specified route is completely justified.”

Many environmentalists, who say 65 percent of Russians oppose the forest route, refused to accept the news, saying the final decision still lay with President Dmitry Medvedev – not his spokeswoman or Ivanov.

“We still say what we said before: The decision still lies with Medvedev if he is really the president of our country,” Yaroslav Nikitenko, a spokesman for the Movement in Defence of the Khimki forest, told The Moscow Times “Now we’ll see whether he is on the side of the bureaucrats or the people.”

Nikitenko added that the environmental movement would return to the streets in protest, joining opposition protesters on Triumfalnaya Ploshchad on Dec. 31.

Trees, rights and journalists’ safety left at the side of the road

There is no guarantee the protests will turn out peacefully for those participating or reporting on them. The Khimki Forest controversy has claimed its share of casualties among the fourth estate and activists, and the decision to continue the build puts at jeopardy more than just the trees.

Most recently, Kommersant reporter Oleg Kashin was brutally beaten on November 6 in an attack that was caught on a security camera. The stomach turning footage was shown on State television and enraged the nation. When Kashin awoke from a medically induced coma, he told investigators that his attack was directly related to his coverage of the Khimki issue.

Mikhail Beketov, editor of the weekly Khiminksaya Pravda, who was highly critical of the road project, began receiving lurid threats as long ago as 2007 when his car was set ablaze and his dead dog left on his doorstep.

In November of 2008, he was attacked and left for dead in front of his apartment. The attack left him with brain damage and the inability to speak. Doctors also had to amputate four of his fingers and his right leg below the knee. He is still recuperating in hospital.

Also this November, environmental activist Konstantin Fetisov was beaten. No arrests have been made in connection to any of these attacks.

The government seemed determined to appease opponents by portraying the decision as a difficult choice between two imperfect options ­ one through the Khimki forest, and the other via the settlement of Vashutino.

Explaining their preference for the route through the forest, ministers said the alternative would be only marginally less expensive, take longer to build, and require the demolition of 50 houses. It would also require the felling of 90 hectares of forest ­ not much less than the 100 hectares to be cleared on the original route.

“The cost of the current plan is 51 billion rubles [$1.6 billion]; the alternative would cost 48.5 billion [$1.58 billion], not counting compensation for the houses and the land beneath them in Vashutino,” Transportation Minister Igor Levitin told the meeting Tuesday.

The residents who would have to move were deeply opposed to the idea, he said.

The government’s ‘compromise’ with environmentalists

Levitin, who forest defenders have accused of corruption in connection with his support for the road, said the eight-kilometre section of road running through the Khimki forest could be finished by 2013, but the alternative would not be ready before 2017.

In an apparent effort to appease environmentalists, Ivanov said 500 hectares of trees would be planted to compensate for the 100 hectares felled to make way for the road.

He also promised that no gas stations or other roadside buildings would be allowed on the section that runs through the forest, and that sound barriers would be erected on the sides of the road to protect local wildlife.

Yablokov remained unimpressed. “This is absolutely unrealistic compensation, there is simply no space for it. Where will they find these 500 hectares of territory in the Moscow area where they want to plant trees?

An independent environmental survey expected to condemn the decision will be released on December 20, Nikitenko said.