MOSCOW – In a second rally for press freedoms in a week, hundreds took to Moscow’s city centre to protest beatings of journalists and rights activists Sunday and voiced their outcry for two reporters particularly who have been severely beaten for their investigations into the Khimki Forest project.

Published on November 14, 2010 by Charles Digges 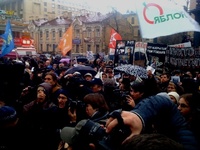 Further demonstrations, organizers told Bellona Web, are set to be staged in Khimki itself.

Sunday marked a little more than two years since Mikhail Beketov, 52, the editor of Khimskaya Pravda, was savagely attacked in front of his home for what his supporters say was damning coverage of a project to build a new highway between Moscow and St. Petersburg through Khimki Forest, an ancient oak wood north of Moscow.
[picture1 left]Beketov was the first reporter, but not the last, to be attacked for covering the expensive project whose contractors have close government ties. Yet the project was ceased over the summer on President Dmitry Medvedev’s orders for “further consideration” in the Presidential Council for Civil Society Institutions and Human Rights. No conclusions have been reached, but the council has forwarded several amendments to the Russian criminal code that would more severely punish assaults against journalists.

On November 5, Oleg Kashin, a reporter with the national daily Kommersant, was beaten in a brutal attack. Kashin was also covering the Khimki Forest story, and his attack, caught on closed circuit TV, was widely covered by Russian media, sparking nationwide outrage and international condemnation.
Facing both domestic and an international outcry, President Dmitry Medvedev gave unprecedented backing to reporters’ security following the Kashin beating, vowing to find the culprits “regardless of his position, place in society or accomplishments.”

Beketov has, since his attack, been confined to a wheelchair. His ability to speak has been impaired, and doctors had to amputate his right leg and four fingers. He was comatose for several months after his attackers left him for dead.

Beketov had also had to endure several trips from his hospital bed to court to face defamation charges brought against him by Vladimir Strelchenko, mayor of the Moscow satellite city of Khimki. Beketov, had, after his car was set ablaze in May 2007, accused Strelchenko of “political terror’ on a televion interview.

Though the court found against Beketov, it waived the nominal 5000 rouble ($160) penalty.

The recently mothballed investigation against Beketov, which yielded no arrests, was surprisingly reopened last week by the investigative committee of prosecutors.

Doctors put Kashin in an induced coma on his arrival in hospital, but his wife Yevgeniya reported on her blog Thursday that he had regained consciousness for the first time, Agency France Presse reported.

“Oleg is no longer being pumped with the sedatives, so he woke up,” she wrote, further dismissing reports that Kashin was now being interviewed by investigators.

Suburban Moscow reporter Anatoly Adamchuk claimed to have been assaulted early Monday after writing articles about Khimki. The police responded this week by accusing Adamchuk of staging his own assault.

And Konstantin Fetisov –  an environmentalist who also fought the forest’s removal for the road – reported being attacked last week.

The spate of incidents provides Medvedev with a chance to sharpen his liberal credentials and distance himself from the more nationalist and police-friendly forces that prefer to rally around Prime Minister Vladimir Putin.

The former foreign intelligence agent Putin and Medvedev are the two major – and perhaps only – players of Russia’s 2012 presidential election campaign.

Overall, Russia’s press safety record, as reported by international press freedom groups, is plummeting to embarrassingly low levels. According to Reporters Without Borders, 22 journalists have died over the last 10 years.

Local journalists, however, say that figure is nearly 10 times that. A paper edition of the Russia blog Kashin, which was distributed at Sunday’s rally listed 200 reporters who have disappeared or died since 2000 in an eerie accounting that took up an entire broadsheet page.

The disparities of the international and domestic tallies of reporter’s deaths aside, Reporters Without Borders situated the mortality rate of journalists in Russia to be worse than that of Turkey, and even Iraq, and only a nose ahead of Afghanistan.

Sunday’s protest was headed up by Yevgeniya Chirikova, the head of the Movement to Save Khimki Forest and a host of other political organisations, including the opposition political party Yabloko.

“Do not lay a hand on journalists and activists,” Chirikova told the rally. “Politicians, anti-fascists, rightists, leftists, journalists – we are all together and in this is our strength, and not in shooting someone, They are afraid of out unity. Therefore, let’s unite and say ‘No to terror against activists!’”
[picture2 left]Activists at Sundays protests for Beketov, Kashin, Fetisov Adamchuk came to make noise and they beat drums, blew whistles, shouted and clapped. They also carried numerous banners, some reading “Who will defend the defenders?” and, poignantly “Is the search for truth the path to death?”

Speaking to the demonstrator, Alexei Gaskarov, who may face seven years in prison for an alleged act of “hooliganism” during which windows of Khimki’s administrative buildings were smashed out, said, “All positive changes, such as stopping construction of the highway (through Khimki) have been paid for in blood.”

Speaking of journalists and activists working in opposition to the highway project, he added, “If you do your duty, they hate you. If you do you duty, they beat you.”

Nikitchenko further said that, “Recently, it became known to us that the contract of Teplotekhnik, the contractor for the clear cutting, anticipates continuing work even in the fact of the authorities’ moratorium. We will sue those who conduct illegal work in the Khimki Forest and will continue our fight.”