Russian Duma gets bill that would stiffen penalties for attacking journalists

A bill toughening punishment for attacks on journalists was submitted Friday to the State Duma, just as police said they had a “real chance” of solving this month’s brutal beating of Kommersant reporter Oleg Kashin, Russian press agencies reported.

Published on November 29, 2010 by Charles Digges 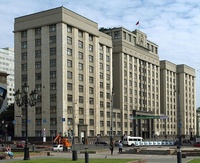 Meawwhile, Vsevolod Bogdanov, head to he Russian Journalists Union told the Interfax newswire that he supports the draft law, saying, “We are talking about journalists’ health: we must see and hear well, to tell the public what is really happening and defend their interests.”

But not all high profile journalists and defenders of journalists’rights in Russia are in agreement on the bill.

Mikhail Mikhaylin, editor-in-chief of the daily Kommersant told Interfax that current laws were “enough” to fight crimes and attacks against journalists and that “the best way to prevent crime is to make punishment inescapable.”

Kashin, who was savagely beaten in a November 6 attack that was caught on a video surveillance camera, works for Kommersant.

The release on Russian state television of the horrific footage, which showed one assailant holding Kashin down while another beat him with a pipe, infuriated the Russian public and was a major impetus for Russia’s Public Chamber to submit suggestions for the bill.

Mikhaylin told Interfax he was also surprised that the new draft law had not been discussed with the professional community.

“Nobody asked our opinion, and this is very sad,” he said.

What the bill says

The bill proposes introducing a separate article in the Criminal Code on preventing journalists from fulfilling their duties through violence or threats, said Irina Yarovaya, a co-author of the bill, Interfax reported.

Killing or maiming journalists, or threatening to do so, would be punishable by jail terms of six to 15 years, while lesser violence, currently not subject to imprisonment, would land offenders behind bars for two to five years. Non-violent obstruction of a journalist’s work would carry a sentence of up to two years.

Gutiontov told Ekho Moskvy that “the draft law looks a bit like a mockery” because it does not make sense to increase penalties for uncaught criminals.

He said it is more important to “respect the existing laws” and complete the investigations of crimes already committed.

“First, things must be put in order in the police, courts and prosecution bodies, and only then stricter punishments should be introduced,” Gutionov said.

No date was set over the weekend for a hearing on the draft, submitted by several lawmakers with the ruling United Russia party.

A senior law enforcement source told the RIA-Novosti newswire that arrests may be close in the Kashin beating, and cited unspecific “real results” accomplished by investigators in the case.

Kashin – who related his attack specifically to his coverage of the Khimki Forest issues – remains hospitalized and under police protection after the assault that left him with multiple broken bones, including his jaw and fingers. A composite picture of a suspect in the beating was leaked to the press last week after Kashin regained consciousness from a medically induced coma and spoke to investigators.

Mikhail Beketov, the 52-year-old editor of Khimskaya Pravda, also suffered a near fatal attack in November 2008. Also a vociferous critic of the $8 billion project that would run a highway to St. Petersburg through the Khimki Forest north of Moscow, Beketov’s attack left him with brain damage and unable to speak. Doctors also had to amputate his right leg and several of his fingers.

The investigation into Beketov’s beating had been closed until public outcry against the beating of Kashin, yet another reporter covering the Khimki situation, prompted the prosecutors office to reopen his case. No arrests have been made.

Beketov made a surprise appearance from his hospital bed at a Moscow rally for press freedoms last week, one in a series that have been taking place ever since Kashin’s attack.

After a summer of protests and rallies, some featuring Russian and international rock stars, such as U2’s Bono, the Kremlin halted tree felling in the Khimki Forest for further consideration of alternative routes for the highway.

Vladmir Strelchenko, mayor of the Moscow satellite city of Khimki and a proponent of the highway project has denied any connection to the attacks on Beketov and Kashin.

President Dmitry Medvedev has pledged to have the attackers punished “regardless of their social status,” an indirect acknowledgement that the assault could have been ordered by officials Kashin criticized in his publications.

There are an average of five attacks on journalists per month in Russia, Mikhail Fedotov, head of the Kremlin’s human rights council, told Interfax earlier this month. The Glasnost Defense Foundation has said that at least 30 attacks against journalists, including eight murders, have been registered this year.

Nineteen murders of journalists in Russia remain unsolved since 2000, according to the New York-based Committee to Protect Journalists. Reporters without Borders puts that figure at 22. The group also said that Russia is a more lethal atmosphere for reporters than Iraq, and boasted journalist mortality rates that are only slightly better than Afghanistan.