Mikail Beketov, the Russian environmental and investigative reporter suffering from brain-damage and confined to a wheelchair after a 2008 attack made an unprecedented appearance Sunday at a Moscow rally on Pushkin Square demanding Kremlin answers to a spate of recent anti-media attacks, one of several such recent gatherings, press reports said.

Published on November 21, 2010 by Charles Digges 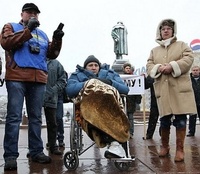 The sanctioned Moscow rally saw some 150 demonstrators hold up signs reading “We have had enough fabricated criminal investigations” against reporters and “A corrupt investigator equals one hundred broken lives.”

The Public Chamber last week also made a statement in support of stiffening penalties within the Russia criminal code for assaulting journalists.

In a statement, the Public Chamber said that over 100 cases of “interference” with the work of journalists had been registered in October 2010 alone, including “threats” and “attempts at censorship”.

The signs at the demonstration reflected a sense among human rights advocates that Russia was doing more to prosecute opposition reporters than it was the people who were investigating the often-brutal beatings.

Beketov, 52, was the editor of the Khimkinskaya Pravda weekly published in the district of Khimki outside Moscow when he came under attack in 2008 in a beating that left him brain-damaged and unable to speak. He was left for dead by his attackers and laid overnight in his courtyard before being discovered.

He has since undergone eight operations that deprived him of his lower right leg and four fingers, and he continues to live under doctor’s supervision in a clinic.

Beketov had been following controversial plans to build an $8 billion highway through the Khimki Forest, an issue also covered by a prominent reporter with the daily Kommersant, Oleg Kashin, who was brutally beaten in a November attack that was caught on a security camera.

The horrific footage of appeared on state television and drew an outraged reaction from both the Russian media and Western governments.

The video footage of the attack shows one assailant pummelling Kashin with a metal bar while the other holds him down.

Konstantin Fetisov, an environmentalist who opposed the razing of the forest, was badly beaten just days before the Kashin attack.

Khimki boil over of last summer

The Khimki Forest debate also galvanized environmental opposition over the summer. Hooded men disbanded the Movement to Save Khimki Forest last summer when it was camped out in the wood to monitor the tree felling, for which the environmentalists said the contractor, Teplotekhnik, does not have the necessary permits.

Teplotekhnik has in turn lodged a civil suit against Yevegniya Chirikova, the leader of the Movement to Save Khimki Forest, other activists and two reporters.

During the near fisticuffs with the hooded men, environmentalists called police, only to find themselves getting rounded up and charged with obstruction of police activities for trying to prevent police from leaving the scene where they said they found no evidence of violence.

The Public Chamber, which was tasked with weighing alternative routes for the highway project, has yet to arrive at a compromise that will suit all interests. The Euopean Bank for Reconstruction and Development and the Eurpean Investment Bank have meanwhile withdrawn funding pledges for the highway project until human rights and environmental issues surronding the build are sorted.

Kashin, who was initially put into a come by doctors to protect his brain functions, last Wednesday spoke to investigators and made a direct link between his attack and his coverage of the Khimki Forest, Lifenews.ru reported.

Kashin provided investigators with a detailed description of one of the two attackers who pounced on him near his apartment building in central Moscow early in the morning of November 6, the Lifenews.ru report said.

Russian President Dmitry Medvedev initially responded to public outcry over Kashin’s attack by vowing to catch Kashin’s assailants even if they were high-level officials, and by doing more to protect reporters who write on sensitive issues.

But last Wednesday, according to news reports, Medvedev said during a news conference with visiting Slovenian President Danilo Turk that, “”Now [the investigation] is not a matter for the president of Russia but a matter for law enforcement. Let them work.”

No culprits in Beketov or Kashin’s attacks have been found. The investigation into Beketov’s attack was closed earlier this year without any arrests, but it was reopened by prosecutors.

Meanwhile, a suburban Moscow court actually convicted Beketov of slandering the Khimki mayor, Vladimir Strelchenko, by accusing him of “political terror” in a 2007 television interview. Beketov’s remarks followed someone setting his car ablaze in May of 2007, and Strelchenko flled suit that August.

Strelchenko, who strongly backs the highway project through the Khimki Forest, has denied any role in the attacks against Beketov, Kashin or Fetisov.

Beketov – who had been forced from his hospital bed to attend hearings in the defamation suit broght against him by Strelchenko even while Strelchenko himself initially refused to appear – was provisionally sentenced to pay small fine. Beketov’s treatment through the trial drew the outrage of international press rights groups, including Reporters Without Borders.

Beketov appeared at the Pushkin Square rally bound in a heavy blue parka and a blanket, Agency France Presse reported. His presence added urgency to the latest of what has become a series of such small Moscow opposition gatherings, with one person shouting through a loud-speaker that “these crimes will definitely continue” until Beketov’s and the others’ assailants are found.

Reporters Without Borders has evaluated the mortality rate of journalists in Russia to be worse than that of Turkey, and even Iraq, and only a nose ahead of Afghanistan.