Thousands turn out for Khimki Forest concert rally in Moscow

According to environmentalists’ estimates, more than 3,000 to 5,000 people crowded onto Moscow’s Pushkin Square on Sunday evening to denounce the authorities’ plan to cut down a centuries-old oak forest north of Moscow, and famed rocker Yury Shevchuk belted out two songs despite a concert ban. 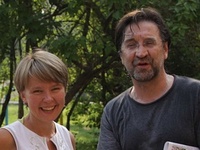 The Khimki Forest has been a lighting rod of protest for several years. Authorities plan to build a high speed toll road between Moscow and St. Petersburg which would cut directly through the forests.

Media and reporters who have taken up the cause of the forest have found themselves the target of beatings. And over the course of the summer, environmentalists who have tried to protect the forest have been harassed and driven out by unknown hooded thugs.

Environmentalists have also vociferously complained that companies involved in clear cutting the Khimki Forest do not have logging or building permits to do so, and that there are, in any case alternative routes for the highway.

While Sunday three-hour rally ended peacefully, police earlier in the day detained three prominent opposition activists who had planned to attend and blocked vans carrying the musical equipment of other musicians from the square, Russian media reported.

The prominent opposition members who were detained claimed they were simply celebrating Russia’s National Flag Day.

“The flag is a symbol of freedom and democracy, but not for [Prime Minister Vladimir] Putin,” said Solidarity movement leader Boris Nemtsov, who was among those detained. Also detained were Solidarity leader Mikhail Shneider and human rights advocate Lev Ponomaryov.

Many demonstrators said they came to voice their opposition of both the deforestation in Khimki and of Prime Minister Vladimir Putin.

Sunday’s protest marked the largest in a weeks-long series of rallies to oppose federal authorities’ decision to raze part of the forest to make way for an $8 billion highway to St. Petersburg. The protesters say it is possible to construct the road around the forest without cutting down the trees.

City Hall allowed the rally, but not a concert that organizers had wanted to stage, in a rare authorization of an opposition event in recent years. The anti-Putin sentiment and the relatively large turnout could prove worrisome to the authorities, coming a day after 3,000 people called for Putin’s resignation at a rally in Kaliningrad.

The concert’ organizers – representatives of Defenders of the Khimki Forest, the World Wildlife Fund and the Solidarity movement – all made separate announcements that there was no legal reason to musicians from performing a few songs during the demonstration. 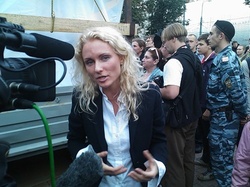 In what some saw as a heartening sign, local authorities “sanctioned” a star line-up including rock veteran Shevchuk of DDT and Televizor to perform, but changed their minds at the last minute, saying no sound equipment could be used, only megaphones, which were not easy to get hold of at such short notice.

Thousands of police, who cordoned off the square hours before the event, warned passers-by they had better go home or to the nearby McDonald’s, saying there would be no concert anyway.

But the silencing of the concert turned the thousands strong gathering into a political rally.

Many more bands and singers, including Alexander F. Sklyar, Barto, Televizor and OtZvuki Mu, were expected to perform but could not enter the square. Cars with concert equipment were barred by the police from entering the site.

Despite the concert ban, Shevchuk, frontman for rock band DDT, sang his hits “Osen” (Autumn) and “Rodina” (Motherland) on an acoustic guitar standing on an improvised stage on a truck, surrounded by scores of journalists, police and demonstrators, including Yevgenia Chirikova, who spearheads the campaign to protect the Khimki forest.

After Shevchuk’s two song performance, the stage soon turned into a political podium as environmentalists and opposition leaders took the floor.

“They don’t let us breathe, they don’t let us talk! What else should we do to make them hear us?” yelled Chirikova as the crowd chanted “Russia without Putin!” and “Freedom to political prisoners!”

“Stop paying attention to the vertical, bring back the horizontal!” Mikhail Borzykin of the rock group Televizor called out, according to RIA Novosit Russian news agency.

“I am ready, are you ready to set cops’ cars on fire?” the Moscow band Barto sang to a cheering crowd.

“We will be free, let the authorities steal, they can’t steal our freedom,” renowned Russian rock critic Artemy Troitsky said, according to the agency, adding that the event was unprecedented because it had been “sanctioned.” Most protests in Russia are broken up by police for being “unsanctioned.”

More than 3,000 people crowded into the cordoned-off square after passing though metal detectors, which saw long lines. Some carried the flags of opposition groups and chanted, “Putin resign!” the Moscow Times Reported.

Police officers cordoned off the area. One officer told newspaper that about 1,500 officers had been deployed.