MOSCOW – A round-table discussion held in earlier this month by the Russian foreign ministry’s Diplomatic Academy on the current status and future of the global climate debate has apparently forged new goals and guideposts for the Russian climate policy. Talking points on the agenda included a more dynamic role for Moscow to play in climate negotiations and the expected launch of the Kyoto mechanisms on domestic grounds. The Kremlin keeps pushing for a unification of the two ongoing negotiation processes – on the Kyoto Protocol and the UN Framework Convention on Climate Change – but, some experts warn, a new legally binding and comprehensive climate change agreement may not become a reality before 2013.

Published on March 14, 2010 by Angelina Davydova, translated by Maria Kaminskaya 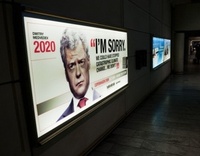 Gathered for the round-table discussion at the Diplomatic Academy of the Russian Ministry of Foreign Affairs – the event was entitled “Results of the UN Copenhagen Conference on Climate Change: Russia’s Prospects” – were over forty experts in climate change and the ongoing global debate on the climate crisis. The conversation centred on attempts to work out a cooler-headed assessment of the outcome of the December 2009 summit – a three-month rebound period may have helped recover from what many saw as quite an upsetting debacle – discuss Moscow’s current position on the issues, and try to anticipate what possible scenarios climate negotiations may take in the near future.

Despite the shared disappointment over the results of the Copenhagen conference – Vitaly Matsarsky, a representative of the UN Framework Convention on Climate Change (UNFCCC) Secretariat, noted the negotiations had been so taxing as to call to mind the “worst moments of the Cold War” – the participants were trying to cheer each other up by unearthing what positive aspects they could in the agreement that had finally been reached in Copenhagen, to concentrate on future efforts.

Alexander Bedritsky, the climate adviser to the Russian President, Dmitry Medvedev, was one of those who tried to focus on the upsides of the agreement. He noted that the Copenhagen summit had become the first UN climate change conference that had featured appearances by heads of state and top government officials. His was also a rather optimistic assessment of the resulting Copenhagen Accord as one “acceptable for everyone”: The new document, he said, was “in line with the ideology of the plan of action worked out in Bali.” According to Bedritsky, both the Kyoto Protocol and the Copenhagen agreement are now there for climate debate participants to help formulate objectives to continue the work, yet the latter offers little besides the opening clause to serve as a basis for a new, post-Kyoto climate deal. Medvedev’s point man for climate said the new accord “has an assembly kit, but no design.”

Yet, Bedritsky underscored, over seventy nations have already outlined their intentions in Appendices 1 and 2 to the agreement, and thirty more countries are willing to support the agreement and continue working in the framework provided by it.

At the same time, the official Russian position remains rooted in Moscow’s opinion that the two tracks along which negotiations are currently proceeding should be joined into one comprehensive line of climate bargaining. For now, the UN is dividing its attention between two parallel negotiation routes – one that is focussed on the Kyoto Protocol and another that is focussed on the UNFCCC – with the United States’ refusal to ratify the protocol being the main reason for that fork in the road. According to Bedritsky, “it’s clear that, like before, nothing will come out of this scenario – we need to radically solve the issue of uniting the two processes, because everything that could be done to improve the mechanisms of the Kyoto Protocol, has been done already.”

Russia’s place in the ongoing climate debate was another issue under discussion at the round table. Tatiana Avdeyeva from the Diplomatic Academy suggested Russia needed to play a bigger role in climate negotiations. “It’s good that we now have a climate adviser to the president, it would now be nice to have an interagency body, as well, which would work with climate issues,” Avdeyeva said. She also proposed to look beyond the ties of traditional partnerships Russia has been holding onto and seek more climate cooperation with China, India, and other transition economy countries.

Similarly, Bedritsky added, Russian science must start regaining the global leadership role it used to enjoy before, and Russia needs to enhance its presence in the Intergovernmental Panel on Climate Change – the expert body established by the UN for the assessment of climate change.

Moscow also needs to begin realisation of the Kyoto Protocol mechanisms in Russia, Bedritsky said, including cap and trade and joint implementation projects, and start participating in initiatives aimed at providing financial support for climate activities in developing countries, both in purely financial matters and at the level of strategy development and decision-making.

One of Bedritsky’s other suggestions was for Russia to initiate adaptation and equipment delivery projects for scientific observations and research into climate change processes on the territory of former Soviet republics, as well as to create a unified emission quota fund shared together with the Ukraine and Belarus. Selling these quotas could go toward acquiring necessary climate technologies. According to Bedritsky, the Security Council of the Russian Federation is soon to hold a meeting to discuss Russia’s Climate Doctrine, with the Ministry of Economic Development preparing additional recommendations on the implementation of the doctrine, ways to further decrease climate burden, and on potential opportunities for modernisation – one of the major domestic issues advanced by the current Russian administration.

The idea that kept threading throughout the round-table discussion was the notion of pushing Russia further ahead to the frontlines of everything related to climate change – from science and technology to policies and funding mechanisms – and doing that at the very top level of the global debate, too, those upper tiers that involve strategic decision-making, defining global political priorities, and, in general, those that would allow for a better recognition of Russia’s efforts on the global climate scene.

The desire to see Russia “in the centre of climate developments” was expressed by quite a number of participants. For instance, the Foreign Ministry’s Avdeyeva spoke of European countries planning to introduce environmental taxes and subsidies and suggested Russia should keep a close watch over global environmental initiatives and make decisions in accordance with how this situation develops further. Bedritsky expressed concerns over the United States possibly going ahead with adopting measures that would curb the import of goods that fall short of certain climate standards, referring to such measures as protectionist and at odds with a number of articles in the UNFCCC.

The onion layers of negotiations

Other points of discussion included the significance of the climate debate process as such – especially, in light of the Copenhagen fiasco. UNFCCC representative Matsarsky, while acknowledging the “declining morale” in the UNFCCC ranks, said that climate negotiations have at the same time long “outgrown” the subject of climate per se.

Matsarsky compared the subject of climate and climate change with an onion, where the upper layer would be science, but right underneath it – because science necessarily spurs ahead discussions about how to cut emissions via modernisation in the energy economy and energy use – is the layer where an attempt is being made to revamp the entire global economy through energy policies. Further on still, there is the layer of economics, which in turn covers a layer of politics, and deeper still is the layer of law, where terminology issues are being settled – like the one dealing with the precise interpretation of the term “legally binding.”

Matsarsky also said an additional negotiation session will be held by the UNFCCC in Bonn, Germany, between April 9 and 11, adding that members of the so-called BASIC group of large emerging economies – Brazil, India, China, and South Africa – have proposed to hold at least another five preliminary meetings before parties to UNFCCC convene next for a conference in Cancun, Mexico, late this year. He is, however, pessimistic about the Mexico summit being able to break the latest negative trend and lead to the signing of a new global agreement.

“There will definitely be no agreement before 2013,” Matsarsky said.