Thousands take to streets during Copenhagen climate talks, urging negotiators to listen to the people

COPENHAGEN – Thousands of climate protestor took to the streets gathering in this city’s Christiansborg Castle square and vowed to march six kilometres to the Bella Center, where the climate negotiations are taking place to deliver the message that politicians are radically out of touch with the needs of the world.

Published on December 12, 2009 by Charles Digges 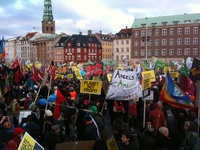 Police, many dressed in riot gear, estimated the number of protestors who gathered in force on the square – where various politicians actors an even a supermodel – were present to give pep talks, to be 25,000. By 4 pm local time, however, the Danish news website Politiken.dk put the number of activists at 100,000 as the march gathered momentum as it crossed the city. The march began at 1 pm. Solidarity protests held earlier for the climate in Australia reached some 50,000.

Activists in Copenhagen held signs against the gleaming backdrop of golden spires that read, “Bla, Bla, Bla – Action Now,” “Nature does not compromise,” and “There is no Plan B because there is no Planet B.” Placards were to be found in dozens of other languages as well, from Russia, to Arabic, to Urdu Danish, German and more.

Copenhagen police questioned on the street at the beginning of the March said all had so far progressed peacefully. But by later in the day, some 300 to 400 people had been taken into custody as the march progressed toward the Bella Center, a police spokeswoman told Bellona Web in a telephone interview. When asked what people were being held for, the spokeswoman said, “I am not sure, but it is surely for something illegal.” 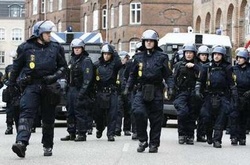 The sheer number of bicycles in evidence in the crowd throng, and in Copenhagen in general, seemed to espouse that. Jeppe Veolkmann, 27, brought out his 29-year-old wife Julie and nine-month old daughter to Christainsborg Castle in a sort of modernized rickshaw that he said was his family’s statement against using a car

“There are very few in Copenhagen who don’ use bikes,” he said. “We don’t want to own a car and we hope that other cities will learn from Copenhagen,” said Veolkmann.

According to statistics provided by Copenhagen’s city administration, some 37 percent of its 526,000 resident travel by bicycle, even through the northern capital’s cruel winters.