COPENHAGEN – Norway and Mexico launched a joint model for climate funding at the climate change negotiations in the Danish capital of Copenhagen over the weekend said the Norwegian government, in an effort to quell the tensions between rich and poor nations that have been on the rise here since the UN Climate Talks began.

Published on December 13, 2009 by Charles Digges 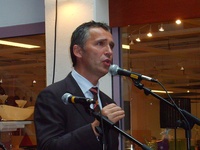 The event passed with little notice, but could, among other proposals that have been tabled here in Copenhagen help poor nations to reach funding goals for climate change adaptation.

The model, which seeks to set up a Green Fund for financing climate actions in developing countries, will be built on contributions from public budgets and auctions of UN allowances, according to a press release issued by the Norwegian prime minister’s office.

Mexican President Felipe Calderon and Norwegian Prime Minister Jens Stoltenberg agreed that it is crucial to reach an agreement on financing climate actions in developing countries in order to make the Copenhagen conference a success.

“We hope that through our joint proposal we can help develop a funding model everyone can endorse,” the two leaders said in a joint statement to the press.

It is necessary to combine complementary sources of financing and this money should finance adaptation and mitigation efforts in developing ones, stressed the two leaders, noting that financing should “be based on results.”

Other funding promises coming up short

In the short term, poor countries mainly in the G77 bloc of developing nations and the Association of Island State (AOSIS) – who stand to lose the most should binding agreements not be reached within a year or two, have received a pledge of €7.2 billion ($10.7 billion) per year for the years 2010 to 2012 from the European Union.

G77 and AOSIS nations have diminished the EU’s proposal acrimoniously. Lumumba Di-Aping, the Sudanese diplomat who speaks on behalf of the G77, has been especially scathing regarding the EU proposal, pointing out correctly that much of the money had already been allocated and was simply being repackaged as “fast start” funding, as it is called by the EU.

Swedish Prime Minister Fredrick Reinholdlt, whose country holds the EU presidency until the end of this month, acknowledged that some of the “fast start” money was indeed coming from earlier funding promises.

The joint model propose by Mexico and Norway has combined both of the two sides’ earlier proposals tabled separately at the negotiations, and would pick up, in 2013, where the “fast start” agenda ends – though fast start is part of a larger climate funding fund meant to eventually reach $100 billion.

Norway’s proposal was a model according to which a certain percentage of the total UN allowances would be allocated for international auction to raise funds for climate actions in developing nations.

Meanwhile, Mexico had earlier proposed to establish a Green Fund that assigns a funding quota based on each countries’ emissions, its gross domestic product (GDP) and population.

The joint model defined that the most vulnerable countries, along with the least developed countries and small island developing countries, will be given priority in the funding process.

Under the United Nations Framework Convention on Climate Change, developed nations are committed to quantified emission reduction targets and provision of support in financing, technology and capacity building to developing nations.