COPENHAGEN – With questions of how to help finance climate change mitigation measures in the word’s poorest nations still hanging heavy in the air at the Copenhagen climate talks, billionaire philanthropist and promoter of democracy suggested opening the gold reserves of the International Monetary Fund at a Bellona hosted event on the sidelines of the summit. 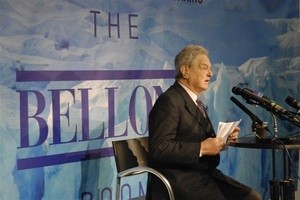 The idea was timely after Wednesday’s talks closed with an acrimonious air between the world’s haves and have-nots that was struck when the G77 group of developing nations and the Association of Small Island States ripped into wealthier players in the talks for stalling on signing a binding legal document.

The delay – which leaders of the world’s richest nations have already agreed to –  extends the luxury of more time to reach an agreement to the wealthy and large, while the small and poor are already bearing the brunt of global warming, said Sudan’s Lumumba Di-Aping and Ian Fry, a negotiator for the Polynesian Island nation of Tuvalu.

Soros, 79, who has made a name for himself primarily by putting his fortune to work in the democratic political development of, most notably, former Eastern Bloc nations, is not entirely new to the environmental sphere.  Earlier this year, he said he planned to invest $1 billion in the development of environmental technologies.

At his Bellona press conference in Copenhagen, Soros suggested a unique proposal that may prove to be worth its weight in gold.

“There is a financing gap between the rich and poor countries, but rich countries have recently acquired more debts and are hesitant to add to their national deficits,”  Soros told a packed house in the Bellona Room at the Bella Center where the negotiations are taking place.

“But the money does not necessarily have to come from the national budgets, it can come from ‘SDRs,’ a financial instrument guaranteed by the IMF’s gold reserves,” he said, referring to Special Drawing Rights, which can be converted into financial instruments based on American dollars, British pounds, Japanese yen or Euros.

Soros suggested setting up a fund of SDRs worth $25 billion over a 25-year period.

Under Soros’ plan, the interest payments would be guaranteed by the IMF gold reserves such that developed countries would have no responsibilities and bear no interest rates. In sum nothing, or perhaps just a little bit, of the gold would in the end actually have to be spent.

In spite of certain technical difficulties that Soros himself addressed, he nonetheless believes the proposal to be practical and doable. He says there is precedent for a lending system such as this. But Soros said that the main impediment could prove to be United States, which would have to draft and pass legislation in Congress.

“What is lacking is political will. But through public support, the pressure can rise for this to come through,” said Soros.

“The main message is that it is possible to substantially increase the amount available for fighting global warming by using SDR’s, and that existing gold can cover the interest,” he said.

“The world needs proposals like this one from Mr. Soros,” said Frisvold. “One of the greatest obstacles for achieving success in the Copenhagen negotiations is the lack of funds for climate mitigation in developing countries. Mr. Soros’ proposal is important and constructive.”

The EU nations had a summit meeting in Brussels today, and climate change is high on the agenda. Sweden opened the meeting by announcing a pledge of €800 million for climate mitigation in developing countries.

“To end the disagreements between the EU members, countries have to put money on the table. It is welcome news that Sweden, who now holds the chair, are setting an example,” said Frisvold.

Sors’ press conference with Bellona was covered by such media as the New York Times, Reuters, and the Associated Press.