COPENHAGEN – More people were crushing into the Bella Center negotiations facility today as several high level-leaders begin arriving for sessions this evening, and talks seemed to be back on track after a late night grind yesterday that won developing nations several significant concessions.

Published on December 15, 2009 by Charles Digges 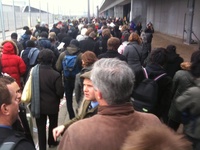 The concessions had come at a high price of precious time after a 132 delegates representing poorer nations of the G77 bloc suspended talks yesterday for five hours when it appeared to them that Connie Hedegaard, the Danish president of the UN talks, was sidelining their desires to hold talks on maintaining the Kyoto Protocol by trying to wrap all issues into one discussion.

Hedegaard spent these hours helping the delegations simmer down, and convincing them that Kyoto cuts were still on the agenda before negotiators reconvened late yesterday afternoon.

Informal talks will proceed along the two “parallel tracks” favoured by developing countries, in particular on maintaining the Kyoto Protocol.

But the final high-level session starts on Tuesday evening, and much remains to be done if a deal is to be signed hereby Friday.

UN General Secretary Ban Ki-Moon, who arrived today, had a message for delegates at centre this morning as well, telling them to “stop pointing fingers” and raise their climate targets. Ban wants negotiators to settle their differences within the next several hours, saying it would be a “serious mistake” to leave the main negotiations to world leaders.

“This is a time where they should exercise the leadership,” Ban told reporters outside the Tycho Brahe auditorium, which is the heart of the negotiations.

Britain’s Prime Minister Gordon Brown will be among the first heads of State to arrive today. The final high level home stretch for the some 120 heads of state expected to attend kicks off this evening. Speeches are also expected tonight from Secretary General Ban, Danish Prime Minister Lars Lokke Rasmussen and Prince Charles.

But the arrival of the dignitaries looks to bring with it a sweeping of NGOs from the halls of the centre in a move that has prompted several organisations to write harshly to the UN and the Danish government with accusations that the talks will become increasingly opaque.

Indeed, with just the press to offer an accounting of what is going on inside the Bella Center, the grassroots, on the ground back-and-forth between negotiators and the people they purport to represent will be lost, and leaders able to settle comfortably into a position of politics as usual while they ready their pens to sign what is thrown before them.

Bellona itself – many of whose members are either still in line as of this afternoon, or who were denied entry – would be forced to shelve more than a dozen of its solution oriented side events, which have been a highlight of the NGO halls, and a forum for the public to meet high level participants in the delegations.

Following Monday’s suspension of talks on points raised by the African group, supported by the wider G77, some sessions ran long into the night as negotiators tried to make up for lost time.

Developing countries are adamant that developed nations still inside the Kyoto protocol, and that all signatories of the protocol, which excludes the US, must commit to further emission cuts under its aegis.

After discussions with the Danes and UN climate convention officials, the informal talks were split as the G77 bloc had demanded.

One group, chaired by Germany and Indonesia, is examining further emission cuts by developed nations under the Kyoto Protocol.

Another, chaired by the UK and Ghana, is looking at long-term financing to help poorer countries develop along green lines and protect themselves against impacts of climate change.

A senior Chinese official, meanwhile, told reporters that China would not accept any money from the west for these purposes. This will carry political significance in the US, where some legislators are adamant that domestic carbon-cutting measures must not hand funds to the country poised to become its biggest economic rival.

Here, the positions of the world’s two largest emitters are very much at odds, with China rejecting US demands that its emission curbs must be subject to international verification.

Far more people have applied to attend the summit than Copenhagen’s Bella Center can hold, and their numbers will be dropping as world leaders begin to arrive.

After chaos over access to the Bella Center on Monday, when thousands of people already registered to attend queued for hours in a vain attempt to pick up their accreditation, progressively tighter restrictions are being applied to NGOs for the rest of the week.

NGO numbers will be limited to 7,000 on Tuesday and Wednesday, falling to 1,000 on Thursday and just 90 on Friday, summit officials said.

A group of more than 50 organisations including ActionAid, Friends of the Earth and CAFOD has written to the Danish hosts of the Summit and the UN climate convention secretariat accusing them of “undemocratic” behaviour.

“The presence of the public ensures that the substance of the matters being discussed at the negotiations are subject to public scrutiny,” the letter says.

“The process of arriving at these outcomes must be fair, open and transparent. The legitimacy of this process is at stake.”

Even party delegations from various negotiating nations will be scaled down, according to one party official. Some 45,000 are registered to attend events and talks at the Bella Center, nearly half of them NGOs. According to Danish fire code, however, the official capacity for the building is 16,000.