Time has run out for an internationally binding agreement in Copenhagen, says UN’s chief climate negotiator

BARCELONA – The last of the climate negotiations , taking place in this city, before a clash of the Titans is unleashed in Copenhagen in December are showing little evidence that the Decembers UN talks will produce a legally binding agreement to replace the Kyoto Protocol, say climate negotiators. 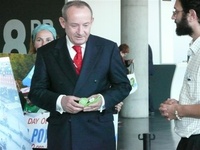 The Barcelona gathering of climate negotiators is the last such meeting prior to the big show in Copenhagen – also known as the Conference of Parties, or COP 15 –  where it has been hoped that an international treaty would bind 180 nations to signing off on reducing greenhouse gas emissions.

“The world needs a reminder,” said Yvo de Boer, chief negotiator for the UN climate negotiations when he received an alarm clock from TckTckTck, an international climate change pressure group, during the last negotiation sit-down before Copenhagen.

But even de Boer has lowered his expectations in Copenhagen, and no longer has faith that talks there will produce a legal, ratifiable agreement to reduce the world’s greenhouse gas emissions.

At a meeting with non-governmental organisations (NGOs) during the Barcelona negotiations, de Boer himself began to outline options to a legally binding agreement.

Bellona: Opportunities must be created
Bellona has long worked toward, and placed its hopes in an international climate agreement to limit global warming to two degrees, as so recommended by the UN International Panel on Climate Change (IPCC).

“We must be willing to see with our eyes that many years of work with the the Kyoto Protocol must now take new forms,” said Bellona’s international director, Svend Søyland, who is in Barcelona this week to observe the negotiations.

“It unfortunately no longer seems realistic to achieve a legally binding agreement. Now we must be sure to create other opportunities for deep cuts in worldwide greenhouse gas emissions,” he said.

Too little time
According to de Boer, there is no longer reasonable to expect a juridically binding agreement as that which was passed at the COP 13 negations in Bali in 2007, which should be finalised in Copenhagen this year.

The agreement that emerged from COP 13 – called the Bali Roadmap – committed all developed countries to take on quantified greenhouse gas emission reduction targets, while committing developing nations to obligate themselves to "nationally appropriate mitigation actions."

This essentially meant that developing nations had no need to take on any emissions ceilings, but all 190 nation participants of COP 13 were nonetheless required to sign on for “measurable, verifiable and reportable” plans of action that would state "long-term global goal for emission reductions,” although no numbers or time horizons were mentioned explicitly. Reductions of 20 to 40 percent, however, were mentioned in a footnote to the IPCC report that emerged from the conference.

In Barcelona, de Boer drew the conclusion that there is not enough time and that too little had happened up to this point – and that time will have run out by the end of the climate Summit. He noted additionally that many countries are not yet ready to sign a legally binding agreement.

In many cases, as might turn out to be the case with the United States, the reasons for this is in many cases not reluctance, but rather a given country’s political process. For the United States to ratify any treaty emerging from COP 15, both the Senate and the House of Representatives will have to approve it. And Congress is currently bogged down in debates over health care, economic recovery and other pressing issues close to home.

Because the United States and the presidency of Barack Obama is seen as such a driving force behind the success or failure of the negotiations, many involved organisations, such at the Washington-based Union for Concerned Scientists, as well the UK’s Lord Nicholas Stern – author of the trenchant Stern Review, an economic analysis of the devastation world climate change will cause – have suggested putting a year’s moratorium on the climate negotiations, hopefully giving Obama enough time to reign in US domestic issues such that the entire government is ready to focus on climate change.

Alternatives to an agreement
Chief Negotiator De Boer became internationally known while, at Bali’s COP 13 and clad in a Hawaiian shirt, he left the podium in exhaustion due to a chaotic lack of progress. The negotiations eventually got back on track, and the parties agreed to the Bali Roadmap.

Now, according to de Boer, it appears that the Copenhagen Summit will be “a set of decisions” instead of a ratifiable agreement. These statutes can follow the four heading that negotiations have thus far aimed for, namely cuts in greenhouse gas emissions, or mitigation; adaptation to climate change, or adaptation; financing, and technology transfer.

Such a “decision package” would be stronger than a political agreement, but weaker than the legally binding charter which has been the target of the negotiations. The Articles can later be negotiated into a legally binding form, the earliest opportunity for which will be at the next annual meeting, COP 16, in Mexico.

The final decision about what form a deal might take will be made when world leaders meet in Copenhagen next month.