ST. PETERSBURG – When, in June 2001, a block of flats crumbled in the village of Chersky, in the upper Kolyma River area in Russia’s Far Northeast, it was no terrorist act, nor an explosion of a gas tank that had prompted the accident. In a much more prosaic turn of events, the leaking rusty plumbing and central heating pipes had eaten away at the foundation, which finally gave way. Yet, as a closer inspection later revealed, the main cause was the thawing of the permafrost: The building collapsed because of the global warming.

Published on November 4, 2009 by Lina Zernova, translated by Maria Kaminskaya

Buildings, pipelines succumb to rising temperatures
According to the latest data from the Russian Federal Service for Hydrometeorology and Environmental Monitoring, global temperatures have risen by 0.75 degrees centigrade in the past 100 years. In Russia, temperature rise has been on average more pronounced – 1.29 degrees. Furthermore, this troubling dynamic intensifies west to east: In Western Siberia, temperatures have gone up by 1.5 degrees, whereas in territories surrounding the great Lake Baikal, in Southeast Siberia, close to the Mongolian border, global warming has led to a temperature gain of 1.65 degrees.

“Areas covered by permafrost are warming up faster – on average, at twice the warming speed of the planet as a whole,” says Doctor of Geographical Sciences Oleg Anisimov, head of Climate Change Department at the Federal Hydrometeorology Service’s State Hydrological Institute. “At the same time, the upper layers of permafrost soils are getting warmer, too. In our country, in Central Yakutia, soil temperatures have risen by one to 1.5 degrees centigrade since the 1960s, and by up to one degree in Western Siberia.”

When temperatures rise even by so little, changes occur in the physical and mechanical properties of soils, which lead to a decreased load-bearing capacity of building foundations. In Yakutsk, a city in the Russian Far East, just 450 kilometres below the Arctic Circle and with a population of 210,000, over 300 buildings have sustained serious damages in the past thirty years owing to the sagging of the thawing ground. In just one decade between 1990 and 1999, the number of buildings in major cities in Russian Far North that became affected by damages due to their lopsidedly sinking foundations increased, relative to the previous decade, by 42 percent, 61 percent, and as much as 90 percent, in Norilsk, Yakutsk, and Amderma, respectively.

Problem of the century
For Russia, a thawing permafrost is one of the most perilous consequences of global warming. There is no other world dominion where 62 percent of territory would be taken up by frozen land.

Accordingly, no other country on the planet is as active in setting up in its cryolithozone such a broad range of bustling economic activities. Forty-six cities and towns with a combined population of over seven million are located north of the Russian Arctic Circle. The vast expanse of the Russian Arctic is home to the world’s largest metal works, ore and coal mines, mineral processing plants, nuclear test ranges, radioactive waste repositories, to name just a few industries. Nearly 93 percent of all global natural gas output is produced in these latitudes as well as 75 percent of oil, which, converted into values of economic potential, yields up to 70 percent of the country’s annual export trade. 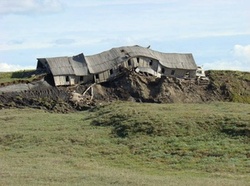 “In Western Siberia, according to statistical data available, around 35,000 equipment failures and accidents take place every year involving oil and gas pipelines,” the State Hydrological Institute’s Anisimov says. “If the current trend continues – and this is well indicated by theoretical climate prognoses – dangerous geo-ecological consequences of permafrost degradation will be unavoidable. Mass-scale deformation of buildings and structures that were built without consideration for climate warming will then become possible as a result.”

This is perhaps the worst natural calamity Russia has yet had to face.

All hope is lost… or is it?
Such dire predictions would seem to be, almost literally, cutting the ground from under more than a half of the country. Yet, as Anisimov points out, panic is not the way to go. Rather, the impending catastrophe could be averted if one starts preparing for it beforehand. Creating a geo-informational analysis system that could provide timely geo-cryological hazard forecasts could be a start.

“The thing is that destruction of permafrost will be an uneven process,” Anisimov explains. “With a high degree of likelihood, certain sites will be subjected to bigger risks than other sites. If we are to do this right, we need to understand where the primary maximum-risk areas are, which is where one will have to apply all the efforts needed.”

The St. Petersburg-based State Hydrological Institute is now putting the finishing touches to just this kind of geo-cryological risk information system. With its help, industries, building contractors, and civil engineers will be able to target specific vulnerabilities while working in a particular high-risk location.

“Geo-cryological prognostication allows one to assess beforehand the potential risk of emergency situations and to develop the most effective and cost-efficient design solutions,” Anisimov said. “Geo-cryological engineering has acquired a wide range of methods to stabilise foundations and base structures on permafrost soils. Such methods could be suggested as part of a comprehensive strategy for Russia to adapt its economy to the approaching climate change.”
“It’s not for nothing that in Alaska, for instance, they use thermo-siphons for oil trunk pipeline supports,” Anisimov added.

Russia’s future balancing on thin ice
It is, as it so often happens in Russia, a little more complicated than that. The geo-cryological information system developed at the State Hydrological Institute was, in effect, the product of not much beyond the bare enthusiasm of St. Petersburg scientists. Even though the project had been included into the research agenda of the Federal Meteorological Service, the jury is still out on whether the results will be in due demand in a country where two thirds of the entire territory rests on ice as thin as permafrost is starting to be in this changing climate.

That Russia absolutely needs a national strategy to adjust its economy to the consequences of permafrost melt has been the subject of many ongoing discussions. As for those developed countries where this issue – just like in Russia – is of immediate priority, they have long stepped up their research into the problem.

In March 2009, fanfares kicked off the inauguration of Russia’s longest railway bridge, which spanned the Yuribei River on the Northwest Siberian peninsula of Yamal. The longest-bridge record aside, the four-kilometre structure is also unique for being the longest bridge built on permafrost. It is a section of a major transport route leading to Bovanenkovo oil and gas condensate field and was built to last until at least 2050, but started to crumble only six months later – all because project designers had never quite taken into account the thawing permafrost beneath the bridge’s foundations.

It is only with one particular factor in place that one might expect the long-awaited wake-up call to sound for project developers, contract builders, oil and gas production companies, or any other kind of businesses that place their bets on the growing economic activities in Russia’s North – not to mention the authorities of various levels – and it is a national climate-change adaptation strategy. If Russia fails to adopt such a policy, it can well expect its economy to start sinking soon… right into the murky mire of thawing permafrost.