Today, Bellona will officially present its “101 solutions” to the climate crisis, in which it spells out that the possibilities and the solutions to climate change are already here, and that there is no basis for climate negotiators to not agree on an ambitious climate agreement when they meet in Copenhagen next week beginning on December 7th. 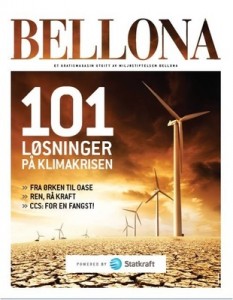 The Bellona Foundation believes that the UN’s COP15 Climate Summit in Copenhagen, which will continue through December 18th, are an extremely important and unique opportunity for the foundation to influence key decision makers and to create an atmosphere of optimism by providing solutions to the problems the world’s climate is facing. The climate talks are located in Bellona’s neighbourhood, as it were, and Bellona has been employing the majority of its resources throughout the fall in preparation for this historic conference.

Bellona’s “101 solutions” range from technological and political approaches to more everyday solutions. Among these are electric cars, algae cultivation, CO2 capture and storage (CCS), osmotic power plants, super-thin solar cells – and political courage. The common thread running through all presented solutions is that they already exist, and that when used in concert, they provide radical reductions in CO2 emissions, and should be adopted as soon as possible.

“Bellona presents its ‘101 Solutions’ to show that the solutions to the biggest challenges of our time already exist – they must only be implemented into use,” said Bellona President Frederic Hauge. “This knowledge should make it impossible for the world’s climate negotiators to not come to a good and ambitious climate agreement,” he said.

‘101 Solutions’ Magazine, web and interactive touch screen data board
“101 Solutions” will be published as a magazine and by means of an interactive touch screen  that will be presented to the world at Copenhagen’s main square, Rådhusplassen. Visitors to “101 solutions”touch screen table will be able to see how the various technological and policy solutions depend on each other – allowing visitor to engage in coming up with their own solutions to the world climate crisis.

The magazine version of “101 Solutions” will be published in Norwegian and English. The Norwegian version will be rolling its first issue off the presses today and will be distributed for free throughout Norway through Rema 1000, Norway’s premier supermarket chain, will be printed the “Insight” section of Norway’s biggest daily newspaper, Aftenposten, and will be available at many universities and colleges, as well as through Bellona’s partner companies.

It will also be distributed in English on SAS Scandinavian Airlines through the entire period of the climate talks. In addition, the English editio will be available during the summit at both Rådhusplassen and the Bella Centre where the climate talks will be taking place.

The Solutions can also be found at the “101 Magazine” site, www.101-solutions.org.

Bellona in Copenhagen
Bellona will have a comprehensive programme of 40 to 50 side events, seminars and meetings with its international NGO and business partners at the Bella Centre during the two weeks the UN climate summit is in session. The topics will range from daily updates and analysis of the negotiations to the various solutions needed to tackle global warming.

Bellona also plans to host a UNFCCC Side Event on Carbon Negative Solutions. In addition, Bellona expects to have an NGO booth in the NGO section of the Bella Center.

Bellona is an official partner of the UN and Copenhagen Municipality event called HopehagenLIVE – the climate summit’s window to the world. As the only environmental organisation taking part in this, Bellona will, powered by Statkraft, host a pavilion in the future city of HopehagenLIVE. The pavilion will represent the future city’s science centre.