Published on September 21, 2009 by Charles Digges 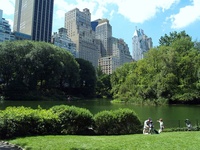 The head of the European Union’s executive plans to challenge developing nations to commit to greenhouse gas emissions curbs to get financial support from industrial nations, he told reporters.

Bellona observers, including its president, Frederic Hauge will be on hand to participate in talks, and Hauge offered a more sanguine point of view than others from Europe.

“The environmental movement has become one of America’s biggest allies,” he said.

“Under the administration of George W. Bush, oil was the most important alliance,” said Hauge on his first trip to the United States since President Barack Obama took office.

“Now the environment and renewable energy have become the most important alliances,” he said.

The Norwegian delegation’s stops will not only include the UN climate talks, but also UN Secretary General Ban Moon’s address to the General Assembly. From there they will travel  Los Angeles where they will meet with California Governor and climate change pioneer Arnold hering the , who is gathering governors and regional leaders from the United States, China, Brazil, India, Canada and the EU.

“We wish to contribute to the transatlantic dialogue,” said Hauge.

“These meetings are important opportunities to meet people in the various delegations.”

This may be tougher than thought.

The growing rift between the United States and the European Union is tossing cold water on hopes that a breakthrough will come during the New York talks that will lead to a global climate agreement in Copenhagen in December.

Obama, who will address a number of the New York conferences, one  of which will be held at the Clinton Global Initiative – where Bellona will participate – and another  scheduled at the Council on Foreign Relations, has pledged to take a leadership role in the climate talks. But the President is struggling to gain traction with Congress who has yet to vote on climate proposals that went before the Senate this summer.

But these figures are weighing in too low to satisfy EU negotiators, who pride themselves on taking the lead in the battle against climate change, with member states agreeing to make 20 percent cuts in CO2 emissions by 2020 from 1990 levels.

EU leaders are seeking a more ambitious global goal for Copenhagen and are ready to commit to 30 percent cuts if the rest of the world does likewise to attain the overall goal of restricting global warming to two degrees Celsius.

UN negotiations are tasked with delivering a treaty in Copenhagen to curb the emissions that feed global warming and help developing nations cope with drought, flood and rising sea levels.

"We are worried because the sum up of the initiatives taken so far is not enough to meet the two degree target," said Swedish Prime Minister Fredrik Reinfeldt said last week, as quoted by Reuters.

Most EU leaders are pointing to an erosion in relations between the United States and Europe, who began climate talks as allies. In Brussels, EU official are saying they have grown increasingly irritated by the US stance, saying it is falling short in its ambition to reduce emissions and offering aid to developing nations.

But EU officials and newspapers are reporting that, despite these modest changes under the Obama administration, the EU and US relations are nearing breakdown.

Connie Hedegaard, the Danish environment minister, lowered expectations, by telling the Financial Times that, “Things are looking difficult and too slow, that is the fact.”

A European Commission official also told the paper that, “So far, we thought the basic problem was the Chinese and the Indians. But now I think the problem appears to lie most clearly with the US,” adding the talks were “not going well.”

Much of the frustration on international climate talks is stemming from the fact that the Obama administration is embattled in domestic issues, primarily the debate over healthcare.

Prompted by remarks last week by Harry Reid, the US Senate majority leader, that cap and trade legislation might be pushed back to next year, John Bruton, the EU ambassador to the US, blamed the Senate for holding up the global agenda.

“There is a global timetable and the US Senate is fully aware of it . . . The world cannot wait on the Senate’s timetable,” he said in remarks to the Financial Times.

As pointed out numerous times by Bellona’s Jonathan Temple, who is the director of Bellona USA, Europe often fails to understand the US political process, which requires that the administration have an unequivocal go-ahead from Congress before concluding international agreements.

Todd Stern, US envoy for climate change, told reporters that, “It may be that some people on the other side of the pond don’t understand the system that well, but that’s the way . . . (it) works, and we’re pushing ahead.”

While heath care for millions of uninsured Americans take, and soaring unemployment take centre stage in this first month after Congress’s August recess, it is unlikely that climate change will be high on Washington’s agenda.

US figures point out that its targets on emissions cuts require a similar level of effort as those of the EU, and that the cap-and-trade bill under consideration in Congress would provide financing comparable to that from Europe.

But the quarrel has prompted fears that governments will try to save face at Copenhagen by agreeing to a watered down deal or a “political declaration” rather than an outright agreement.

Two major UK climate figures have said that a 1-year-moratorium on the climate talks may be preferable to risking a weak deal in Copenhagen this year.

David King, former scientific advisor to the UK government told the Financial Times that, ““I would rather see a 12-month moratorium on the agreement so that you can have a better agreement, with President Obama freed up from the Congress and Senate processes.”

King’s positon was echoed by Lord Nicholas Stern, the author of the landmark study of the impact of climate change on world economics, who said,  “I would much prefer a framework that had to be filled in (next year) than something agreed with weak targets that would be difficult to unravel.”