Published on September 13, 2009 by Charles Digges 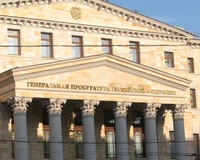 Two activists, Vladimir Slivyak, who co-chairs Ecodefence, and the group’s nuclear physicist, Andrei Ozharovsky, were plucked from the crowd and detained by police at a local precinct, who gave them no reason for their detention, for four hours.

“They simply held us until almost the end of the (public) hearings and left us go,” Slivyak told Bellona Web.

Materials the two were carrying with them regarding nuclear energy were taken from them during their stay with the police, and after the rally was over, they were released and their literature returned.

The rally was in protest of ecological groups, other NGOs and other members of the public not being able to participate in open hearings on the construction of a nuclear power plant in the Nizhny Novgorod region, some 600 kilometres Northeast of Moscow.

“We were hit with a situation where ecologists, who hold an alternative point of view on the presentation of the (Nizhny Novgorod Nuclear Power plant) project, were not allowed into a public hearing,” said ERC Bellona Director Nikolai Rybakov.

“In our point of view, this is an extremely arbitrary act on the part of the authorities that we cannot leave unchecked, and therefore we sent a complain to the Prosecutor General,” he said.

The new nuclear power plant is planned to be built in the town of Murom, and some 2,000 people attended against its construction.

Aside from representatives of Ecodefence, members of other environmental organisations – as well as members of the general public – were also turned away. The police had formed a well fortified barrier around the building were the hearings were to take place, and Ecodefence members reported that they were not even allowed to cross the first cordon of police.

Local residents who turned out to oppose the plant at the open hearings, as well as representatives of Russia’s Ecodefence environmental organisation, were not able to pass through even the first police cordon. City officials from the town of Murom – which is 30 kilometres from the building site – were also turned away.

The single activist who managed to get into the hearings was Askhat Kayumov, director of the Dront environmental organisation.

Prior to the beginning of the public hearings, an announcement was distributed among the media saying that fortified security measures surrounding the even would be in place.

“In order to avoid unsanctioned breaches” into the building were the open hearing were being held, metal barriers had been erected, and some180 police were guarding the hearings themselves, said the announcement.

The Nizhny Novgorod Nuclear Power Plant is included in the  Russian government’s “General Scheme for the Construction of Electric Energy Installations Until 2020,” but is currently only at the review stage.

It is assumed that the first state of the nuclear station will consist of two reactor blocks. Each reactor will supply 1170 megawatts of power. The first is scheduled to come online in 2017, but a site for the plant has still not been chosen. Two are under consideration – the city of Uren, which is in the north part of the Region, or Monakovo, in the Navash district near Murom.

Local residents say that Murom will not get any dividends from the proposed plant. To the contrary, the see their potential neighbour as threatening them with radioactive waste that will come with standard operations, nuclear waste recovery, and the loss of the area’s status as a clean and attractive tourist region.