MOSCOW – Lawyers from all over Russia were gathered for the first time at a seminar about environmental law this Friday in Moscow. Lawyer Nina Popravko of the Environmental Rights Centre (ERC) Bellona said more cooperation is crucial at a time when Russian environmental rights have been severely weakened.

ERC Bellona, Bellona’s St. Petersburg office, hosted the seminar, which was held in the outskirts of Moscow, and gathered around 35 lawyers and environmentalists working with legal environmental issues.

Today’s situation in Russia holds many challenges for environmental lawyers: The environmental legislation has become increasingly weaker since the 90’s, rights are diminishing, supervision schemes are not working, and corruption is widespread.

Growing stronger
Popravko said that it was difficult to gather so many lawyers from  so many corners of such a large country, but that it was of great importance to do so.

“We have many common challenges, and need to know more about each other’s legal work. The most important thing about the seminar is that we are building a network for those who work with environmental law,” she said.

“We will support each other, share legal documents and update each other on key issues. So far, many lawyers have worked on important environmental issues locally or regionally, without other environmental lawyers in other parts of the country knowing about it. Now we are getting a network, and we grow stronger.” 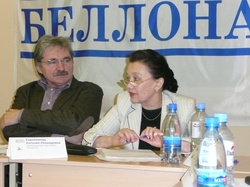 One case on which Popravko is currently working concerns an oil pipeline running straight through St. Petersburg.

“By using the legislative system I am trying to get hold of a governmental impact study that supposedly exists. I have not been having much luck so far,” she said.

Popravko sai that the law used to require impact studies to be completed by independent experts and not by the authorities alone, as the case is today.

The lawyers also discussed how supervision schemes for environmental control do not work. Industrial players who are being checked are told about the “secret” inspections in advance so that they can make the necessary adjustments to present themselves as cleaner and better the day they are to be visited by inspectors.

This development is underscored by the fact that the environmental committee of the Russian parliament recently was closed down.

“The courts depend on the capital, the ones who have the money. The strong ones almost always win,” she said.

The weakening and shrinking of Russia’s environmental legislation coincides with Russia’s recent economic growth. The government has adjusted for businesses, the rich and powerful – at the expense of ordinary people and the environment.

Lawyers will continue to fight
In spite of the enormous difficulties, Bellona has great faith in restoring Russian environmental legislation to preserve nature and people’s health.

“For instance we are working to make the Supreme Court see to a better use of terms. Today there is a wide variety of definitions on central environmental terms and a dissimilar legal practice to go with it,” said Popravko, and added:

“Now we should meet Russian legislators together, and propose concrete suggestions for change and do everything to make the situation better.”

The conference was unprecedented in gathering such more than 100 Russian environmental organizations, and was of great importance to strengthening the country’s environmental work.