ST. PETERSBURG – Immigration authorities in Northwest Russia detained foreign participants in a protest camp against a Russian-European gas pipeline that was arranged by the Murmansk-based Nature and Youth environmental organisation for six hours, the group reported on its website.

Published on August 7, 2008 by Charles Digges 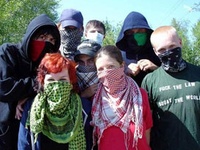 The visit and threats by immigration authorities, who enforce visa conditions in Russia, have become more or less routine since environmental protest camps began to spring up on an annual basis across the country.

“The measures to drive environmentalism from Russia are becoming steadily more complicated, and many foreign organisations are very unpopular with Russian authorities,” said Kristin Jørgensen, a senior advisor with Bellona’s Russia department.

The camps regularly draw the participation of foreign activists and journalists, who are often harassed with threats of arrest, deportation and in some cases espionage – though no foreigners have yet been charged with anything.

But amendments to Russia’s NGO laws that took effect in January 2006 have slashed the number of civil society organisations operating in the country by an estimated 150,000. And last month, Prime Minister Vladimir Putin announced that only 12 foreign organisations, of a previous 101, would be allowed to continue work in Russia without having their grants taxed.

Organisations that were hit by this announcement include the International Red Cross and the World Wildlife Fund.

Shtokman a sacred cow for the Kremlin
The Shtokman project is becoming ever more environmentally dicey a proposition as Moscow ignores local protests, and the government has announced it will enlist nuclear energy in powering the field’s development.

This year’s Nature and Youth protest camp situated near the town of Apatity in the Khibin district, which the Russian government intends to cross with a gas pipeline from the Shtokman oil and gas condensate field in the Arctic White Sea, was convened on August 1st with the demand that the Khibins be declared a national park. The camp broke on Thursday.

Interrogators focus on foreigners
At about 10:00 pm local time on Wednesday, Nature and Youth said that officers with the federal immigration service descended on the camp, and separated out the 14 Norwegian and Finnish participants. Foreign participation was represented by seven young women from Norway’s Natur og Ungdom, or Nature and Youth, organisation and seven activists from Finland’s Finnish League of Nature.

“That Russian authorities interrogate foreign idealists throughout the night is not your usual daily fare, even in Russia. This can’t have been an especially comfortable experience,” said Jørgensen

Immigration Service officials spent the next six hours conducting interrogations and filling out reports, releasing the foreign participants at about 5:30 am Thursday.

All 14 were found to have violated conditions of their stay in Russia, and were handed fines of 2,000 roubles (about $97) that they had to pay before leaving the country Thursday. The seven Norwegian women from Natur og Ungdom left on a bus Thursday for Kirkeness, Norway.

Wednesday’s ‘simple’ protest
On Wednesday, the participants in the camp had led a protest against the Teriberka-Volkhov gas pipeline, which the Shtokman Development company – comprised of Russian gas giant Gazprom, Norway’s StatoilHydro and France’s Total – intends to lay across the Khibin mountains. 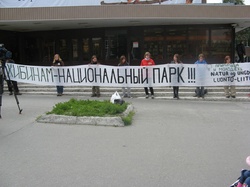 Camp participants bore banners in Russian and English during the protest reading “Make Khibin a National Park,” “No Pipeline in Khibin,” and carried other handwritten signs.

“Industry and uncontrolled tourism destroy the Khibin Mountains every day,” said Nature and Youth chairman Vitaly Servetnik during the protest.

“We demand that this be stopped and that the Khibin area be given the status of a national park with the immediate reserving of the territory, and that the Teriberka-Volkhiov pipeline be continued along the western bank of Lake Imandra because local ecosystems there have already been destroyed,” he said.

Activists also passed a formal appeal to the city administration of Apatity to be forwarded to the Shtokman Development company.

“The Khibins possess a high value of natural heritage for the recreation and heath of the population, the support of balance in the environment, and also for the further development of tourism and other stable developments for the territory, such as investment,” said the appeal.

Police sanction no defense against midnight raid
Despite the fact that the protest had been sanctioned by local authorities, several activists, among them the Norwegians and Finns, were detained by immigration authorities during the daytime protest. They were let go three hours later, and officials said they had done nothing wrong.

After the protest, however, Andrei Rybalko, chief of the local immigration service in Apatity, phoned camp participants to say that the matter was not closed, and that he would be dispatching his officers to the camp later Wednesday evening.

Solveig Firing Lunde, one of the young Norwegian women who took part in the environmental camp, and was interrogated by Russian officials, said that the group had received permission to hold the protest.

“We had a simple protest that the Russian authorities knew about in advance,” said Firing Lunde in comments to Aftenposten, the Norwegian daily.

“We have never been stopped before when we had participated in similar protests.”

Servetnik vowed to take up the interrogations of his foreign colleagues in a legal complaint.

“This incident clearly shows that decisions are taken on the basis of phone calls from the bosses, and are changed with enviable speed,” said Servetnik.

“We consider the actions of the immigration service officials to be illegal and will file a complaint about their decision.”