ST. PETERSBURG – A meeting on Wednesday at the Russian Ministry of Economic development on the future of a protected tourist zone and national park in the Russian enclave of Kaliningrad overshot its mark when government officials left behind notions of protecting the area and forwarding vast plans for large scale development. 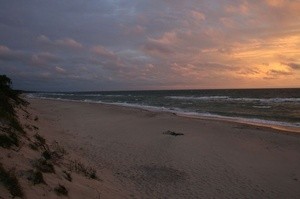 At issue is the development of several so-called special tourist and recreational zones in the Zelenograd region of Baltic Sea Russian enclave of Kaliningrad. The construction is slated to take place on the Curonian Spit, a protected nature preserve that is included on UNESCO’s list of World Heritage Sites.

Representatives from Economic Development Ministry, the Ministry of Natural Resources, the government of the Kaliningrad Region, as well as representatives from the Federal Agency for the Management of Special Economical Zones attended the meeting, the results of which harshly disappointed environmentalists.

According to information obtained by Bellona Web, the project for special tourist and recreational zones in the Curonian Spit territory had already been tabled at the beginning of last year. The project calls for construction of several high rise hotels, other tourist residences, gas pipelines and additional electrical lines on specially protected territories and lands – with a 1 million person boost in population in the national park to boot.

A project of such scale would place an intolerable burden on the environment of the protected territory and ruin the entire point of calling it nationally protected land.

But illegal construction on the territory of the World Heritage Site – a narrow spit of virgin land 400 metres wide at its narrowest and nearly 4 kilometres across at its widest – has already begun, at least at the edges of small villages and settlements.

Current plans for the specially protected zone include the development of four plots on the shoal outside of existing villages, two of which are considered by scientists to be the most vulnerable spots on the shoal.

The Ministry’s fluctuating opinion
A mere three weeks ago on March 5th, Natural Resources Minister Yury Turentev announced to a gathering at the Curonian Spit that the construction of tourist resorts would proceed cautiously and with consultations of public opinion such that the environmental impact would be minimal.

“I think that this posed more than a few issues for science. Because it is not our attention to command ‘build there’ or ‘build here’ or ‘build along, or ‘build across’” Turentev said then.

“We come forth with the premise that there are specialists that must decide this. Thus a group of experts needs to be convened. It must be defined where tourist and recreational zones should be developed, how they should be developed such that they cause no harm, but to the contrary allow for the preservation of the park.”

Turentev’s words, however, have not stopped his ministry, along with other participants of Wednesday’s meeting, from deciding to “build along and across” without any public consultations or environmental impact studies at all.

According to the transcripts of the meeting, scattered plots for tourist and recreational areas have been specified without – and even despite – scientists’ recommendations and have laid out extremely constrictive deadlines for involved bureaucrats. For instance, the Kaliningrad region is to have produced signed agreements on the specific boundaries for the tourist and recreational zones in the national park no later that April 17th.

The meeting’s participants have formulated this task as such: “The Russian Natural Resources Ministry will, by the deadline of April 17th 2008, have confirmed changes and additions in the decree on the status of the Curonian Spit national park, including a scheme of functional zoning for the national park with regard to the creation of tourist recreational areas.”

The decision noted in the transcripts of Wednesday’s meeting, Bellona Web was told by an involved official, has still not been signed and looks slap-dash and unfounded.

Decisions on the tourist and recreational zones must be taken by experts who have studied the Curonian Spit, as well as by representatives of the public and the national park itself. These experts must conduct detailed studies of just how the park would be effected by this development.

Open and comprehensive discussions of the development plans on the Curonian Spit’s vulnerable territory are necessary as the area has already been subject to social expansion and suffered ecological catastrophes of a local scale.

What is not required is a backstage allocation of real estate plots that don’t differ at all from the illegal practices of unlawful development on the Curonian Spit ushered in at the end of the 90s, but the presentation for discussion of rigorous engineering documentation, including environmental evaluations as well as state environmental impact studies of the proposal.

These include a land plot of 35 hectares situated at the root of the shoal in the now dried out channel, which is one of the lowest lying areas on the shoal where there are potent layers of peat. From a geological point of view, those points on the shoal that are the sites of ancient channels are the most unstable. Scientists say these are the most vulnerable areas for erosion and penetration of the shoal by the sea from one side and the bay from the other – even without any of the planned tourist and recreational sites.

Other plots singled out by the meeting are a160 hectare spot adjacent to the village of Rybachy, some 30 kilometres from the previous channel plot. This territory’s boundaries are almost entirely overlapped by the national park’s natural meadow network, which are a feeding ground for the Curonian Spit’s animal population, as well as the site where a particular strain of meadow orchids grow. This particular lowland is abutted by a large lake and a series of small ones.

The land development that will precede the construction will upset the hydrological balance and put one of the richest arrays of water areas and wetlands and the animals that thrive there, such as swans, herons, ducks and beavers, in jeopardy.

Another land plot slated for development is a 20 hectare plot on the banks of the Baltic Sea some 5 kilometres from the Lithuanian border. The narrow plot, extending along a highway, which is dotted with small bands of birch groves. Some two kilometers from here, the protected nature zone of the national park begins. The planned tourist and recreational zones encroach on the buffer zone surrounding the nature preserve.

The Natural Resources Ministry meeting also sectioned off a 100 hectare land plot adjacent to the village of Morskoye. This plot of was characterised by scientists at the meeting as being the least suitable for development. Beneath a layer of sand lies an unstable stratum of peat and moss. Any development of this area, including removing even small plants and trees from this dune will lead to dispersion and erosion of the sand. This territory is host to hilltop birches that have saved the Curonian Spit from erosion altogether – which was on of the chief reasons for its inclusion in the UNECSO World Heritage Site list.