Norwegian oil giant StatoilHydro has acquired a 24 percent share in the company being created by Russia’s Gazprom to drill the Shtokman field in the Barents Sea in what Bellona calls a sad day for the Barents Sea environment.

Published on October 29, 2007 by Charles Digges

“Statoil is rejoicing, calling it the day of its entrance into the project a happy day for the Braent’s Sea,” said Bellona President Frederic Hauge.

“It’s a sad day for the Barents Sea. The Arctic and Barents Sea ecosystem is experiencing a colossal load, which will only increase with the development of the Shtokman field.”

The agreement for Statoil to participate in the Shtokman drilling was signed Thursday by Gazprom chief Alexei Miller and Statoil President Helge Lund. Gazprom will maintain 51 percent of the company developing the Shtokman field. Another 25 percent was passed to France’s Total in June. The United States’ ConocoPhillips, which was also striving for a piece of the Shtokman pie, received nothing.

Rights to drill the enormous reserve off the Arctic Coast of Russia have been hotly contested and Russia has lorded the opportunity to participate over western oil majors like the crown jewels, and western interest has been inflamed. Gazprom, Russia’s super-giant state oil and gas conglomerate, has a stakes in everything from banks to national media. The company has served to fan those western flames with vague promises and winks and nudges to its European counterparts that it is willing to share part of the prize beneath the Arctic seabed. 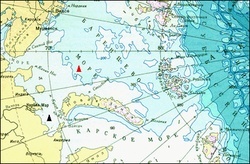 But for all of its consolidated might, Gazprom knows very well that Russia does not posses the necessary technology to tap the enormous ice and water covered reserve and has courted the assistance of Norwegian experience with harsh-climate drilling. Western companies have repeatedly justified their interest in claiming a stake in the environmentally devastating enterprise of developing the Shtokman field by saying western influence will hold Russia to higher standards.

Presuming that Gazprom – often referred to as Russia’s state within a state – will alter any of its practices to be environmentally friendly, however, is naïve.

“Unfortunately, Gazprom’s choice of the Norwegian Statoil firm to participate in the development of the Shtokman field with a 24 percent share yields absolutely no guarantees that safe technologies and high ecological standards will be adopted – standards Statoil employs in its own work,” said Bellona-Murmansk’s energy project coordinator Nina Lesikhina.

“The last word about approaches to opening the field will be Gazprom’s, and our state gas and oil industry is not at all distinguished by an ecological business orientation – in any case the load on the sensitive Arctic ecosystem will increase.”

“Norwegian participation in the Shtokman field does not guarantee higher environmental standards,” said Jørgensen. “Gazprom has a 51 percent share and will be the big brother in the cooperation. Russian laws and regulations will be the deciding factor for development, not Norwegian ones.”

According to the latest data, The Shtokman reserves are estimated to be 3.7 trillion cubic meters of gas and more than 30 million tons of gas condensate, making it one of the biggest fields in the world.

It is also one of the least accommodation fields for development, with its distance from the mainland, its depth underwater, its harsh weather, the complicated undersea terrain under which it lies, and the high probability of the spread of gas hydrates into natural formations on the sea floor. Environmentalists are also concerned by the lack of sufficient observations of and information about the meteorological conditions in the zone and the lack of experience anyone has in working in such trying conditions.

Russian oil and gas industry swindles
The past experiences of other European oil majors working with Russia should give Statoil at least some hint of what it is getting into.

In recent years, Royal Dutch Shell, wooed by Russian promises to reap 70 to 90 percent of the oil bonanza to flow from the far eastern Sakhalin fields, found itself in violation of a little used and selectively applied Russian environmental law. As a result, as soon as the Russians had gleaned the know-how they needed from the western firm, Royal Dutch Shell had to content itself with less than 30 percent of the projected profit.

It was an emblematic Russian oil industry swindle, and one that was not limited to Royal Dutch Shell. But the promise of big money in the untapped Arctic Russian oil reserves has far outweighed more reasonable considerations – both from a business and environmental perspective – that western oil giants should be weighing.

There are other large risks tied to investing in Russia, which the case of Telenor, the Norwegian telecommunications company, bears witness to. The Kremlin has shrewdly employed Gazprom to actively buy up politically bothersome institutions as well as in the re-nationalisation of industry and land. Energy and politics go hand in hand in Russia.

Jørgensen says that big oil and gas in Russia are rife with corruption, and says that any number of challenges stand in Statoil’s way.

“Shell, Total and Hydro have had conflicts with Russian authorities over oil fields in Russian and these conflicts have not been resolved in favor of the western businesses,” she said.
Gazprom’s modus operandi has so far proven to be obtaining the technical know how of its western partners as quickly as possible – as witness the experience of Royal Dutch Shell – and then cutting out its partners as expeditiously and quietly as possible.

Public in the dark
Bellona-Murmansk representatives have attended all public hearings regarding possible effects to the environment that could result of the Shtokman field development, which took place at the end of 2006. Yet these hearings proved ineffective in either educating the people or causing the industry to take environmental concerns into consideration.

As it stands developing the Shtokman field will account for some 4,4 billion tons of carbon dioxide emissions, which is one sixth of the global annual carbon dioxide output.

Not that Statoil or any other western firm coming north to Shtokman would be required to know this, or act in accordance with what the local population considers to be in its own best interests. Russian legislation has conveniently obliterated that concern.

“The population has little possibility to influence the decision-making process and little insight into the deals the industry concludes. And after mandatory public hearings on development projects were jettisoned out of Russian law, the population has no possibility for insight of influence on resolutions of the oil and gas industry.”

This assertion, notes Jørgensen, is based on observations of Gazprom’s public hearing process by Bellona-Murmansk such as it was carried out in the region.

Bellona’s position therefore is that:
While the gas pipelines are being constructed, it is necessary that public information about and access to construction be guaranteed in order to assure public control of the project;

The construction of gas pipelines through waterways via open-cutting methods could lead to destruction of the ecosystem of these water bodies and bring irreparable damage to marine resources in the area. It is therefore necessary that pipelines cross waterways over bridges in the fish-rich waterways of the Murmansk region.

It is necessary to consider the nearness of the gas pipelines to dangerous industrial installations, such as the Kola Nuclear Power Plant and mining enterprises, to assess environmental risks and alter the route of the pipelines when necessary.

The question before Statoil, then, is twofold: will it persist in thinking it can apply its experience in an environmentally sound way in the Shtokman field, while risking an enormous Gazprom orchestrated bamboozle that will make it a mere footman to Russia’s wishes; or will it chose the environmental and business high-ground by refusing to engage in the process at all.

The answer Statoil gives will be a clue as to just how different the western oil industry and the Russian oil industry’s goals and tactics really are.

The Barents Sea and Arctic ecosystems are already experiencing a huge environmental load that will only be made heavier by the development of he Shtokman field.