ST. PETERSBURG – Prominent environmental activist and sociologist Olga Tsipilova was one of several hundred people beaten and detained by police during one of the largest opposition marches against the administration of Vladimir Putin held in St. Petersburg in several years.

Published on April 16, 2007 by Rashid Alimov, translated by Charles Digges 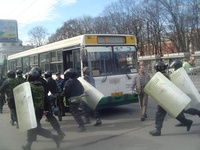 According to organizers, some 4,000 people turned out for Sunday’s pro-democracy “March of Objectors” protest on St. Petersburg’s central Pioneer Square to voice their dissent for authoritarian roll-backs under Putin. It was part of a larger protest that also took place in Moscow and Nizhny Novgorod.

The protest drew anti-Putin political organisations of all stripes and leanings, among them members of St. Petersburg’s Yabloko party; The Citizens Front Association; The Russian People’s Democractic Union; the Nationalist-Bolshevik organisation; the Red Youth Avant-Guard; The Russian Workers’ Party, as well as Stop the Draft, Memorial, We Defend Vasilievsky Island, and the Investors Movement.

The first attempt to carry out the March of Objectors in St. Petersburg occurred on March 3rd. Some 7,000 people turned out to express their dissatisfaction with the present presential aministration for a variety of reasons from authoritarian crackdwons on civil society, to ongoing involuntary conscription to changes in real estate law . The demonstration succeeded in breaking through a barricade of riot police and pouring out onto Nevsky Prospect, St. Petersburg’s main thoroughfare. 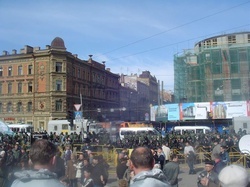