Duma looks to do away with environmental impact assessments

Published on October 26, 2006 by Vera Ponomareva, translated by Charles Digges 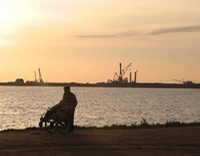 Environmentalists say that the Duma’s initiative is a “threat to national security.”

If environmental impact assessments are scrapped, it will mean that the Russian public has no stake in deciding whether or not potentially environmentally dangerous projects taking place in their backyards are something they agree with.

Environmental impact studies consist of several procedures, including how a given project will effect the surrounding environment. Such studies are paid for by investors in a prospective project, and provided more basis by independent studies commissioned by the state. The assessment, under current legislation, is then reviewed in public hearings.

The public is also given the right by the current law to conduct socio-ecological assessments, which are also included in the final environmental impact studies.

But all of these are in danger of going out the window at a time that the Russian government is slowly hacking away at the rights of its citizenry.

The new bill comes at a time when Russia is trying to reign in the influence of foreign non-profit human rights organisations within the country – with similar consequences likely for environmental organisations. Several prominent rights and humanitarian aid groups have already been told they have to re-file their applications with authorities before they are allowed to continue work – further evidence of Russian President Vladimir Putin’s “power vertical” at work.

It also next to invalidates the pledge Putin gave upon taking office to fight Russia’s corruption, rampant in the context of a growing synergy of state and regional authorities and business heavyweights: The few showcase anti-corruption trials, indiscriminate city construction and oil pipe line expansions, and recent environmental violations charges against the Royal Dutch Shell have shown that authorities only deal with environmental risks when they can benefit from it politically or financially.

Under the proposed bill, any construction work – including nuclear plants, metallurgical factories or oil pipelines – can be executed without a preliminary assessment regarding environmental safety. In addition, the bill proposes to outlaw environmental, health and safety, and fire oversight during construction, reconstruction and repair of such facilities.

“The contents of the first reading run somewhat counter to the application of international agreements signed by Russia, in particular the ‘Convention on Assessing Environmental Impact in Transborder Contexts,’” Pavel Kotov, deputy head of the Russian Natural Resources Supervision Agency for State Environmental Impact Assessment said in a telephone interview with Bellona Web. He said the bill could change substantially by its second reading.

An explanatory note to the bill says that it “aims at removing administrative barriers with the goal of increasing volumes of housing construction, and also at improving mechanisms for bringing land plots into economic circulation for housing construction.”

Yet the bill introduces changes to a significant number of federal laws, including the laws on environmental impact assessment, conservation, and other laws that clearly bear no relation to housing construction.

In addition to getting rid of state environmental impact assessments, the bill also does away with civil hearings – in other words, it deprives people of the right to reliable information on the state of the environment.

“At present, the state environmental expert assessment is virtually the only institution of preventative control over economic activity,” she said. “And now they want to take all the others away.”

Prominent Russian environmentalist and president of the group Ekozashchita! Vladimir Slivyak said: “Environmental impact assessment must not be scrapped… it is an essential norm and procedure, and moreover, justified, necessary, and in demand.”

“The law on environmental impact assessment is our only hope, our only means of stopping dangerous projects,” Yablokov told Bellona Web.

Bellona Web has not been able to reach any of the backers of bill 317064-4 – as it is known in the Duma’s bureaucratic parlance – for comment. The bill’s sponsors are Kremlin-friendly United Russia legislators Martin Shakkum, Viktor Yeltsov, Alexander Khinshtein, Vyacheslav Shport, Pyotr Kamshilov, Dmitry Sablin, Viktor Pleskachevsky and Yevgeny Bogomolny.

The text of the bill was removed for unknown reasons from the State Duma website a few days ago, but is available on Bellona’s Russian web pages at Bellona.Ru.

Expert opinion
Greenpeace presented last Friday the results of a private study of state-wide environmental risks to be inferred if the bill is passed. The Greenpeace commission experts said the bill creates a real threat to the country’s national security and to the health of Russian citizens. They concluded that the bill is conceptually unacceptable and should be scrapped.

“State environmental impact assessments are the only legally established mechanism guaranteed by statutory norms to implement citizens’ rights to a wholesome environment and trustworthy information on its condition,” said Tamara Zlotnikova, head of the expert commission that carried out the impact study for Greenpeace.

“[The bill] contravenes Russia’s Constitution and international legislation, and denies our citizens the right to participate in environmentally significant decision-making.”

The bill proposes to replace state environmental impact assessments with an expert assessment of project documentation, as stipulated under the Urban Building Code, which would evaluate the documentation’s compatibility with the demands of technical regulations.

“The problem basically is that at present we do not have one technical regulation that lists environmental requirements,” said Irina Nevrova, the commission’s secretary, and a lawyer for Greenpeace.

“Moreover, no [such regulations] will be adopted before 2008-2010. In this situation, replacing the state environmental impact assessment, as proposed by the deputies, amounts to abolishing it.”