A high-seas cat and mouse game was played out in the Arctic waters of the Barents Sea near Northern Norway on Monday after a Russian trawler resisted a Norwegian Coast Guard arrest order and fled with two Norwegian inspectors who had come on board to inspect it.

Published on October 18, 2005 by Charles Digges 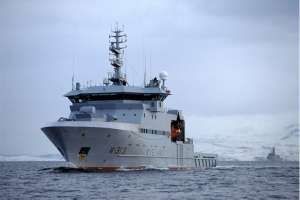 
The incident could result in a diplomatic spat between the two countries, and set the already precarious balance of what country is considered to have fishing rights in the disputed arctic waters off kilter.


The Russian trawler Elektron had been stopped and boarded by the Norwegian Coast Guard on Saturday morning in the Svalbard Archipelago in the Barents Sea, near the border of an area where fishing rights are between Russia and Norway are disputed. Norway has in the past claimed that it has full sovereignty over these waters. Russia has claimed the opposite.


The Norwegian Coast Guard had declared the Russian trawler formally under arrest, and the trawler initially accepted the arrest order, according to Steve Olsen, squadron chief for the Coast Guard’s northern division of Kystvakt Nord.


Another spokesman for the Norwegian Coast Guard said that, initially, the Elektron appeared to be following orders from Norwegian authorities to sail to Tromsø when it began to take an erratic course changes. Then, while nearing Tromsø, the trawler suddenly changed course on Sunday and headed for Russian waters. .


The trawler’s crew claims it had been told by its owners not to follow the Norwegian orders, Aftenposten reported.

The Elektron is well known to Norwegian authorities, which have placed it under arrest before for fishing Norwegian waters. And last May, it was stopped for the illegally tranferring of fish from the Barents Sea from its own hold to a fishing boat from Cambodia.


The Norwegian inspectors that had boarded the Elektron had uncovered several illegalities, including the illegal use of nets and hauling in undersized fish.


“The ship was transporting various types of illegal equipment, including nets which pick up just about everything, including small fish and fry,” Norwegian navy spokesman John Espen Lien said in a telephone interview Tuesday.


Is use of force a consideration?

Espen Lein refused to comment on reports that the KV Tromsø was considering firing a warning shot.


The Norwegians are legally permitted to use force against Russian ships in the zone where the Elektron was arrested, Aftenposten reported. The crew of the KV Tromsø had wanted to put more inspectors aboard the Elektron with the use of a helicopter, and considered that firing a warning shot would force the Elektron to stop, the paper reported.


But weather conditions, with waves eight to ten meters high, made such a transfer impossible and the trawler continued its course toward Russia with the two Norwegian inspectors on board.


“In accordance with international maritime law, the Russian navy won’t interfere in this situation. Everything will be solved on a diplomatic level and by the vessel’s owner,” Dygalo said in a telephone interview with Bellona Web.


The Murmansk and Moscow offices of the Federal Security Service (FSB) also denied any involvement in the incident.


An official with Russia’s Arctic regional border guard told Interfax news agency that Norwegian and Russian officials were co-ordinating their response and that the captured Norwegian inspectors’ lives were not at risk.

The Russian Ministry of Foreign Affairs has asked Norwegian authorities to provide full information on the incident pertaining to the trawler Elektron, which Norwegian naval forces are still chasing in the Russian economic zone of the Barents Sea some 350 kilometres away from Murmansk.


“All the necessary measures to solve the problem will be taken within as short a period of time as possible, after we get the needed information,” a spokesman for the Foreign Ministry told Bellona Web Tuesday. He would not specify, however, what he meant by the needed information.


Russian Foreign Minister Sergei Lavrov said Tuesday that he hoped a scandal would be resolved through negotiations today.


“Both sides understand that this emergency situation will be settled through negotiations,” the minister said, according to RIA Novosti news agency.


The Elektron’s captain said in an urgent message to the Murmansk trawler fleet radio centre Monday night that the ship needed help, according to the Russian Interfax news agency. The message was received at around 7 p.m. Moscow time.