Norwegian Prime Minister Jonas Gahr Støre was on hand to open the Bellona pavilion at the COP26 climate summit in Glasgow, Scotland Sunday, where he voiced his agreement with Frederic Hauge, the organizations’ head, that carbon capture and storage is a critical tool for reeling in greenhouse gas emissions. 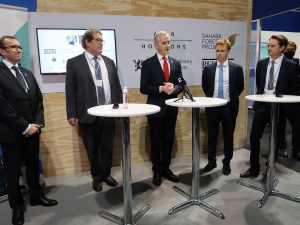 Norwegian Prime Minister Jonas Gahr Støre was on hand to open the Bellona pavilion at the COP26 climate summit in Glasgow, Scotland Sunday, where he voiced his agreement with Frederic Hauge, the organizations’ head, that carbon capture and storage is a critical tool for reeling in greenhouse gas emissions.

Together with the Sahara Forest Project, Bellona hosts the only Norwegian pavilion inside the so-called “Blue Zone” at COP26. The partners in the pavilion are Aker Horizons and the Norwegian Ministry of Foreign Affairs. Hauge and Prime Minister Støre were joined at the kickoff by Espen Barth Eide, Norway’s Minister of Climate and Environment, Kristian Røkke, CEO of Aker Horizons, and Sahara Forest Project Kjetil Stake.

The opening was attended by a large press corps from Norway and Bellona was the center of praise for its 30-year history at UN climate summits.

“It is not every day I can say that I completely agree with Bellona founder Frederic Hauge,” said Støre.  “But now I want to praise him for speaking so clearly about the need for carbon capture and storage (CCS). To achieve the goal of reducing emissions, we have to capture and store CO2.”

Støre was referring to a major interview the Norwegian newspaper VG published, wherein Hauge explained that: “Saying no to CCS in the looming climate crisis can be compared to saying no to vaccines in the face of a global pandemic” adding that, “There is not a single calculation that reaches the 1.5 degree goal without this technology.”

“When Frederic Hauge speaks, you at least listen,” Støre said, and emphasized the importance of developing an industrial solution for CCS so that it becomes commercially profitable and has a broad implementation.

“We have two important weeks ahead of us,” Hauge told the opening gathering. “Perhaps the most important weeks of our time. We will achieve results. What we at Bellona are doing here at COP26 is creating an arena where we focus on solutions. We must show that it is possible to solve climate problems. By focusing only on the problems, apathy arises, and nothing good comes out of it.”

Røkke of Aker Horizons thanked both the Prime Minister and Frederic Hauge and said that he was proud to be at the UN Climate Summit with Bellona.

Stake of the Sahara Forest Project (SFP) shared the news that his organization has just received 4.2 million Norwegian kroner from  Støre’s new government. The Sahara Forest Project, which was established at the initiative of Hauge, grows vegetables in solar-powered greenhouses and produced purified salt water in the Jordanian desert.\

“The support from the Norwegian state makes it possible to develop solutions to for changing global agriculture from being climate harmful to becoming climate-smart,” said Stake”. The Sahara Forest Project uses all that the world has enough of; salt water, sunlight, CO2 and desert to produce what the world needs more of; food, water and clean energy.”Eide, the climate and environment minister, concluded by saying that the key word for COP26 and for Bellona’s pavilion are solutions.

“In the climate context, there is not much talk about solutions,” he said. “As a rule the focus is on everything we should not do. But it is extremely important that we focus on what we can actually do.”