Norway is out of step with the world

The European Union, the United States and the other western countries with Arctic territory are now in favor of stopping oil and gas activities in the Arctic. Norway, on the other hand, continues to focus on drilling away.

Published on October 28, 2021 by Charles Digges

The European Union, the United States and the other western countries with Arctic territory are now in favor of stopping oil and gas activities in the Arctic. Norway, on the other hand, continues to focus on drilling away.

“Bellona has made a number of contributions to the EU Commission on the need to protect the Arctic environment from oil activities, and now it is finally happening,” says Sigurd Enge, Bellona’s specialist for marine and Arctic issues.

Last week, the  European Commission called for a halt to oil activity in the Arctic and threatened to stop to imports of oil and gas drilled in the region. Earlier this year, US President Joe Biden likewise proposed that the Arctic be protected from oil activity.

Erna Solberg, Norway’s outgoing prime minister, said no to such overtures, and the new incoming  government of Prime Ministe Jonas Gahr has stated that his government continue to search for oil and gas in the Barents Sea.

“Norway is completely out of step with the world when we insist on continuing to search for oil and gas in the Barents Sea, which is part of the Arctic,” Frederic Hauge, Bellona’s leader, says, adding wryly: “I am in danger of becoming an opponent of Norwegian EU membership because we cannot risk Norway gaining influence and destroying the EU’s climate policy.”

Bellona has fought an intense battle against oil and gas projects in the Barents Sea it was open to leasing process in the late 80s. In parallel, we have worked actively to influence the EU’s oil and gas policy, both from our Oslo offices and our office in Brussels, Bellona Europe. 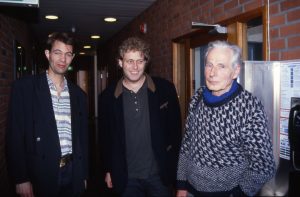 In the trial that followed the Ross Rig operation in the Barents Sea, Arne Næss testified for Bellona. From left: Sigurd Enge, Frederic Hauge and Arne Næss. Credit: Bellona

In 1989 the oil tanker Exxon Valdez ran aground in Alaska and illustrated with horrific vividness  what huge oil spills can do to the environment and showcased how nearly impossible they are to clean up in Arctic waters. In 1993, we acted against Shell’s exploration drilling with the Ross Rigg in the Barents Sea, and during our protests we broke the 50-meter safety zone around the rig, forcing the platform manager to cease drilling operations.

Oil spill response does not work in Arctic waters

Since then, Bellona has been a watchdog following the Norwegian oil industry, revealing breaches of license conditions, laws and regulations, and  has thus contributed to strengthening the Petroleum Safety Authority Norway’s mandate and authority.

“Our focus has always been on the risk and preparedness not reflecting the actual conditions that one encounters in Arctic waters,” says Enge.

“The oil spill preparedness we operate with on the Norwegian shelf does not work in Arctic waters with their dark days, severe cold, sea ice and harsh weather conditions,” Enge explains. “Moreover, the ecosystem in the Barents Sea is very valuable, productive and extremely vulnerable to human impact, especially oil spills.”

Bellona’s work with oil activities on the Norwegian shelf through the 1990s and 2000s has given us extensive experience and insight into the risk Norwegian oil activities pose to the environment.

“We represent one of the few environments with expertise relevant for the oil industry and management,” says Enge.

When the the Deep Water Horizon accident struck the Gulf of Mexico in 2010 in the worst commercial oil spill ever, Bellona was present as an important source of information for not just Norwegian media, but international media as well, such as the New York Times and the Washington Post, for whom Frederic Hauge explained the causes and the consequences of the accident. 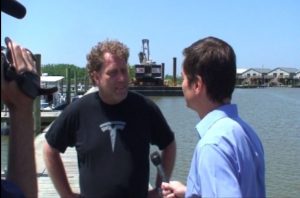 Frederic Hauge being interviewed by ABC News during the Deepwater Horizon spill in 2010. Credit: Bellona

When the EU applied the lessons of these experiences and established the EU’s offshore safety directive, Bellona was a natural contributor.

“We held firm on the need for protecting the Arctic against oil and gas activities, among other things, because they pose an unacceptable risk, and we called on the EU to take a clear position on the matter,” says Enge, who represented Bellona in the work.

Through our presence in Brussels, Bellona has participated in EU consultations with the oil industry, as well as with supervisory authorities and the European Commission. 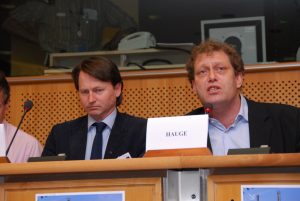 “I remember well the reception we held in the European Parliament with Vice President Diana Wallis in 2010,” says Paal Frisvold who headed Bellona’s Brussels office in the period 2002-2013. “The Norwegian members of parliament who came down to Brussels just  about gasped when they saw what we had set up in the largest reception area of the European Parliament’s large building in Brussels.”

With the help of Finnish and Danish members of the European Parliament, Bellona presented concrete texts that proposed a moratorium on all petroleum activities in the Arctic.

“We actually managed to get a majority for the moratorium in the EP’s environmental committee,” recalls Frisvold.  “But when it was presented in plenary, the Christian conservatives put in a text change that caused the moratorium to fail – but the description of the fragile conditions and risk of petroleum activities remained.”

An invitation from the European Commission

Bellona’s reputation for unparalleled expertise in Arctic offshore issues and our work with managing of Arctic areas in Norway, Russia and Svalbard meant that Bellona was also invited to help develop the EU Arctic Policy.

When the EU’s offshore safety directive was to be revised in 2018, Bellona was again invited.

– Our work in the EU has consistently focused on safeguarding valuable and vulnerable areas, such as the Arctic, and our insight into the risk that petroleum activity represents – not the least of which is the impossibility of handling any accident that might happen,” says Enge adding that that this now becomes a reality that Norway must also deal with via the EEA agreement.

“In the climate context, it is also an important recognition that melting sea ice and permafrost are two of the most important Arctic tipping points that have enormous consequences for the planet’s climate development,” Enge concludes.