Municipalities in Norway are moving towards stringent climate requirements for construction sites. With a combined population of over 1.4 million inhabitants (27% of Norway’s population), seven major cities have decided that emissions will be banned from construction sites from 2030 onwards. 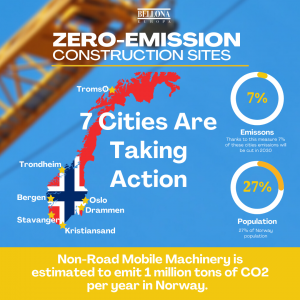 Looking for a solution to cut down on their carbon emissions, municipalities in Norway are moving towards stringent climate requirements for construction sites. With a combined population of over 1.4 million inhabitants (27% of Norway’s population), seven major cities have decided that emissions will be banned from construction sites from 2030 onwards. Although it may seem a marginal sector, Non-Road Mobile Machinery is estimated to emit 1 million tons of CO2e per year in Norway, 100 MtCO2e in Europe.

In Oslo, these emissions account for 7% of the city’s total emissions. This prompted the city to adopt extremely ambitious targets through their Climate and Energy Strategy, paving the way for other municipalities. Now Bergen, Trondheim, Stavanger, Drammen, Tromsø and Kristiansand have followed effectively creating a coalition of cities moving toward construction site decarbonization.

By 2021, the municipalities’ building and construction activities will be fossil-free. This entails that machinery will be either electric or powered exclusively with fuels made from renewable raw materials such as biodiesel.

By 2025, the municipalities’ building and construction activities must be emission-free. Therefore, only machinery  running on hydrogen or electricity will be allowed. This way, not only carbon emissions will be addressed but also air and noise pollution.

By 2030, all construction activities in the cities will be emission-free, both public and private. By this time, ten years of experience brought forward through public procurement will have created enough knowledge to allow for a large-scale deployment of zero–emissions machinery. 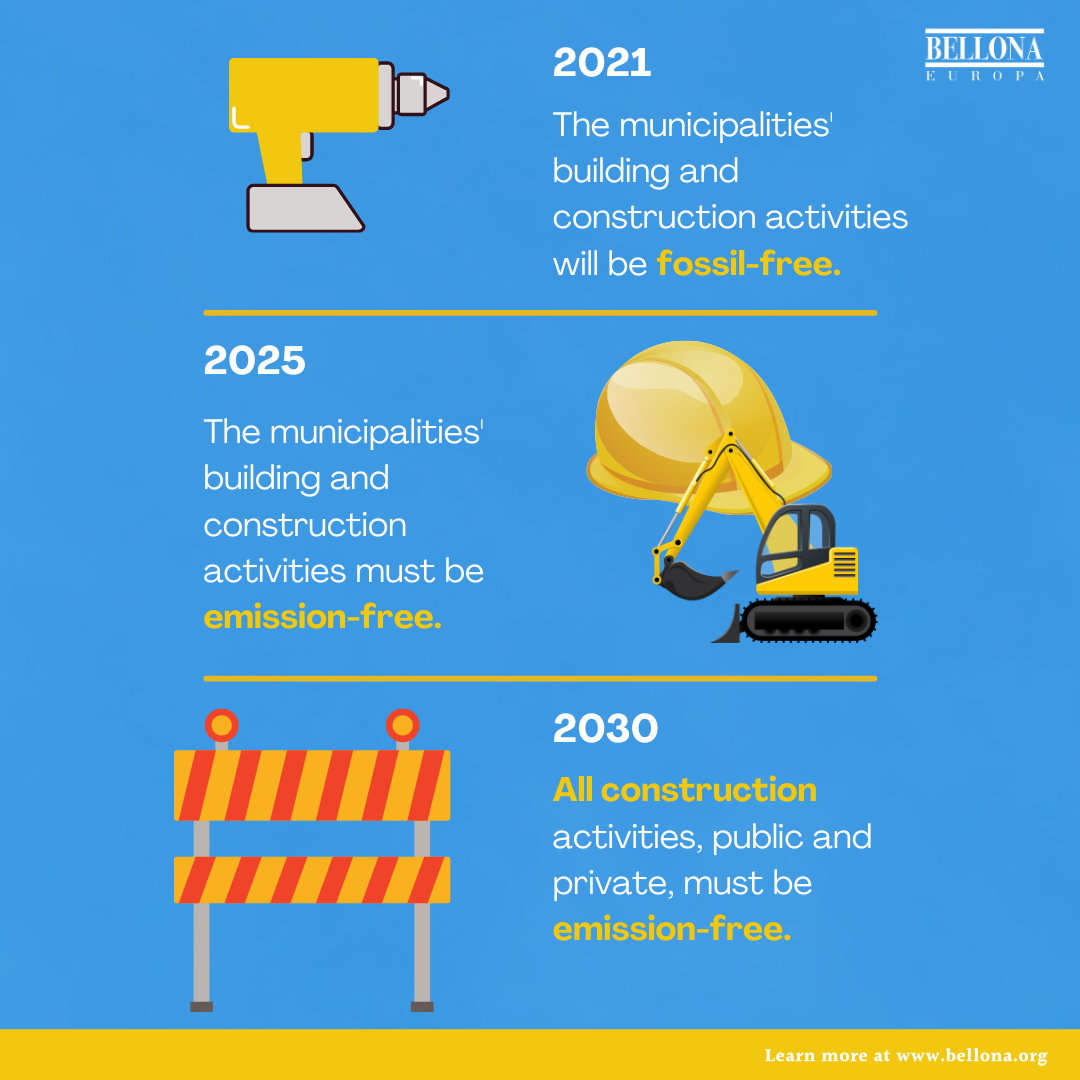 In Oslo, these targets were adopted after a couple of years of the climate agency’s intensive action. The city started supporting the shift from diesel to electric construction machinery  through the 2019 Climate Budget. Several measures were put into place including creating a market through public procurement, subsidising the purchase of zero–emission machinery, supporting the development of the electricity infrastructure and running a pilot project to demonstrate zero-emissions construction sites’ feasibility.

Ambitious targets have been adopted beyond Norway as well. In May, Finland started supporting  its cities’ action  by adopting the Green Deal agreement aiming at 100% fossil–free construction sites from 2025, 20% of which using electricity, biogas or hydrogen as an energy source. From 2030 the government will want 50% of them to be electricity, biogas or hydrogen. Similarly, Copenhagen, Stockholm and Amsterdam have started to move in this direction by supporting pilot projects and including green criteria in their procurement strategies.

Cities are acting taking the lead in this sector, showing the rest of the world that emission–free construction can be a reality.  These frontrunners’ action should be on inspiration for other cities across the EU, especially since tackling construction emissions can deliver extraordinary results in noise and air pollution reduction.

Municipalities took up the challenge of demonstrating that banning emissions in the construction site is possible. This is driving the conversation forward and creating a real shift in the market. This is why Bellona has actively engaged with local authorities, supporting their work and showcasing the results.

Nevertheless, cities don’t always have the freedom to set a highly ambitious target, sometimes finding themselves unable to go against national plans. This is the case in Norway, where urban development is regulated by the Planning and Building Act. It is yet to be determined whether these ambitious targets will be scrutinized however the central government is now engaging on the issue.

Finally, as of now, the European Union has not adopted any policy in this direction. Seizing the momentum created by municipalities to tackle Non-Road Mobile Machinery’s emissions would allow Europe to be the world front runner in this sector, reduce its emissions, and improve its citizens’ lives. Read more about this here: https://bellona.org/publication/position-paper-all-that-the-nrmm-regulation-isnt