Hydrogen in steel production: what is happening in Europe – part one

The steel industry accounts for 4% of all the CO2 emissions in Europe and 22% of the industrial carbon emissions in Europe. Several options for its decarbonization are possible: increasing the efficiency of current production methods, recycling of steel, carbon capture and storage (CCS) and hydrogen. Hydrogen as a solution to decarbonize industry has been receiving increasing amounts of attention. There are two ways in which hydrogen can be used in steel production: as an auxiliary reducing agent in the BF-BOF route (H2-BF) or as the sole reducing agent in a process known as direct reduction of iron or DRI (H2-DRI). This article will focus on H2-BF, while H2-DRI will be discussed in a future article.

Published on March 4, 2021 by Bellona Europa 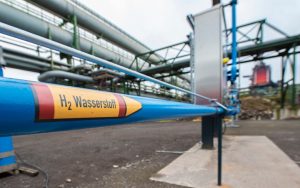 There are two ways in which hydrogen can be used in steel production:

This article will focus on H2–BF, while H2–DRI will be discussed in a future article. 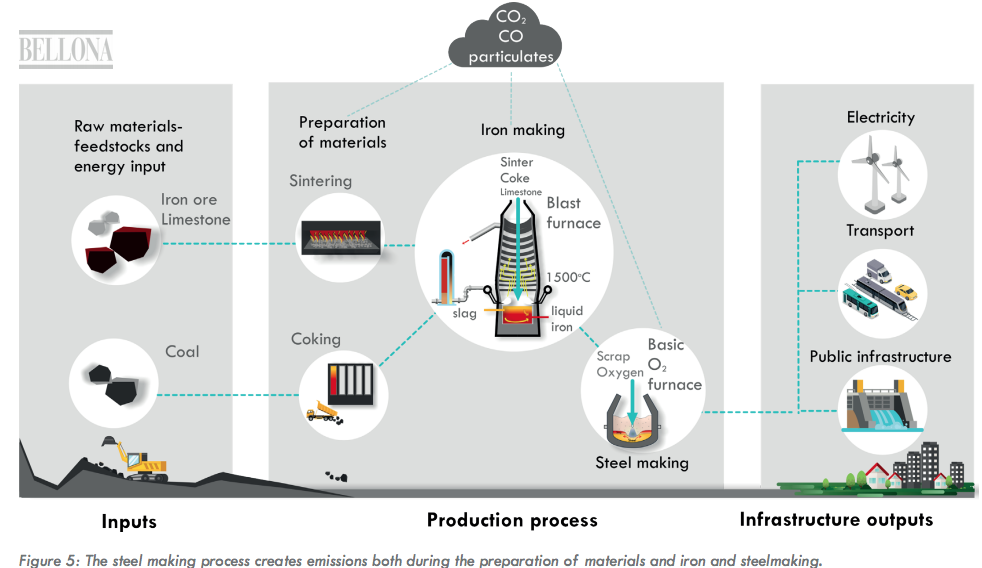 The BF-BOF route, also known as the primary production route, accounts for 60% of steel production in Europe. The majority of the emissions come from the blast furnace and the coke plant. The coke plant produces coking coal, which is used in the blast furnace both as a heat source and to reduce iron. H2-BF has the potential to reduce emissions both in the coke plant and blast furnace because it reduces the amount of coal needed and only forms water after reacting with iron ore instead of carbon dioxide. Today, the most common auxiliary reducing agents are pulverized coal (PC), oil, natural gas, or a combination of these, all of which produce CO2.

However, due to technical reasons, it is not feasible to only use hydrogen in a blast furnace and therefore, H2-BF is often seen as a transition towards H2-DRI to provide emission reductions in the near-term. Several European steel producers have plans for using H2-BF (table 1).

Of the several ways hydrogen can be produced, renewable energy coupled to electrolysis should be the priority as it achieves the largest emission cuts, ±21% [1], resulting from hydrogen use in the BF-BOF. Only three projects of the eight that were found state their intention of using green hydrogen from the start: ArcelorMittal in France, Voestalpine in Austria (project H2FUTURE) and TATA in the Netherlands (project H2ERMES). Thyssenkrupp expects to have some green hydrogen by the mid-2020s, but this will depend on how the share of renewables in the electricity grid evolves. If hydrogen is produced via electrolysis using German grid electricity, emissions could increase by 36.7% [2].

Hydrogen from the reforming of natural gas (grey hydrogen)

Some companies [3] say they will use green hydrogen when available at reasonable costs and quantities, a claim echoed by many in various industries. Under current policy frameworks the date for these conditions to be fulfilled is unknown, yet unlikely to be in the near-term. In the meantime, they’ll use grey hydrogen. For example, Thyssenkrupp’s Duisburg project announced it will acquire hydrogen through Air Liquide’s regional hydrogen network in the meantime. Considering their H2-production portfolio the hydrogen is likely to be grey. Using grey hydrogen, emissions would be reduced by only ±2.1% [4], ten times less than in the case of green hydrogen. Adding CCS [5] to the reforming process (blue hydrogen) could reduce emission levels similar to green hydrogen (with some residual emissions). This will likely be needed to scale up hydrogen production more quickly.

Claims and reality of “climate-neutral” steel

Thyssenkrupp claims it will produce 50,000 tonnes of climate-neutral steel by 2022 using H2-BF. However, as shown, H2-BF can have varying effects on the carbon footprint of steel. But even under optimal conditions, it cannot make steel ‘green’, i.e. climate-neutral [6]. Close attention must be paid to avoid that any emission reductions are automatically equated to “climate-neutral” or “green” steel. Overall, its claim of climate-neutral steel by 2022 is dubious and calls for more scrutiny. Similarly, ArcelorMittal claims it is already delivering green steel even though it does not use H2-DRI nor BF-BOF with CCS at a meaningful scale yet [7].