Published on December 15, 2020 by Bellona Europa 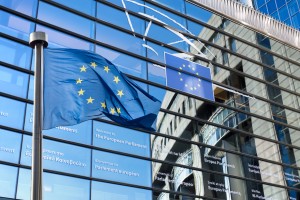 The much-anticipated draft TEN-E Regulation was released this afternoon. While important steps have been taken to align the TEN-E with the EU’s increased climate ambition and targets and turn the instrument into an enabler for a net zero emissions Europe, great opportunities are missed when it comes to the development of the EU carbon dioxide (CO2) transport and storage network. Garbled language and continued eligibility of fossil gas projects spark concern.

Fossil Gas: Not excluded, just hidden
While some observers may claim reason to rejoice as the draft no longer includes a dedicated natural gas category, it has merely been replaced by the category “smart gas grids” with references to various forms of “renewable and low-carbon gases”. In fact, Bellona Europa has reported on deliberate attempts by the gas industry to obfuscate the future gas mix by using misleading or confusing terminology, with specific references to “decarbonised” and “renewable” gas, in the past– and our point still stands.

The inclusion of ill-defined low carbon and renewable gases in the draft TEN-E Regulation published today, would still allow fossil gas projects and development of new fossil infrastructure to be eligible for Project of Common Interest (PCI) status. Without clear enforceability or accountability written into the Regulation, new gas infrastructure that has the potential to transport bio-methane and synthetic methane will be eligible for support. As these gasses are chemically identical and interchangeable with fossil gas, all existing and planned gas infrastructure is easily accommodated for in the revised TEN-E.

For example, building a fossil gas pipeline today that comes with a narrative that the pipeline is “ready” to transport “renewable or low carbon gasses” in the future is all that is needed for gas to re-enter the TEN-E. This gas infrastructure will be described as “Future Ready”, “Synthetic Methane Ready” or even “Hydrogen Ready” but will transport fossil gas for the foreseeable future.

A gas pipeline that is “ready” to transport renewable gases is totally non-binding and provides no mandate for that infrastructure to develop or transport new lower carbon gasses.  We do not need to look far to see how intentionally unenforceable “readiness” is. For more than a decade every fossil gas and new coal power plant in Europe was built to be “CCS Ready”. In reality this means next to nothing, with zero tangible modifications to the design or planning of the plant. Being CCS ready imparts zero additional mandate to reduce emissions or deploy CCS. In reality it was nothing more than a lazy box ticking exercise. Read more on CCS readiness here.

The illustration below was presented by the gas industry during the last Madrid Forum, the biannual European gas regulatory forum that brings together gas stakeholders and EU policy makers, and it provides their view on how renewable, decarbonised and low-carbon gases should be defined. However, as our comments in red point out, these categories of renewable and decarbonised gases are not as green as they seem. 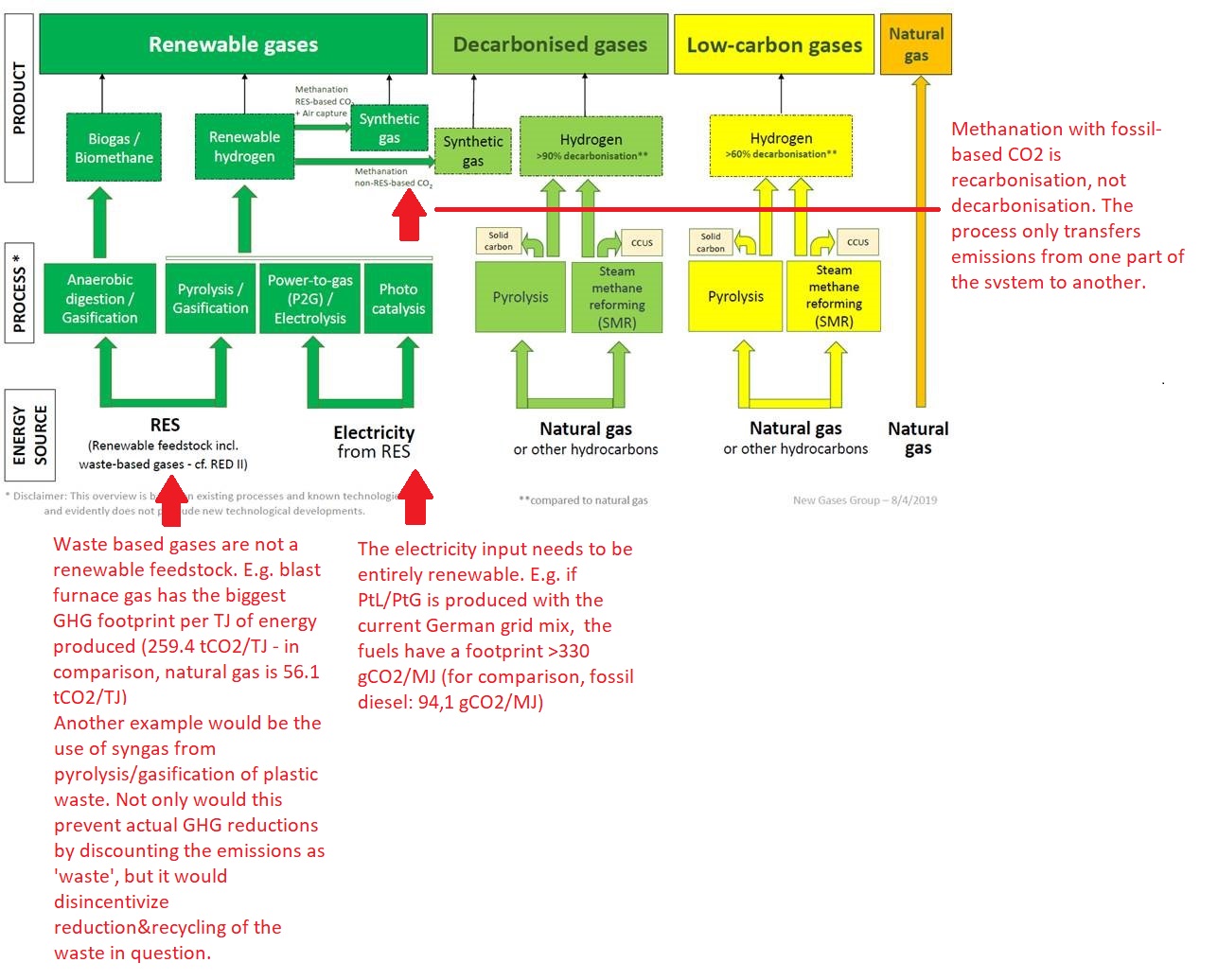 Notably, the inclusion of ‘Synthethic gas’, produced by the methanation of fossil CO2, will result in recarbonisation (of the hydrogen used, which should be used directly as a clean fuel, not combined with fossil carbon) rather than decarbonisation. If the CO2 comes from a fossil source, the methanation process only transfers emissions from one part of the system to another, where they escape back into the atmosphere when the ‘synthetic gas’ is combusted.

Presenting hydrogen as part of this patchwork quilt of terms, when both a dedicated hydrogen category and electrolysis category is included in the draft TEN-E, is reason for concern. Despite the Commission claiming that PCIs sustainability assessment has been strengthened in the revised TEN-E, they do not safeguard the climate impact of the Regulation and differ between categories. Included in two categories, this means hydrogen not in line with the sustainability assessment in the hydrogen category could be eligible as a PCI under the “smart gas grid” category – with a different set of criteria. This, in combination with the unclear nature of the sustainability criteria, jeopardizes the climate impact (or indeed relevance) of the TEN-E by e.g. allowing support for hydrogen from non-renewable electricity.

We cannot allow garbled language to justify the further development of already extensive gas infrastructure, when by the European Commission’s own admission: “Considering that the future natural gas demand is estimated to significantly decrease in line with the Green Deal objectives, natural gas infrastructure no longer needs support through the TEN-E policy”.

The monumental challenge of deploying enough renewable energy to phase out fossil fuels must not be compromised by these ineffective and damaging ‘solutions‘ – the priority must be to deploy wide-scale electricity transmission infrastructure if we are to have any hope of meeting the EU’s net-zero target.

CO2 Transport: Retained, but the continued exclusion of CO2 storage and alternative CO2 transport modalities is a missed opportunity.

It is encouraging that the European Commission has retained “Cross-border carbon dioxide networks” as a priority thematic area, quoting “limited evidence to remove carbon dioxide networks from the TEN-E Regulation”. Amidst widespread agreement on the important role played by CO2 Capture and Storage (CCS) facilities and infrastructure on the path to climate neutrality by 2050, CO2 transport’s continued eligibility as a PCI is vital, and Bellona Europa commends the European Commission for taking our recommendations into consideration. It is worth noting, however, that the current draft misses an important opportunity in not including all transport modalities, increasing the flexibility of the system under development and hence its cross-border benefit.

Far less encouraging is the continued exclusion of CO2 storage infrastructure – a nonsensical approach in direct contrast to the prerequisites necessary to develop a European cross-border CO2 network. There is great potential for cross-border benefits to more than one European Member State through CO2 storage projects, notably as CO2 storage capacity is not equally distributed. Providing EU industry with access to CO2 storage is a key enabler for decarbonisation and equal access hence a prerequisite for a functioning single market, a core competence of the European Commission. Transport corridors are important, but ensuring CO2 storage capacity is timely developed in line with requirements beyond domestic emissions in the jurisdiction concerned is critical.

The demand for EU efforts to facilitate projects for CO2 storage was most recently illustrated by the “Non-paper on CCS” by the Netherlands, Norway, Denmark and Sweden. Coupled with the vital role to be played by CCS on the path to climate neutrality, this should make such projects eligible for PCI status under the TEN-E Regulation. Bellona Europa therefore finds it necessary to reiterate its previous points, urging the European Commission to revisit the current draft’s unwarranted exclusion of CO2 storage projects. Coupled with an inclusion of all transport modalities, as referenced in the previous paragraph, flexibility gains would increase the cross-border benefit further and go a long way in setting the necessary prerequisites for a developed and functioning European Cross-border CO2 network.

While the published Regulation boasts a “strengthening” of PCIs’ sustainability assessments, the presented criteria leave much to be desired. Albeit strengthened, this in and of itself is not impressive set against a baseline where sustainability assessments were optional and in the case of the 2019 PCI list not conducted for the 32 gas projects included. The EU Ombudsman criticised the 2019 PCI list as recently as November 17th, stating: “it is regrettable that gas projects were included on previous PCI lists, without having their sustainability properly assessed”. The Ombudsman concluded to abandon further inquiries due to Commission plans to take the “necessary action”. The result is disappointing and misses the mark.

The included sustainability criteria for energy infrastructure does not safeguard or ensure consistency with the target of climate neutrality by 2050. In addition to being non-specific and unclear, it does not sufficiently incorporate the climate impact of the actual usage/production of the project in question. And with issues of enforceability and accountability, as referenced above, there are few safeguards keeping the criteria more than simple pro-forma addition – or lazy box ticking exercise.