After a caustic, chaotic, and nearly unwatchable 80 minutes of the televised US presidential debate, the question finally came up.

Published on September 30, 2020 by Charles Digges

After a caustic, chaotic, and nearly unwatchable 80 minutes of the televised US presidential debate, the question finally came up.

“I’d like to talk about climate change,” said Fox News’s Chris Wallace, who was moderating the first showdown between Donald Trump and his challenger, former Vice President Joe Biden as they met in Cleveland, Ohio on Tuesday night.

It was a surprise question, one that hadn’t been included in the list of topics Wallace said he would cover before the debate. But it was even more stunning because direct questions about climate change haven’t been asked of US presidential or vice presidential candidates since 2008.

That’s 12 years and more than 720 minutes during which pretendants to the most powerful offices in the America have been excused from addressing the issue in a debate setting, according to a report by the policy group Climate Power 2020.

It was also the first time Trump, who has famously called climate change a “hoax” perpetrated by the Chinese, was forced to say why – despite overwhelming scientific evidence to the contrary – he thought that was so.

And it was the single moment during a contentious and bruising debate, characterized by crosstalk, interruptions and taunts that beleaguered viewers got a break. Throughout the preceding hour, Trump had talked over Biden, talked over Wallace, and talked over Biden some more – provoking Biden to lament at one point: “Will you just shut up, man? This is so unpresidential.” Trump nonetheless needled his opponent with personal attacks and spun conspiracy theories about how the election was rigged against him. For his part, Biden referred to Trump as a “clown,” a “liar” and “the worst president America has ever had.”

But for those 10 or so minutes after Wallace brought up climate change the tone slowed to something approaching civil as Trump engaged in one of the most detailed and revealing exchanges on the environment he has ever had in a public forum.

“Over four years you have pulled out of the Paris climate accord,” Wallace said to Trump. “You have rolled back a number of Obama environmental records. What do you believe about the science of climate change, and what will you do over the next four years to confront it?”

“I want crystal clean water and air, I want beautiful air, we now have the lowest carbon…if you look at our numbers now we are doing phenomenally,” Trump said.  “But I haven’t destroyed our businesses.”

He then went on to call the Paris accord a “disaster from our standpoint,” and said repeatedly that the wildfires engulfing the US West Coast – believed by experts to be abetted by climate change – have been caused by poor forest management alone. “The forest floor is loaded with dead trees. You drop a cigarette in there and the whole forest burns down.”

But Wallace wanted to know if Trump believed the science.

“What do you believe about the science of climate change, sir?” he asked. 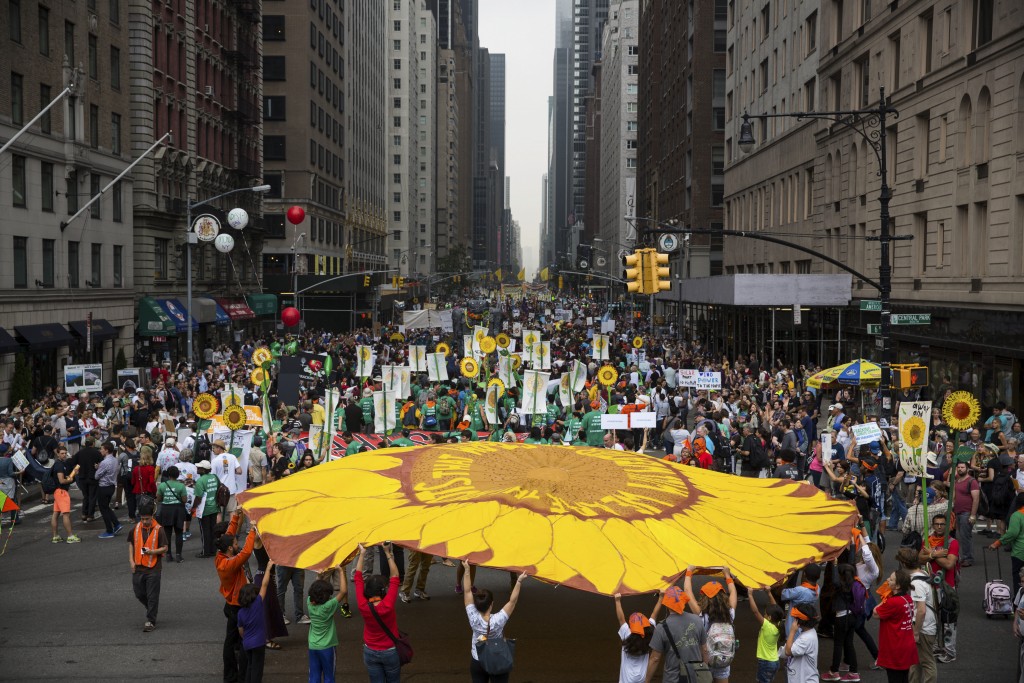 Climate marchers in the US after the inauguration of Donald Trump. Credit: Flickr

“I believe we have to do everything we can to have immaculate air, immaculate water,” Trump replied.  “And do whatever else we can that’s good.”

But Wallace held Trump’s feet to the fire. “Do you believe human greenhouse gas emissions contribute to the global warming of this planet?” he asked.

“I think a lot of things do but I think to an extent yes,” the president said.

Had the debate been held in front of a live audience, as debates before Covid-19 were, we might have heard a gasp. It was a telling moment in a presidency that has formed its polices from exactly the opposite perspective. One of Trump’s first public events after taking office was a White House ceremony devoted to the announcement that the United States was pulling out of the Paris climate accord. What has followed since has been an aggressive attempt to rollback dozens of  environmental regulations meant to protect Americans – and the world – from water and air pollution. Even the mere mention of climate change has been excised from government websites, most notably the Environmental Protection Agency

Drawing on that history, Wallace posed his next question:

“But sir, if you believe in the science of climate change, why have you rolled back the Obama Clean Power Plan, which limited carbon emissions in power plants?” asked Wallace.

“Because it was driving energy prices through the sky,” Trump responded. “Why have you relaxed fuel economy standards?” Wallace asked. “You’re talking about a tiny difference,” Trump said.

When Biden was called upon to respond, Biden spoke about his plans to spend $2 trillion during his first term to make the US run on completely clean energy by 2035.

“Nobody’s going to build another coal-fired plant in America. They’re going to move to renewable energy,” he said, ticking off the highlights of his proposal. “What it’s going to do is create millions of good-paying jobs. We are going to be in a position where we can create hard, good jobs by making sure the environment is clean and we all are in better shape.”

Then the debate, following a few more acerbic remarks, drew to a close.

All of which is to say that neither candidate deviated too far from what we already knew about them. That Biden would double down on the environmental legacy left by Obama wasn’t a surprise. Nor was it entirely shocking to hear that Trump’s stance against the science of climate change might have a crack or two – another one of those things his supporters tell us we’re not supposed to take literally.

But if there’s anything positive to come out of a debate that left most of the American electorate in shock, it’s that the question of climate change came up at all. The candidates will debate two more times before the November 3rd election day, and their vice presidential candidates will meet next week. Let’s hope this isn’t the last time the candidates are made to discuss how they would – or wouldn’t – address it.