The passing of US Supreme Court Justice Ruth Bader Ginsberg could have profound implications for America’s fundamental environmental laws and might help cement the Trump Administration’s attacks on measures meant to address climate change ¬–whether he reelected in November or not.

Published on September 23, 2020 by Charles Digges

Panorama of the US Supreme Court. Credit: Joe Ravi

The passing of US Supreme Court Justice Ruth Bader Ginsberg could have profound implications for America’s fundamental environmental laws and might help cement the Trump Administration’s attacks on measures meant to address climate change ­–whether he reelected in November or not.

Should the administration manage to confirm a nominee before the next president is inaugurated, it would shift the balance of the court possibly for decades, giving hardline conservatives, who are typically unfriendly to environmental regulations, a 6-3 advantage on the nine-seat judiciary.

Ginsberg was the Supreme Court’s longest-serving liberal justice and was best known for her advocacy on women’s rights. But she also played a critical role in opening courtroom doors to green groups and established broad interpretations of the Clean Air Act, Clean Water Act and other laws.

“If the Trump administration is able to get her successor confirmed […] it could mean that the environment always loses in the Supreme Court for a whole generation,” Robert Percival, head of the University of Maryland Carey School of Law’s Environmental Law Program, told E&E News. 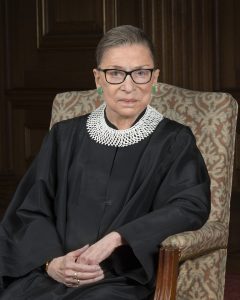 The death of the 87-year-old Justice Friday evening has already ignited a tense political battle in Washington as Trump has vowed to name a conservative replacement by the end of the week. Democrats have called Republicans hypocrites for seeking to replace a justice during an election cycle after refusing to do so after Antonin Scalia’s death in 2016 – effectively stealing a Supreme Court appointment from the Obama during the final months of his Administration.

Among the biggest cases the new court is likely to consider is the Clean Power Plan, which has been embroiled in litigation since the Obama era and is now a major target of Trump appointees to the Environmental Protection Agency.

That regulation, which was the signature environmental accomplishment of the Obama era, was established to reign in emissions from coal-fired power plants. But Scott Pruitt, who was then Oklahoma’s attorney general, challenged the rule and the Supreme Court, led by its conservative wing, stayed its implementation.

In 2017, after Trump’s election, Pruitt – who was appointed to lead the EPA by the new administration  – worked to replace the Clean Power Plan with a much less stringent rule: The Affordable Clean Energy Rule, or ACE, which mandates only that power plants improve efficiency rather than meet any specific carbon reduction goals.  After the ACE rule was finalized, Democrat-led states and environmental groups sued to have the rule thrown out. This has left both rules in a legal limbo.

It is expected that this case will sooner or later make its way to the Supreme Court. According to the Washington Post, the case is due to be heard before the US Court of Appeals for the District of Columbia Circuit – the last step before the high court – next month.

Should the Supreme Court rule in favor of the Trump administration, it would severely cripple the ability of any future president to use existing US laws to regulate climate gases produced by the power sector.

Such a case could also invite conservative justices to undermine a decision called Massachusetts v. the Environmental Protection Agency, which is a bedrock of modern American jurisprudence. This 2007 ruling obligates the EPA to regulate carbon dioxide and other pollutants that contribute to rising global temperatures and gives states and environmental advocacy groups standing in court to sue over climate change.

“If Trump is able to name Ginsburg’s replacement, that decision becomes a big target for those who want to shut down EPA regulation of greenhouse gases,” Michael Gerrard, an environmental law professor at Columbia Law School, told The Post.

Joe Biden as the Democratic presidential nominee has made combatting climate change a major plank of his campaign, and has vowed to reverse much of the Trump administration’s rollbacks should he win. But Ginsburg’s absence on the high court will make that job more difficult.

“If the people elect a new president and put both houses of Congress in the control of the Democrats, the Supreme Court with six conservatives could provide a hurdle that the agencies under new leadership will have a hard time overcoming,” Thomas McGarity, an environmental law professor at the University of Texas at Austin.

Still, the addition of a sixth conservative voice on the bench could cut two ways, ClearView Energy Partners LLC said, according to E&E News.

Indeed, Justice Neil Gorsuch, a Trump pick, led a 6-3 opinion this year that upheld the rights of gay, lesbian, bisexual and transgender employees in the workplace – a ruling that was unpopular with the Republican base. Chief Justice John Roberts, appointed by Republican President George W Bush, has joined his liberal colleagues in rulings against Trump in major administrative law disputes.

“On one hand, the additional vote […] could add to a layer of ‘pendulum proofing’ to protect against a Biden-driven polarity shift,” the consulting firm wrote. “For example, a Biden Administration could find it harder to demonstrate that it had a ‘reasoned explanation’ for rewriting final, Trump-era rules.”

On the other hand, the firm said, since conservative judges “tend to read laws as they were written,” another Trump appointee could further motivate Democrats to rewrite a number of laws if they gain a majority in the Senate, such that existing legislation passes muster with a conservative court.