Our Future in 2050: Majority of Emissions Could Come from Industry 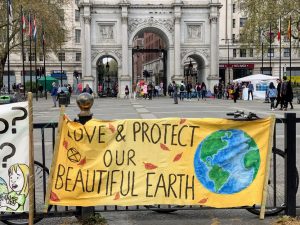 In 2015, 195 countries came together to sign the Paris Agreement, this brought hope to many that climate change would be recognized as a serious threat and action to improving the environment would finally take place. Yet, four years have passed with very little change to show. In response to this lack of action from the government, environmental protests have taken place worldwide. The driving force behind many of these movements are students who are justifiably worried about their future on this planet. In Brussels, protests have been occurring weekly since December but students can sense that they are being ignored. While these broad demands for climate change are valid, perhaps more focused efforts are needed to apply pressure on the big polluters. The following article will talk about the future of pollution and its biggest conspirators. 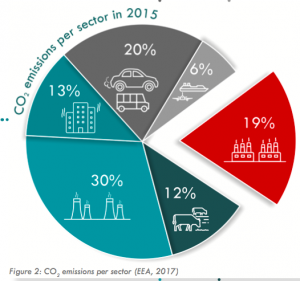 From the top: Current trends show that Transport is accountable for 20% of Co2 emissions, Marine and Aviation hold 6%, Industry is at 19%, while Agriculture is at 12%. Finally, Energy Supply is the largest contributor, responsible for 30% and the Residential sector is at 13% of global Co2 emissions.

As the figures above shows, in 2015 the energy and transport sector were the two biggest polluters. However, over the years green transitions have taken place and will continue to grow within the energy, transport, and even residential sector.

In the energy sector, renewables are beginning to grow while coal is in decline. In fact, wind and solar PV have had an annual average growth rate of 21% and 43% between 2000 and 2016 [i]. In 2016, global investment in renewables totaled more than investment in gas, nuclear energy and coal combined.

Transport is also becoming greener, with electric cars, busses and boats replacing internal combustion engines. Research has been focused on improving the battery storage and now a battery has been developed for heavy duty transport. Furthermore, there is a focus on policy within this field, with cities like Paris, Copenhagen and Hamburg setting to ban internal combustion engines within their city limits by as soon as 2020 [ii].

For the residential sector a variety of new technologies are being applied to make buildings more energy efficient. Methods for zero emission construction sites have also been developed, thus a decline of Co2 emissions can be predicted for this sector’s future. 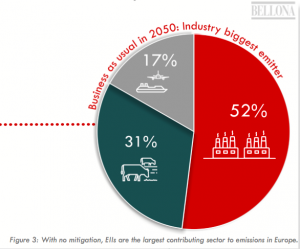 As the Energy Supply, Residential and Transport sector adapt and reduce their CO2 emissions, the Industry sector will continue to grow and become accountable for 52% of CO2 emissions by 2050. Agriculture will grow to 31%, and Marine and Aviation to 17% of global CO2 emissions.

While the Co2 emissions from the above-mentioned sectors begin to decline, the industrial sector is expected to continue growing, releasing more CO2 every year. Currently, student environmental activists are putting pressure on the energy sector, however as coal plants are slowing down and renewable energy is growing, they should begin a movement targeting the industrial sector. In absolute numbers, the climate impact of European industry (857 MtCO2) is already greater than the impact from all of Europe’s coal power plants put together (775 MtCO2) [iii].

The industrial sector contributes to a fifth of EU emissions and this is predicted to grow to 52% of emissions in Europe by 2050. Despite this realization, the industrial sector has so far been largely excluded from climate discussions and shielded from the requirements to implement effective action. Steel, cement, and chemical industry are some of the biggest polluters within this sector.

The production and use of cement contribute to approximately 5% of global greenhouse gas emission (although some estimate this is more around 8%), this is greater than the emissions of air travel [iv]. Cement is heavily used in construction, particularly to make concrete, which is the second most consumed material in the world after water.

Iron and steel industry accounts for around 5% of total global CO2 emissions, on average 1.9 tonnes of CO2 are emitted for every tonne of steel produced [v]. In general, over 1.3 billion tons of steel are manufactured and used every year and Europe is the second largest producer of steel after China.

The largest industry overall is the chemical sector, it is responsible for 10% of total energy demand [vi]. The high demand for energy, along with an extensive use of fossil raw materials, makes this sector one of the biggest emitters on the planet [vi]. Plastics is a big part of the chemical industry and if the current growth of production continues, plastics (not including other chemicals) will make up 15% of the global annual carbon emissions in 2050.

The energy, transport, and residential sector have begun to react to their contribution to climate change by developing and implementing new technology to reduce their emissions. Yet, the industrial sector has responded rather by claiming it is too big, too important, too valuable, and too much in global competition to be able to do more than it currently does, which is not enough. The industrial sector must face pressure in order to change, to prevent worsening environmental, political and economic repercussions that will arise as the world slithers towards a well beyond 2°C climate. As protestors it is important to mention these big industries in your march for a better and greener future.  So far industry has remained largely ignored and avoided, it is time to turn the attention to them to help our planet. If you are interested in finding out more on the emissions process in industry or solutions to cement, steel, and chemical production more related articles will be posted soon to the Bellona website.