ST. PAUL, Minnesota – As climate experts convene in Marrakech for the yearly UN climate change summit on Monday, one toxic cloud confronting the international community is the chance that Donald Trump might win the US presidential election.

Published on November 7, 2016 by Charles Digges 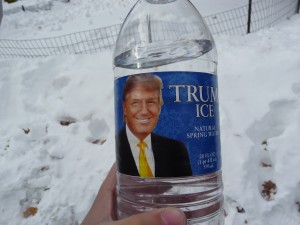 ST. PAUL, Minnesota – As climate experts convene in Marrakech for the yearly UN climate change summit on Monday, one toxic cloud confronting the international community is the chance that Donald Trump might win the US presidential election.

The blustering, bullying, alienating campaign of the Republican nominee has been short on fact, long on paranoia, and schizophrenic in its message.

But one falsehood to which Trump has consistently clung is his notion that climate change is a hoax pulled on America by China to suppress US industrial growth.

More famously, he has called climate change “bullsh*t” on Twitter.

As improbable as that and other of the candidate’s messages are, Trump’s gain on Hillary Clinton has put him within merely one point of the Democratic nominee.

Trump could win this thing, and his promise to rip up last year’s Paris Climate Accord has those gathering in Morocco worried.

Last December, the Paris Agreement was adopted by 193 countries that unanimously agreed to limit the rise in global temperature well below 2 degrees Celsius compared to pre-industrial levels.

“US leadership was critical in getting the Paris agreement across the finish line,” Elliot Diringer, executive vice president of the Center for Climate and Energy Solutions, told NBC news. “Many in Marrakech will be watching very closely for the election outcome.”

Trump has called the accord”bad for US business” and would allow “foreign bureaucrats control over how much energy we use.” The candidate has made an issue of reviving the US coal industry.

“Electing a climate science conspiracy theorist like Trump would make America a global laughing stock and embarrassment, all the while relinquishing our leadership role in the world,” said Khalid Pitts of the  Sierra Club said, according to the BBC. “Donald Trump’s moral failure to acknowledge the climate crisis might very well mean planetary disaster if he is elected.”

Making good on his promise to dismantle the Paris agreement within his first 100 days in office, Trump last week said he would cut all federal spending on climate mitigation efforts if elected.

There’s unanimous agreement in the scientific community that global warming must be addressed immediately or else its catastrophic effects will be felt by 2050.

“I believe a wise political leader should take policy stances that conform with global trends,” Xie told reporters on Tuesday. “”If [the republicans] resist this trend, I don’t think they’ll win the support of their people, and their country’s economic and social progress will also be affected.”

The Paris Agreement became international law on Friday. Now that it is operational and binding on countries, taking the US out of the deal would not be easy.

In a campaign that’s hinged on savagery and Trump’s narcissism, however, it’s no surprise that constructive debate on climate change initiatives to be undertaken by the United States has been entirely lacking. 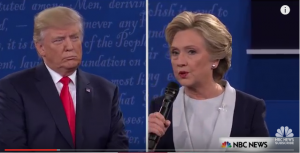 According to factcheck.org – one US media organization that hasn’t rushed to defend or attack either pole in this election – all three presidential debates, which totaled 4.5 hours, included less than six minutes of discussion on the candidate’s climate policies. Almost all of these mentions came from Hillary Clinton, who believes global warming to be a profound international threat.

Yet, even that is not so much the responsibility of the candidates as it is of the journalists following them – debate moderators, more interested in provoking Trump and Clinton to hotheaded personal attacks – simply didn’t bother to ask.

But Trump’s historic denial of climate change has led him to make numerous false claims.

In July of 2016, reported factcheck.org, Trump told Bill O’Reilly at Fox News that “people” at the Copenhagen conference in 2009 were “sending out emails, scientists practically calling it a hoax, and they were laughing at it,” adding that that’s why he “probably did” call climate change a hoax.

Trump was referring to the “Climategate” scandal. This controversy involved leaked emails and other documents of climate researchers at the University of East Anglia in England in November 2009, less than a month before the Copenhagen climate conference.

But in none of these documents did researchers call climate a hoax, nor did an international investigation set up by the University of East Anglia reveal any wrongdoing, factcheck.org reported.

It’s fitting that Trump’s obsession with email scandals – and intentionally misrepresenting what leaked documents mean – would have some time back.

But it’s precisely this obsession – most recently with the FBI’s investigation and recent exoneration of Hillary Clinton and her use of a private email server while Secretary of State – that threatens to paralyze the US government regardless of who claims victory in Tuesday’s election. 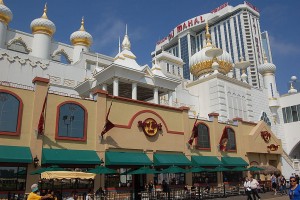 Trump has roundly refused to accept as legitimate any election result not naming him as the victor. He has promised to devote his presidency to suing women who have accused him of sexual assault. He has promised to jail Clinton over the email scandal. And, after praising the FBI’ s continued investigation of Clinton’s email server, Trump is now criticizing the FBI for concluding on Sunday tha Clinton is without blame.

Trump’s obsession with avenging his detractors is dangerous, even more so as he apparently has some 41 percent of a disaffected electorate behind him.

What most fear this will degenerate into is a calcified resentment of a deeply injured Republican majority in the House of Representatives against any legislative initiatives put forth by the White House should Clinton win, further derailing any substantial US efforts to combat climate change.