President Obama’s eighth and final State of the Union address was geared to lay down the gauntlet protecting his environmental legacy in make-or-break terms, signaling he’s ready to go to the mat to protect it.

Published on January 13, 2016 by Charles Digges 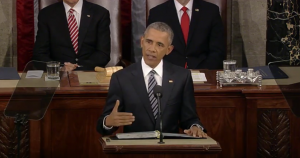 President Obama’s eighth and final State of the Union address was geared to lay down the gauntlet protecting his environmental legacy in make-or-break terms, signaling he’s ready to go to the mat to protect it.

The speech illustrated he’s come a long way since campaigning for his second term in 2012, when he soft-pedaled the green promises that helped bring him to office in 2009, to the frustration of environmentally minded voters.

2015, however, culminated in the Paris Climate Agreement in December, and saw Obama engaged in the environment – an historically unpopular topic in the US with the zeal of a president who literally has no office to lose.

Obama’s efforts last year saw him finalize his Clean Energy Plan, the centerpiece domestic environmental initiative that gave the US unprecedented credibility at the UN’s Paris Climate Talks in December.

He sank the controversial Keystone XL pipeline, and issued ban on Arctic drilling. And he went to Paris to sign on with 195 other nations in an effort to limit global warming to below 2C over pre-industrial levels, putting the US in the center of the most ambitious UN climate agreement ever.

Backing these initiatives in his address, Obama gave a nod to US business and the military.

“Look, if anybody still wants to dispute the science around climate change, have at it” he said. “You’ll be pretty lonely, because you’ll be debating our military, most of America’s business leaders, the majority of the American people, almost the entire scientific community, and 200 nations around the world who agree it’s a problem and intend to solve it.”

He underscored the urgency of the climate challenge, and in a canny way, drove it home as an opportunity to strengthen US business initiatives.

“But even if the planet wasn’t at stake; even if 2014 wasn’t the warmest year on record — until 2015 turned out even hotter — why would we want to pass up the chance for American businesses to produce and sell the energy of the future?” he said. 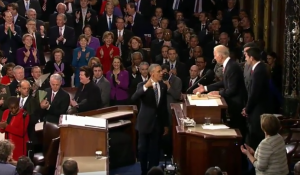 “I would say that speech gives a new tone on climate,” said Whiriskey. “No more is climate change the preserve of hemp wearing hippies or hand ringing liberals but it is simply good business. Global energy technologies are changing.”

While State of the Union addresses are typically long on political theater and short on actual brass-tasks policy proposals – especially final addresses from a two term president – Obama’s remarks nonetheless hit a number of hot-button climate issues that will only come to fruition if he uses the cudgel of executive privilege, sidestepping a truculent Congress.

Central to maintaining an environmental edge that no president in US history can boast will be Obama’s agility in staving off attacks from Republicans seeking to undo his Clean Energy Plan and other critical initiatives his White House has in the pipeline.

At present, Obama is pursuing new rules to cut methane emissions from the oil and gas industry; he’s pressuring Congress for more aid to communities hit by this years unprecedented flooding along the Mississippi River, as well as drought and other extreme weather tied to climate change.

Following the speech Administration officials and campaign groups said Obama is unlikely to let up on his climate initiative during his final year residing in the White House. They also acknowledged that work for the climate cannot stop after Obama leaves office.

“Without question, we made historic progress last year in fighting climate change, expediting our transition to a clean-energy economy, and protecting public health,” said Rhea Suh, president of the Natural Resources Defense Council, after the speech.

“As President Obama said tonight, though, much work remains. So even with the wind at our backs, we will redouble our efforts in 2016 in order to secure those gains and continue moving the country, and the world, forward.’’

“President Obama understands the economic costs of climate change – and the economic opportunities of solving it. So do American businesses,” Keefe said. “With the right policies, this is the year our country can really build on clean energy’s momentum and continue to expand our economy and protect our environment.”

“Entrepreneurs are entering the world of power generation, changing business models, distribution models and commercial relationships,” he said. “The technologies and American ingenuity that have shrunk a supercomputer into the palm of all our hands is now being played out in energy production.”

And Obama gave much to expect of his final year that he hoped would set the stage for many years to come.

“We’ve got to accelerate the transition away from old, dirtier energy sources,” he said. Obama criticized fossil fuel subsidies in a nod to one of the top priorities of environmental movement. 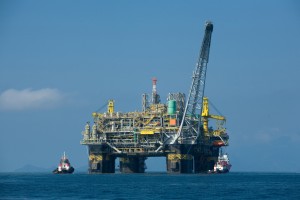 He said he planned to “push to change the way we manage our oil and coal resources, so that they better reflect the costs they impose on taxpayers and our planet.”

And he called for putting “tens of thousands of Americans to work building a 21st-century transportation system.”

Will Obama’s legacy stand the test of time?

Still, a number of initiatives Obama has spelled out over the past year require some tweaking to make them durable again whoever will occupy his seat after the next election.

This is especially important if it turns out to be current Republican front-runner Donald Trump, who recently summed up his attitude toward climate change on a radio talk show in garbled fashion.

There’s little question a Trump presidency could unravel environmental gains made under Obama.

What Obama needs to sew closed, then, are the initiatives begun this year. For instance, he should follow the ban on Arctic drilling with a ban on offshore drilling along the Atlantic Coast. Opposition has been staunch in well-heeled East Coast communities, but only Obama can close down the idea for good.

Methane, known as a short-lived climate gas, is 80 times as potent at trapping heat in the earth’s atmosphere than carbon dioxide.

Still, the EPA is grappling with ways to regulate old wells too.

Other initiatives Obama has on his desk for finalization are; tightening mileage standards for large trucks à la mileage standards imposed for private vehicles; controlling leaks of the Hydrofluorocarbon refrigerants, which, like methane, is another potent short term greenhouse gas; and stop venting and flaring of natural gas that comes out of on-shore oil wells on public lands.

Likewise, Obama will have to defend his Clean Energy Plan to the death. Already beset by lawsuits from the fossil fuel industry and conservative states attorney generals, the EPA and Obama’s Solicitor General Donald B Verrill are lining up in its defense.

The EPA meanwhile intends to push ahead with its implementation, according to Administrator McCarthy. Individual US states will be required to hand in their implementation plans between 2016 and 2018.

As Obama emphasized, Bellona’s Whiriskey sees a new America taking shape by jettisoning the old and embracing the new.

“Obama sees that future American technological leadership will be based on disruptive companies such as Tesla,” Whiriskey said. “American inventiveness and thus its future prosperity should not be held back by entrenched incumbents – American technology, science and business acumen can remake the world, this time as a low carbon world.”