Taking a historic step to fight climate change, the Obama administration proposed a plan Monday that aims to slash carbon dioxide emissions from existing power plants by 30 percent by 2030, in a design to accelerate the nation’s shift away from coal dependency. 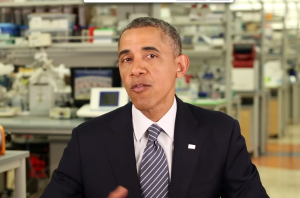 Taking a historic step to fight climate change, the Obama administration proposed a plan Monday that aims to slash carbon dioxide emissions from existing power plants by 30 percent by 2030, in a design to accelerate the nation’s shift away from coal dependency.

The Environmental Protection Agency (EPA) plan – which is President Obama’s largest climate effort so far – could help the United States prod other countries like China to pledge similar emissions cuts as part of a new international treaty that’s slated for negotiation next year in Paris under the aegis of the yearly Conference of Parties at the United Nations Framework Convention on Climate Change (UNFCCC’s) annual summit.

The administration had previously released rules for new power plants, which will essentially require plants to burn natural gas, or have technology installed that can capture and sequester carbon dioxide – the latter of which receives the robust support of Bellona. The EPA rules set out the first regulations for coal fired power plants ever in the US. (Source: Greenoptimistic.com)

The new rules released Monday have been under development for some time and offer no surprises. Their formation began with a Supreme Court ruling in 2007, under the administration of George W Bush, directing the EPA to regulate carbon emissions under the Clean Air Act.

In 2009, the EPA released an “endangerment finding” that led it to regulation of car and truck emissions – an initiative the Associated Press noted has doubled fuel economy for vehicles produced in the 2012-2025 model years.

The 645-page plan released Monday, expected to trigger legal challenges, allows US states flexibility in how to achieve the 30 percent emissions slash. But, predictable squabbling aside, US polls and statements from international climate leaders indicated the EPA plan is a welcome change.

A new ABC News/Washington Post poll found that seven in 10 Americans see global warming as a serious problem facing the country, enough to fuel broad support for federal efforts to limit greenhouse gas emissions – even if it raises their own energy costs, ABC news reported.

The poll, which was conducted before Obama’s announcement, found that 70 percent of those asked support limiting emissions from existing power plants, and, more widely, requiring states to cut the production of greenhouse gases within their borders.

“The move demonstrates that Obama is determined to address climate change despite a hostile House of Representatives and fierce industry lobbying efforts,” said Svend Søyland, Bellona’s senior adviser on international energy and climate policy. “It simply cannot be ignored in the run up to the climate negotiations in Paris in 2015.”

Connie Hedegard, the European Union’s commissioner for climate change, was quoted by the Associated Press as saying the new US rules are “the strongest action ever taken by the US government to fight climate change,” though she added the caveat that, “All countries, including the United States, must do even more than what this reduction trajectory indicates.” Yet, the regulations are the first of their kind for the United States’ existing power plants, which currently produce 39 percent of US emissions.

Bellona’s Søyland called the rules “a much needed boost of ambition given that the previous target for greenhouse gas emissions was almost achieved.”

“In a situation where coal-fired power plants are shutting down and hardly any new ones are in the pipeline, [the new regulations] should be achievable,” Søyland said, adding,   “We believe this will be a confidence boost for those considering investing in renewable energy in the US.”

What the new rules mean

EPA Administrator Gina McCarthy described the rules in further detail at a press conference in Washington Monday morning. Obama was not present for the press conference, The Huffington Post reported, but he did make a point of stumping for the new rules in his weekly Saturday radio and website video address. McCarthy focused on the problems stemming from carbon pollution, which “supercharges risks not just to our health – but to our communities, our economy, and our way of life.”

“For the sake of our families’ health and our kids’ future, we have a moral obligation to act on climate,” she said, mentioning potential benefits in business, innovation and investment.

She continued: “The science is clear. The risks are clear. And the high costs of climate inaction keep piling up.”

In his web and radio address Saturday, Obama made the case for using executive power via the EPA to limit power plant emissions.

“We limit the amount of toxic chemicals like mercury, sulfur, and arsenic that power plants put in our air and water,” Obama said in the White House video. “But they can dump unlimited amounts of carbon pollution into the air. It’s not smart, it’s not safe, and it doesn’t make sense.”

How they will be enacted by US states

But the EPA is giving states flexibility in how to meet those standards. States can direct power plants to cut emissions directly, either by switching to a fuel source with lower carbon emissions, such as natural gas, or by making upgrades to equipment or efficiency.

States can also meet the standards by increasing the amount of energy drawn from renewable sources such as solar, wind or hydropower.

McCarthy highlighted the fact that states get to determine how to meet those standards in her address.

“The glue that holds this plan together – and the key to making it work – is that each state’s goal is tailored to its own circumstances, and states have the flexibility to reach their goal in whatever way works best for them,” she said.

For the seven year slog that has led to this new set of regulations, they will not take effect for at least two more years – after Obama has left office, and relying on the hope that his successor will maintain the zeal.

Obama has asked the EPA to finalize the plan by June 2015 and initially wanted each state to submit its plan by June 2016. The EPA proposal gives states until 2017 or, if they make joint efforts with other states, 2018.

Other US-based environmental groups welcomed the proposal, citing its both its climate and public health benefits.

Former Vice President Al Gore, a prominent environmental advocate, called it “the most important step taken to combat the climate crisis in our country’s history.”

Frances Beinecke, president of the Natural Resources Defense Council (NRDC) said in a statement yesterday that, “The EPA’s proposal to limit carbon pollution from power plants for the first time ever is a giant leap forward in protecting the health of all Americans and future generations.”

“It sets fair targets for each state and empowers the states with the flexibility to craft the best local solutions, using an array of compliance tools,” she said, adding, “And if states embrace the huge energy efficiency opportunities, consumers will save on their electric bills and see hundreds of thousands of jobs created across the country.

Opponents of the proposal are lining up largely among party lines. In the Weekly Republican Address – traditionally an opposition rostrum for the Saturday Presidential address – Wyoming Senator Mike Enzi accused Obama of “set[ting] out to kill coal and its 800,000 jobs.” If the EPA plan succeeds, said Enzi, “we’ll all be paying a lot more money for electricity – if we can get it.”

In her address to reporters yesterday, McCarthy dumped water on critics of the plan, saying they have “time after time […] cried wolf to protect their own agenda.”

She said opponents’ past dire predictions about the economic costs of reducing urban smog in the 1960s, and acid rain in the 1990s were stoutly proven wrong.

“We can innovate our way to a better future,” McCarthy told reporters. “From the light bulb to the locomotive, from photovoltaic cells to cellphones, America has always turned small steps into giant leaps.”