In a major overture of environmental engagement, the Obama White House last evening rolled out trenchant scientific findings that climate change is already impacting every corner of the country from oyster farmers in Washington State to cattle farmers in Oklahoma to maple syrup producers in Vermont, and said that urgent action is needed. 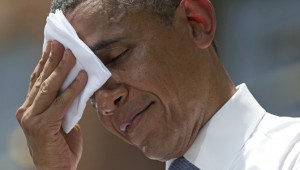 In a major overture of environmental engagement, the Obama White House last evening rolled out trenchant scientific findings that climate change is already impacting every corner of the country from oyster farmers in Washington State to cattle farmers in Oklahoma to maple syrup producers in Vermont, and said that urgent action is needed.

The new climate findings, which are heavily touted on the White House website, and which sent President Barack Obama himself on a national media extravaganza, evidence a massive push to stamp his environmental imprimatur on his administration’s legacy, despite heavy domestic hurdles that have ensnared it.

And the report’s findings that climate change is, in fact, a domestic issue is the central nerve the administration aims to hit.

“Climate change, once considered an issue for a distant future, has moved firmly into the present,” the report said in an update to the third National Climate Assessment, adding: “Multiple lines of independent evidence confirm that human activities are the primary cause of the global warming of the past 50 years.”

Further acknowledgment of this is the report’s structure, which is centered around two strategies: Minimizing the effects of climate change at home by reducing its causes, known as mitigation, and preparing for the impacts that are underway or certain to occur, or adaptation.

The some 300 climate scientists who spent four years contributing to the update said that water is growing scarcer in dry regions of the US, torrential rains are increasing in wet regions, heat waves are becoming more common and more severe, wildfires are growing worse, and forests are dying under assault from heat-loving insects. Floods in lower Manhattan as Superstorm Sandy, a combination hurricane and blizzard, pummeled the Northeast coast of the US in October 2012. (Charles Digges/Bellona)

And these dire changes have taken root amid only modest average warming over most land areas of the country in the past century, the scientists found. If greenhouse gases like carbon dioxide and methane continue to escalate at a rapid pace, the report said, warming could conceivably exceed UN established limits of 2 degrees Celsius the end of this century.

“Summers are longer and hotter, and extended periods of unusual heat last longer than any living American has ever experienced,” the report continued. “Winters are generally shorter and warmer. Rain comes in heavier downpours. People are seeing changes in the length and severity of seasonal allergies, the plant varieties that thrive in their gardens, and the kinds of birds they see in any particular month in their neighborhoods.”

Many US environmental and public health groups hailed the report as a major refocus from abstract concepts to concrete outcomes that will result in more support to address climate change.

The report includes a section detailing the regional impacts of climate change so the American public can see how it impacts them where they live.

“The report is very thorough and is grim reading about how global climate change is evident in the United States,” he said. “Even the most militant climate skeptics should now reconsider their views.”

Unlike a major United Nations report on climate released earlier this year, which looked at North America as a whole, the sweeping US report that tops 800 pages outlines in detail the effects on different geographic regions and segments of the US economy.

For instance, where residents of the coastal Northeast could face larger storm surges and coastal areas around the country are at more risk for flooding, the southwestern United States is likely to see more wildfires and severe water shortages. Manhattan’s flooded lower east side in the wake of Superstorm Sandy. (Charles Digges/Bellona)

Alaska will suffer drastic hits. Glaciers and tundra there are melting, storms are gnawing away at fragile coastlines no longer protected by winter sea ice, and entire communities are having to flee inland – a harbinger of the large-scale migrations the report forecasts for the rest of the country.

In the Northeast, the report found significant increases in torrential rains and risks from rising seas that could lead to repeat performances of Superstorm Sandy and its devastating urban flooding.

In the Southwest, said the report, increasingly apparent water shortages off a foreshadowing of “severe and sustained drought [that] will stress water sources, already over-utilized in many areas, forcing increasing competition among farmers, energy producers, urban dwellers and plant and animal life for the region’s most precious resource.”

The study was overseen by the government and received final approval at a meeting Tuesday, US media reports said. Thirteen government departments and agencies, from the Agriculture Department to NASA, were part of the committee that compiled the report, which also includes academics, businesses, non-profit organizations and others.

The White House wishes to maximize the impact of the update’s findings and impress on Americans a sense of urgency about climate change, which, though a centerpiece of Obama’s 2008 election campaign, was defused by domestic economic downturns.

Søyland said the new report is a parry at Americans who continue to dismiss evidence of anthropogenic climate change. Politically, the report is hoped to build support for new climate regulation that Obama plans to roll out in June – to no small opposition.

Direct to the people

It is also notable that instead of announcing the report’s findings in a White House speech, Obama took a direct grassroots appeal to the airwaves – giving interviews on climate change to weather broadcasters small and large – in an attempt to connect the catastrophe of climate change and global warming caused by carbon emissions directly to changes Americans are already seeing. Major US media outlets reported this strategy had been in the works for months.

“[The US public] gets that climate change is happening, they get that it is caused by human activity and support the solutions to climate change but they don’t feel that sense of urgency,” John Podesta, an Obama adviser, told reporters Tuesday.

Podesta told a press briefing that cabinet members would fan out across the country in coming weeks to discuss the report’s findings.

The report includes “a huge amount of practical, usable knowledge” that state and local decision-makers can use, Podesta said, adding that it also helps make the clear case for the need for regulating carbon pollution.

Søyland added that the report is structured in a pedagogical fashion that gives detailed advices on measures America should take.

“Among other things, [US residents] may have to build houses and roads differently. There may be large areas you cannot make use of because they are too close to the sea or rivers that may overflow or near forests with a high risk of forest fires,” he said.

Obama’s heavy support of the new update is hoped to put some political air beneath the wings of his Climate Action Plan, which was unveiled in June 2013 and focuses on executive actions he can use to rein in polluters.

The plan will enter a new phase in June, when the Environmental Protection Agency (EPA) proposes new emissions limits for the country’s power plants.

Many Congressional Republicans oppose those plans, and on Tuesday some accused the administration of favoring politics over science, at the expense of jobs and the economy.

But UN climate chief Christiana Figueres told Reuters that the report could lend a hand to UN efforts to strike a global deal in 2015 on tackling climate change, by issuing a clarion call to other countries – a role the United States had hoped to play at Copenhagen’s controversial COP15 climate summit.

“The essential reality of this report is that no country, powerful or poor, will escape unchecked climate change,” Figueres said.