Once again, climate envoys from rich nations, poor nations, nations under the threat of devastation by climate factors like rising seas and drought, and those too mired in their own domestic political headaches to focus, are convening Monday in Warsaw, Poland for the UN’s annual push toward securing a worldwide climate deal.

Published on November 11, 2013 by Charles Digges 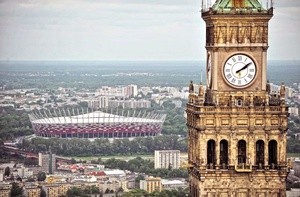 Photo: Ministry of Environment of Poland

The meeting comes as the Philippines reels from a massive typhoon that reportedly killed as many as 10,000 people, and recent reports that say climate change will exacerbate problems, like poverty and extreme weather, that are already in abundance.

The urgency of the problem was underlined in a recent report by the Intergovernmental Panel on Climate Change, the UN-sponsored body that provides the scientific basis for the negotiations.

The IPCC said in September with more certainty than before that humans are warming the planet, mainly through carbon emissions from the burning of oil, coal and gas. It raised its projections for sea level rise and warned that the Arctic Ocean could be nearly ice-free during summers before mid-century if the world doesn’t act to curb emissions.

And, less than a week ago, the World Meteorological Organization reported that concentrations of greenhouse gases in the atmosphere were higher than ever.

“Global greenhouse gas emissions need to peak this decade, and get to zero net emissions by the second half of this century,” UN climate chief Christiana Figueres said last week.

No big breaks expected, but pockets of hope remain

Though no one is expecting major decisions at the conference in Warsaw’s National Stadium, whatever progress brought about by the two-week meeting will be viewed as a barometer of the world’s chances of reaching a binding emissions deal by 2015 that would be enacted by 2020, as laid out by the Durban Platform from the 2011 climate summit in South Africa.

There seems to be a new sense of urgency within larger nations that, as recently as the disappointing COP15 in Copenhagen in 2009, were happy to big-foot the progress toward such a deal and kick the can down the road for later UN meetings.

The United States, for instance has made serious inroads with China and India – the world’s other two main greenhouse gas emitters – on producing and using so-called “super greenhouse gasses” like Hydrofluorocarbons (HFCs), Svend Søyland, Bellona’s senior adviser on international climate change issues said ahead of the summit.

But will this be enough to get past the sticky stuff that seems to be more and more stuck to the soles of negotiators’ shoes with each passing year?

Søyland, along with Bellona Europa Director Jonas Helseth will be in Warsaw for the talk – while a major summit on coal takes place across town in fossil fuel addicted Warsaw.

Along with the new deals among China, India and the US, Søyland also spotlighted other rays of hope that could emerge from Warsaw’s smoggy clouds.

The United Nations Framework Convention on Climate Change (UNFCCC) will hold a special workshop on what it can learn from other climate conventions. The UN process has come under fire since COP15, and observers and negotiators alike have long begun to question its efficacy.

Søyland is also holding out hope for the Climate and Clean Air Coalition (CCAC), which at last year’s COP summit in Doha whose 25 member nations agreed to reduce soot, methane and HFCs – called short-lived greenhouse gasses – arguably the one success coming of that bland summit, which early got stuck in the usual quicksand of negotiating carbon dioxide cuts.

Bellona has been a member of the CCAC as a non-state partner since 2012.

Carbon negative strategies as well as Carbon Capture and Storage (CCS), which finally managed to wheedle the attention of UN delegates when Lord Nicolas Stern embraced it at an event held by Bellona at the COP18 in Doha, are also predicted to be a talking point in Warsaw, said Søyland. Stern is the author of the influential “Stern Review on the Economics of Climate Change,”  published in 2006, which outlined the catastrophic economic devastation climate change would bring.

Divided views on fresh air against a coal-stained backdrop

But Søyland foresaw a summit of contrasts, saying that Poland’s hosting of the summit and the coal conference at the same time is an “embarrassment.”

Another entertaining contrast, he said, should be found between Quebec and Vancouver, which will press for fulfilling Canada’s overdue climate obligations and Alberta and Canadian Prime Minister Stephen Harper, who are both stumping hard for the Albasca Tar Sands project in Alberta – a project widely viewed as one of the most emissions intensive methods of bringing oil to market.

Also of no small interest will be the activities of Claudia Salerno, chief climate negotiator for Venezuela.

Meanwhile, Søyland predicted that Russia would continue its old saw about holding on to its carbon credits from the first Kyoto Protocol period, which expired last year. The Russian delegation will also talk down soot emissions in the Arctic, an area where the country is banking its economic future, both in oil and gas recovery as well as the opening of the Northern Sea Route, over which the Kremlin says it holds exclusive domain.

Shipping and other heavy industrial activity Russia is encouraging via the Northern Sea Route leads to build ups of soot on the Arctic icecap, turning it from a reflector of solar radiation into a solar panel absorbing it, and accelerating polar ice melt. Yelena Kobets, Bellona’s expert on Arctic soot, will be at the Warsaw summit with Søyland and Helseth.

With the disappointing collapse of COP15 and a pervading sense that the UN system is just not working, UN Secretary – General Ban Ki-Moon will be pressing hard for this and other climate meetings before the criticial 2015 summit in Paris to show that the UN has relevance.

According to Søyland, Ban should push to avoid a “new COP15 situation” with negotiations continuing into overtime, even as many delegates from poorer nations and non-refundable airline tickets must fly out before decisions are reached.

Stumbling blocks to this could be Brazil and Saudi Arabia. Brazil, said Søyland, is expected to make the scene in Warsaw with its usual rhetoric of “historical responsibility,” demanding that the rich pay before any requirements are imposed on the poor, he said. Saudi Arabia, he said meanwhile, is also predicted to dodge emissions commitments by dressing itself up in delevoping nation drag.

What some observers have seen emerging in the of the run up to Warsaw is a looser agreement whereby countries set their own targets, but are subject to some form of review by other nations.

“The sort of model that’s emerging for Paris, this acceptance of the notion that commitments will be self defined, it’s a recognition that where the rubber really meets the road is at the domestic level, and the agreement needs to reflect that,” Elliot Diringer from the Centre for Energy and Climate Solutions told the BBC.

Some of that is evident in the United States, where President Barack Obama has been emerging from a first term torpor on climate issues, delivering in June a rousing declaration of efforts against climate change that brought, for the first time, the reality of mitigation efforts into the US lexicon on global warming.

And even though the US was the only industrialized nation to forgo signing the Kyoto Protocol, the Obama administration has worked to increase fuel efficiency standards in cars and trucks, worked to boost energy efficiency in federal buildings, invested government money in green energy, and has required that all new US coal-fired power plants constructed include CCS in their designs.

Other key details of the new treaty remain to be worked out, including whether all or parts of it should be legally binding. It’s also unclear in what form national offers of post-2020 emissions cuts and other climate actions will be presented and by when, the Associated Press reported.

Negotiators from richer nations will probably get pinned down – again – by their promises to help poor nations convert to cleaner energy sources and adapt to climate change in efforts to protect agriculture and drinking water.

Developed countries pledged in Copenhagen to finance these efforts to the tune of $100 billion annually by 2020.

The British charity Oxfam told AP that current financing is nowhere near that, noting that while rich countries have announced about $16 billion of contributions this year, much of it is in the form of loans.

Many key players, including the European Union, are pushing for countries to present their initial offers at a climate summit for world leaders called Secretary-General Ban in September next year.

“In Warsaw, we must agree to prepare strong pledges for the 2015 deal and to step up emission cuts over the rest of this decade,” EU Climate Commissioner Connie Hedegaard said, as quoted by AP.