WARSAW – As the COP19 UN Climate Summit in Warsaw enters its second week, advancing calls to reduce the world’s reliance on coal and other CO2 emitting forms of energy, the coal industry itself has snuck in a bit of a back-door summit of its own down the street to boost the energy of skeptics who aren’t shy about denying climate change even exists. 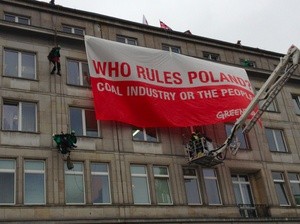 The International Coal and Climate Summit, taking place November 18 and 19, has as its venue the Polish Ministry of the Economy. The Summit has been clogged with protesters from Greenpeace since before it began, many of who infiltrated the building and others who unfurled a banner from its roof rearing “Who Rules Poland? The Coal Industry or the People?”

Friends of the Earth staged a protest action of their own, called Caugh4Coal, which featured a huge pair of inflatable lungs. 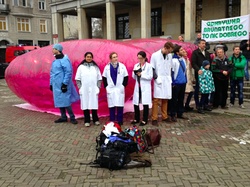 Let’s not fool ourselves

In his introductory speech to the coal summit, Milton Catelin, Chief executive of World Coal Association, made a case that 50 percent of on-grid power must come from coal if there is any hope of getting electricity to the developing world and its 1.3 billion people who don’t have electricity.

“The Kyoto Protocol doesn’t call for phasing fossil fuels out, but to decrease their emissions to a negligible level,” he said, but provided no roadmap for doing that in time to prevent irreversible climate change. Catelin’s claim that he is “not insisting all countries should rely on coal, even though that would be very profitable” seems dubious.

Janusz Piechociński, Deputy Prime Minister of Poland and the Minister of Economy of Poland, did not sound much more convincing when saying that Poland has a long term environmental and climate policy and strategy and is dedicated to its climate obligations.  In light of the just released report of Client Earth Poland his statement sounds almost ludicrous.

The report, entitled The implementation of EU environmental and climate legislation in Poland, states that most EU directives have not been transposed into Polish law in a timely manner, which has an essential impact on their implementation and which means that the objectives of those directives are largely compromised.

One could doubt if the minister means it when he says that “we should prevent, not cure events such as the typhoon in the Philippines,” especially when he states that coal will be an important part of the Polish energy mix in the decades to come. This was seconded by the statement of Paweł Smoleń, President of EURACOAL, saying that one can’t fight coal in Poland and that “coal will be here forever,” casting a shadow the Polish Government’s true intentions.

One of the Coal Summit’s biggest draws was a keynote speech by Christina Figueres, executive secretary of the United Nations Framework Convention on Climate Change. Figueres appealed to the summit for a frank, honest exchange on coal’s role in the world’s future energy mix.

“I am here neither to state the approval nor the disapproval of the use of coal,” she said, adding that what is needed is a not easy but a necessary path of the economic development taking into account poverty eradication and climate change.

She pointed out particularly that further capital expenditures on coal can go forward only if they are compatible with the 2 degree scenario. “We should close all existing subcritical plants and apply CCS (carbon capture and storage) on all existing ones, even most efficient coal plants and all the new ones.”

“It will be your children and my children, and their children and grandchildren who will judge our commitment to prevent climate change,” Figueres said.

While Jerzy Buzek, Member of the European Parliament and the former Prime Minister of Poland, said that lobbying should not influence the decision-making on climate change, Mr Catelin was reiterated that increased power plants’ energy efficiency is a low hanging fruit ignored by the environmentalists and should be enough to reduce climate change.

Catelin listened with a continual smirk to his colleague Christoph Frei, Secretary General of the World Energy Council, who said that in order to keep coal in the energy mix, the coal industry will need to look into water usage mitigation, pollution exposure and how to deploy CCS.

All speakers seemed to agree that CCS is a critical technology if coal continues to be a power source.  Brad Page, Chief Executive of the Global CCS Institute, said that, “we need to embrace two facts: climate change is happening and we have 1.3 billion people with no electricity globally, hence CCS is absolutely vital.”

He pleaded for a wide debate on policy settings allowing for the deployment of CCS.

Comments from the floor addressing concerns about coal’s connection to climate change brought ironic smiles to the faces of a few panellists. Statements by climate skeptics which came across as inexcusably naïve in the shadow of the Fifth Assessment Report by the UN’s International Panel on Climate Change (IPCC), seemed to have been accepted with no giggling or gagging. A case in point was Nigel Yaxley, managing director of Coallmp, who insisted that, “the UK is ahead of the game in having very stupid policies that have led to higher emissions through extending the lifetime of old, inefficient power plants.”

“That is because due to the fact that the new ones need to have CCS, which is uneconomical,” Yaxley said, and then fired a salvo of blame at the morning’s protesters:  “This is because people on the roof have taken control, instead of people from the room.”

Julia Huscher, Coal and Health Officer at HEAL (Health and Environment Alliance), asked how the coal industry can justify asking society to pay for their pollution when there is a ‘polluter pays’ policy in place in Europe. She referred to HEAL’s report about health costs of coal power plants, which for the first time calculated how the “emissions from coal power plants in Europe contribute to the burden of disease from environmental pollution.”

The report says that European Union-wide impacts of coal amount to more than 18,200 premature deaths, about 8,500 new cases of chronic bronchitis, and over 4 million lost working days annually. The estimated economic costs of health impacts from coal combustion in Europe are at up to €42.8 billion per year, according to HEAL.

A breath of fresh air

The International Coal and Climate Summit is disillusioning as it points out just how many climate skeptics remain, regardless of the evidence and recent gruesome events confirming the science proving climate change. It also shows that there is and will be a need to deploy CCS globally in the years to come.

It was a breath of fresh air on the first day of the Summit to see the presentation of Mike Monea, President of SaskPower, who introduced the first large scale CCS project in Saskatchewan, Canada that will be up and running in January 2014. Let’s hope that the second day of the Summit will bring more of ventilation into the hall filled of with stubborn coal fans.

Joanna Cieieslska of Bellona Europa is in Warsaw, and wrote this report.