Airlines are reaping windfall profits from a $3 passenger surcharge introduced to cover new costs from an European Union law regulating greenhouse gas emissions as the carriers receive most of their CO2 permits for free – creating a price boondoggle for travellers and a sweetheart deal for the aviation industry.

Published on February 12, 2013 by Charles Digges 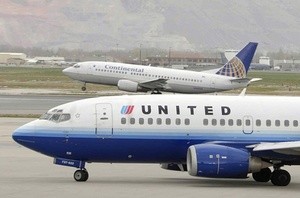 Five US air carriers including Delta Air Lines and United, and Continental last month imposed the price hike on their Europe-bound flights, just days after the EU on January 1 forced all airlines using its airports to pay for their emissions under the bloc’s cap-and-trade system, Reuters reported.

Yet, the current cost for complying with the scheme designed to tackle climate change is likely to be lower than $3 per passenger because airlines will be awarded two-thirds of their permits for free and the price they need to pay for the remaining emission certificates is languishing near record lows.

The net result, according to a study recently released by the Dutch-based consultancy firm CE Delft, would be a €1.3 billion windfall in profits by profits by the end of 2012 alone, pouring cold water on complaints by the airline industry over the “unbearable costs” of including aviation in the EU Emissions Trading System (ETS).

Delta Airlines, for instance, has reaped a tidy €29 million by collecting the windfall profits. United Airlines has pocketed about the same. And none of this money has gone toward its intended purpose of reducing the aviation industry’s massive greenhouse gas pollution.

Instead, this money should be going to developing countries that are desperate for the international community to commit substantial resources to fight climate change, particularly in areas vulnerable to extreme weather and sea-level rise. The international nature of air travel only makes contributions from the industry that much more logical.

Europe’s regional carbon-trading program started in 2005 and was expanded to cover European and international flights from the beginning of 2012. But that expansion plan drew ferocious opposition, especially from U.S. airlines and their congressional allies, who argued that aviation’s carbon pollution should instead be addressed through international negotiations.

The CE Delft report, commissioned by Transport & Environment (T&E), further revealed that air carriers would swallow the bulk of the new profit to the tune of €758 million – or nearly twice their €400 million in projected profits for 2011.

Including the aviation industry in the EU ETS would require that all airlines turn over sufficient allowances – so called “permits to pollute” to cover for all of their CO2 emissions in 2012. A majority of CO2 permits – equal to 85 percent of the aviation industries record breaking 2010 emissions – would be turned over to air carriers for free.

The remaining 15 percent, plus allowances to cover any emissions increases since 2010 would then have had to be purchased o the carbon markets. The costs would have been recovered by the airlines’ fare hikes throughout 2012, said Bill Hemmings, T&E’s aviation manager.

Yet there is evidence that airlines have not only been jacking up ticket prices to fund their “permission to pollute” allowances, but have also been sticking customers with much of the so-called cost of the 85 percent of free allowances, generating sweetheart profits in the deal. The CE Delft report revealed these out-of-the-blue profits amount to €870 million should the full value of the free permits be passed on as a cost to passengers.

According to Hemmings, Airlines for America (A4A), a lobbying group, spent more than two years convincing the Obama administration and Congress to oppose the EU scheme.

The report additionally said the anticipated free profits of passing the cost of the free emissions allowances onto customers will allow airlines to reap yet more jackpot profits from last November’s “stopping the clock” proposal from the European Commission, Hemmings said.

The “stopping the clock” proposal, explained Hemmings, delays the inclusion of flights to and from Europe in the ETS from 2012 to 2013 to give the International Civil Aviation Organisation (ICAO) more time for the development of a global solution to aviation emissions.

“This means carbon surcharges levied in 2012 on customers of intercontinental flights to cover the cost of CO2 allowances need now no longer be used to purchase these permits,” said Hemmings. “The ‘stopping the clock’ proposal therefore turns revenues raised by airlines to cover the costs of their CO2 permits into additional windfall profits for the industry.”

These extra revenues amount to additional windfall profits of an estimated €486 million.

The conclusions of the CE Delft report show that airlines will hence be able to stuff their coffers by €1.3 billion when all the money sacks of extra profit are added together.

“Passengers have paid towards fighting climate change – it is unjust for airlines to retain these windfall profits,” said Hemmings. “Air carriers should act responsibly and contribute these additional profits to the UN’s Green Climate Fund, created to support developing countries’ initiatives to tackle the impacts of climate change.”

Aviation Environment Federation director Tim Johnson said: “Airlines have a major stake in ensuring aviation becomes sustainable. Having relied on the argument that any solution must be global to undermine Europe’s efforts on the ETS, they have a special responsibility now to see that real progress is made within ICAO.”

“Simply pocketing over a billion euros of passengers’ money would not only damage industry credibility but also rightly prompt questions as to their real motives,” said Johnson.

“No airlines have responded to our call,” said Hemmings in emailed comments to Bellona. “They remain in denial.”