On the day of one of the most nail-biting US elections in recent history, one thing remains clear from the point of view President Barack Obama and challenger Mitt Romney’s environmental credentials – Obama thinks climate change is a threat, and Romney thinks it’s a laugh line.

Published on November 6, 2012 by Charles Digges 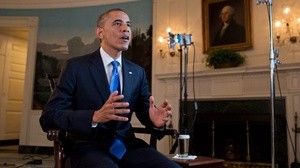 That, so far, is what we know from the campaign trail –and we have known it since both parties had their respective nominating conventions over the summer – but have heard little more on the subject since.

But Obama’s progress, whether he touted it or not, has not dropped from view.

“We never expected [Obama’s] work would be completed in a few years,” wrote Frances Beinecke, President of the National Resources Defense Council (NRDC) Action Fund, in a statement to Bellona.

“We need to rally around the chance to advance our progress in a second term.”

Romney famously drew howls of laughter by pointing to his opponent’s promise “to begin to slow the rise of oceans.”

Obama angrily retorted a few days later in his own nomination speech, saying: “Climate change is not a hoax […] More droughts and floods and wildfires are not a joke. They are a threat to our children’s future, and in this election you can do something about it.”

And then silence. In fact, the issue of climate change was not even raised in three televised debates, the first time the subject has gone unmentioned in a presidential race since 1988.

In times of economic woe for the US, campaign managers and handlers from both sides of the fight probably made the case to their candidates that the climate subject was taboo: It conjures implications of spending money to please foreign governments, pumping money into US industry to make it more efficient and clean, demanding more from automakers to make less polluting cars, and backing green businesses with federal funding.

But two things remain clear: what Obama has been doing has been working; he has by and large made steady progress on the heady environmental promises he made when he took office in 2008, often in the face of stubborn opposition. The other is that a large portion of his core electorate, polls showed, wanted to hear what he would do to further the initiatives he had already launched.

But Obama supporters like former President Bill Clinton and former Vice President, climate campaigner and Nobel Laureate Al Gore, picked up the baton of Obama’s environmental resume for him.

And surprisingly, in the wake of the destruction Superstorm Sandy wreaked on New York City, billionaire Republican Mayor Michael Bloomberg also threw his hat in the ring for Obama, citing that only an out of control climate could have rained devastation formidable enough to stop the New York Subway system – a powerful endorsement from a man whose usual references to Obama include expletives.

And while environmental worries are by most accounts in the US media the least likely of issues Americans are likely to pack in the baggage they bring to the polls today, it is pretty astounding what Obama has managed to do for the environment, especially with the rusty tools he was given.

“Many of our friends around the world don’t understand the amazing job that President Obama has done on climate and energy with very few resources,” said Dr. Andrew Light, a senior fellow with the Center for American Progress Action Fund, based in Washington DC.

“When the Republicans blocked a comprehensive climate bill the President did everything he could using his existing regulative authority to curb greenhouse gas emissions and promote a clean energy economy,” wrote light in an email interview with Bellona.

Light pointed to a recent report from Resources for the Future, showing that Obama succeeded in these goals.

“The US will certainly hit its goal to reduce our emissions 17 percent by 2020 and likely do better than that. If President Obama wins [today] then we can expect these policies to continue,” said Light.

Beinecke agreed, writing:“We have a long way to go to address the challenge of climate change, embrace the opportunities of a clean energy future and ensure the health of future generations. Obama, though, has made a good start.

Romney, on the other hand, has opposed all of these measures.

“Mitt Romney would bet our future on the fossil fuels of the past,” Beinecke said, adding, “We can continue to move forward with a clean energy revolution that reduces the carbon pollution that is warming our planet. Or we can turn back the clock on needed change – and turn our backs on the science and extreme weather before our very eyes.”

Indeed, America has been pelted this year with sweltering heat, withering drought, some of the worst wildfires on record, tornados that churned up the plains states and catastrophic Hurricane Isaac in the Gulf of Mexico – which brought the added benefit of oil churned up from the 2010 BP Deepwater Horizon blowout, depositing it along gulf shores.

And Superstorm Sandy, climate scientists have argued, is but a mere sampling of the kind of freak weather that is on the way. Climate change, in other words, is upon us.

Who offers the best lifeboat?

So, what, concretely, are the candidate putting on the table to avert these glimpses of Armageddon?

“Unfortunately we don’t know what Governor Romney would do if he wins the election,” wrote Light.  “He was a great supporter of a regional cap and trade initiative as Governor of Massachusetts, but then completely backed away from the reality of climate change as a candidate.”

We are left, then, with guesswork based on each of the candidates’ approaches to domestic energy policy – and what role the government should assume in its developments.

“A Romney campaign would likely leave us in the dark for a while on US energy policy and, I’m afraid, eventually begin dismantling the progress we’ve had so far over the last four years,” wrote Light.

One thing that is known of a possible energy future under Romney is a policy to drill. Everywhere.

In fact, an August article in The New York Times revealed that Romney’s energy policy was written in consultation with oil industry executives, including Harold Hamm, an Oklahoma billionaire who is the chairman of the Romney campaign’s energy advisory committee and chief executive of Continental Resources, an oil and gas driller.

The same week that revelation was made, the oil and gas industry held a fundraiser that netted $10 million for the Romney campaign.

And while Romney – whose rhetoric on the campaign has at times only tangentially been based on fact – has accused Obama of reducing domestic oil and gas production, the opposite, the NRDC’s Beinecke pointed out, has been the case.

“At 6.2 million barrels a day, US domestic oil production is up 24 percent since Obama was elected. Natural gas production is at an all- time high,” she wrote.

The importance of reeling in hydraulic fracturing

Part of the reason, though, is that the US is drilling in shale using an industrial technique called hydraulic fracturing, or “fracking,” Beinecke pointed out.

Fracking can be dangerous, threatening water, wildlife, and increases in the atmosphere of methane – the most dangerous of the greenhouse gases. The gas revolution, said Beinecke, has created a gold rush that “has outpaced the public safeguards we need.”

But while Obama has begun to put protective measures in place, she noted, Romney has pledged to put fracking decisions in the hands of individual states and allow the oil and gas development on federal lands.

“We’ll continue to produce oil and gas at home, no matter who sits in the White House the next four years,” wrote Beinecke.  “The question is whether we’ll insist that it be done responsibly or let the oil and gas companies do it their way.”

Over a series of interviews, the Center for American Progress Action Fund’s light has said much of that depends on how the Keystone XL issue is decided.

The Keystone pipeline originates in the Athabasca Oil Sands (tar sands) in Northern Alberta, Canada, and would carry synthetic crude and bitumen across British Columbia and further to the US, where it would be delivered to refineries in Illinois, the Cushing oil distribution hub in Oklahoma, as well as connections to refineries along Texas’s Gulf Coast.

When the project was met with clamorous environmental protest, Obama delayed further decisions on Keystone until 2013 so that environmental concerns could be further addressed, drawing blistering criticism from oil industry and Republican opponents.

Romney has taunted the Obama campaign over its environmental reticence over Keystone XL.  But Light has said in previous interviews with Bellona that the conundrum surrounding the Keystone project is both a climactic and an ethical one.

Among these are “how complicit” does America want to be in getting tar sands oil to market “given how big a carbon footprint” such a process leaves, said Light. “Is this a case were we want to encourage Canada to amass more wealth at the expense of the climate?”

Light added that Canada has made “no effort” to compensate the international community for the climate dangers bringing its oil to market has caused – in contrast to oil-rich Norway, which employs domestic climate mitigation technologies and is the biggest per capita contributor to world climate financing.

But weather Canada would offer such compensation would not be an issue under Romney, who has stumped for immediate approval of Keystone.

Romney has jeered that half the companies supported by ARRA failed, and that Obama cannot “pick winners.”

That half failed is a gross overstatement. Of nearly three dozen recipients of loans under ARRA, only three are currently in bankruptcy – notably Solyndra and two other solar manufacturers, Beacon Power and Abound Solar.

American voter fatigue will be no less a factor as the election winds up today than polling results, which suggest the election could tip either way.

Obama has wrapped up his campaigning while Romney still plans to hold two rallies. Whitehouse emails, however, continue to pour into Obama campaign subscriber’s email boxes urging them to get out and vote –and rightly so, suggests Beinecke, who sees a Romney victory as disaster.

“This election season has taken its toll – on all of us. The condescension, pandering and incessant spin. The outrageous levels of corporate spending. The disappointments, distortions, deceptions and lies,” she wrote.

“I’m as tired of it as anyone else. Now, though, is no time to falter. This is no time to lose heart […]We have a choice on Tuesday between two men for president. Barack Obama is the best choice for our future. We hold within our hands, each of us, the political power to make that choice,” she wrote.