In a debate dubbed by US media as a match between a “polished” and “confident” Mitt Romney and Barak Obama, who appeared to be “lackluster” and “losing step,” the candidates clouted each other with domestic energy policy but froze out any mention of climate change.

Published on October 4, 2012 by Charles Digges 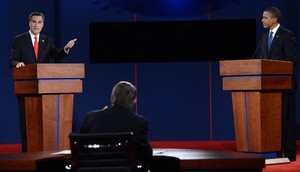 In a political arena that can be more focused on perceptions and theater than on issues, the touted victory of Romney in Denver, Colorado last night in the first of three presidential debates could spell trouble for Obama – the only candidate seen as likely to make any positive progress on environmental issues.

Last night’s debate focused on domestic policy – a possible reason that climate change, seen in the US as more of an international issue, did not appear on the agenda. The next debate, scheduled for October 11, will address foreign policy, and the finale, on October 16, will pit the candidates against on another in a town meeting setting.

Obama entered the first debate with a tailwind from recent polls that placed him ahead of Romney, thanks to the challenger’s recent publicized remarks accusing nearly half of Americans of not paying income taxes in 2011 and characterizing them as government dependents.

Whether the polls will continue to bear out in Obama’s favor after last night remains to be seen.

Regardless of the perceived loss, however, Obama did offer a vigorous and accurate portrait of his support of green energy policies over the last four years – even in under the shadow of Solyndra. The solar panel manufacturer received $528 million under Obama’s 2009 stimulus initiative, and later filed for bankruptcy.

The Romney campaign has wielded this like a cudgel, calling Solyndra “a symbol of gross waste,” despite the multibillion dollar loan guarantee’s ability to more than absorb the loss.

When will we hear about the climate?

But many groups still remain dissatisfied with the big dodge of the climate issue, which many in the US and international environmental community insist is a factor that needs to be addressed by both candidates to present a clearer picture of their over all environmental stance. Polling data has strongly suggested the candidates need to speak up on the climate – and fast.
Grassroots efforts fail – for now

To get the climate question on the agenda prior to last night’s debate, US environmental groups like the League of Conservation Voters and the Sierra Club mounted grassroots Internet petitions – collecting some 160,000 signatures – demanding that debate moderator Jim Lehrer address the topic that Obama in 2008 called “the greatest challenge of our generation.”

He didn’t. And while Obama and Romney traded blows on energy policy, neither of the candidates brought the climate issue up either.

“Millions of Americans felt the impacts from climate change this year, so it’s disappointing it wasn’t discussed,” Jamie Henn, cofounder of the climate advocacy group 350.org, which delivered an additional 52,000 signatures urging climate issues on the debate, told The Hill, a political newswire.

“Sadly, warming is a global issue too, so hopefully it will come up in the next debate focused on international policy,” said Henn.

Who can provide more domestic energy?

But the candidates wasted no time dueling over energy– which is an issue central to US job creation and the domestic economy.

He also zeroed in on falling domestic oil production has fallen. This assertion is not entirely true.

While overall oil production is rising and import reliance has been falling, production from federally controlled areas fell in 2011 after rising earlier in Obama’s presidency, according to the federal Energy Information Administration.

The temporary deepwater drilling freeze imposed after the 2010 BP oil spill in the Gulf of Mexico played a role in the downward production trend last year.
Romney’s domestic production pledge at environmental expense

Romney pledged to ram through approval for the environmentally controversial Keystone XL from the Athabasca Oil Sands (tar sands) to Gulf Mexico refineries. Obama in March approved the southern route of the Keystone pipeline, from Oklahoma to the Gulf, but has backed off approving the northern wing.

Bringing tar sands oil to market burns more hydrocarbons, which is the dirtiest type of oil, leaving an enormous carbon footprint, Dr. Andrew Light of the Center for American Progress has noted.

Obama backed off Keystone XL approval as a result these climate concerns, requesting further studies. But in the debate, he did not provide evidence these subtleties.

Instead Obama noted his support for domestically produced energy while accusing Romney of giving green energy and energy efficiency the cold shoulder.

“I think it is important for us to develop new sources of energy here in America,” Obama said. “I also believe that we have got to look at the energy sources of the future like wind and solar and biofuels.”

Inaccurate shots from Romney at the 2009 green stimulus act

Romney took aim at Obama’s American Recovery and Reinvestment Act (ARRA), which infused $90 billion in loan guarantees into alternative energy projects, and asserted that half the green companies backed by the initiative failed and were “losers.”

That half failed is a gross overstatement. Of nearly three dozen recipients of loans under ARRA, only three are currently in bankruptcy – notably Solyndra and two other solar manufacturers, Beacon Power and Abound Solar.

Romney further attacked Obama’s plans to eliminate $4 billion in tax breaks to oil companies, and compared the size of the subsidies to ARRA, saying the collapse of solar companies backed by ARRA will cost the government about $575 million.

But in creating ARRA, which has to date issued $34.5 billion in loans, Congress set aside $2.4 billion to cover losses, so the loan defaults are a relatively small proportion of the overall green stimulus portfolio.

An audit commissioned by the White House found that the loan guarantee program needed tighter oversight and stricter loan standards, the New York Times reported. But it found that the loss reserve was adequate to cover expected future defaults.

In further defending his plan to cut oil subsidies, Obama, striking a populist note, said, “Does anybody think that Exxon Mobil needs some extra money when they are making money every time that you go to the pump?”

Romney countered that many of the tax incentives go to smaller, independent companies, but signaled that his economic plan would put the cutting oil subsidies “on the table.”

The facts on gas production by hydraulic fracturing – environmentally dicey

Romney agreed with Obama that gas production was it their highest levels in years.

But he asserted that increase had come on private, not public lands, and that the Obama administration had cut gas permitting in half on public lands. This assertion is not fully accurate.

Production on private lands has increased more quickly, particularly through hydraulic fracturing, or fracking, for oil and gas in Texas, North Dakota and the Marcellus Shale formation in Pennsylvania and Ohio.

While fracking natural gas deposits in shale have since the early 2000s caused an energy revolution, with a potential to dramatically slash US energy imports should proper infrastructure be established, the concept remains environmentally dicey.

The young technology poses several threats to the environment in terms of water supply, seismic stability and greenhouse gas releases.

The Obama administration has promoted shale gas, in part because of its belief that it releases fewer greenhouse gas emissions than other fossil fuels, but many American scientists have urged caution. The US Environmental Protection Agency (EPA) in 2010 issued a report concluding that shale gas emits larger amounts of methane, a potent greenhouse gas, than does conventional gas – but still far less than coal.

The gold-rush mentality driving the low cost shale gas movement has, however, given many highly established US environmental groups pause.

“Nationally, and at the state and local levels, our public oversight of this industry has not begun to keep pace withthe rapid spread of gas and oil production from shale,” Bob Deans, associate director of the Natural Resources Defense Council (NRDC) told Bellona in an email interview before the debate.

“Correcting that must be an urgent undertaking for our national leadership,” Deans wrote.