With the Rio+20 Earth Summit just two weeks away and US President Barack Obama’s failure to affirm he will attend the historic conference on Sustainable Development, dozens of international environmental groups and think tanks are concerned the results of the gathering will dissolve into a muddle. 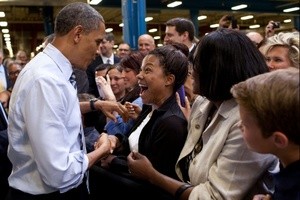 The conference, also known as the United Nations Conference on Sustainable Development, will also be passed up by other major players like UK Prime Minister David Cameron and German Chancellor Angela Merkel.

Both Merkel and Cameron have cited protracted negotiations meant to save the Euro from collapse as their reason for not attending the biggest UN summit ever.

Yet Russia President Vladimir Putin, Prime Ministers Manmohan Singh, of India and Wen Jiabao of China will be joining an estimate 120 world-leaders at the summit.

So what is Obama’s excuse?

“I think Obama is reluctant because Rio would not reflect well on his presidential campaign because it won’t produce any significant outcome,” said Bellona’s senior advisor, International Energy and Climate Issues, Svend Søyland.

“The Rio agenda is completely overbooked. Only 20 percent of the text is agreed upon to date,” said Søyland.

Indeed, Obama has been painted into many unsustainable corners in recent weeks as his campaign against Republican challenger Mitt Romney heats up – most notably his recent turn-about on the environmentally damaging Keystone XL pipeline project over which he has been hectored by Republicans.

Analysts expect further de-greening of Obama ­– who came to power in 2008 with a heavy environmental agenda – as US job rates fall and gas pump prices rise.

All the same, environmental pressure is rising against him. Leaders of nearly two-dozen environmental groups last month called on the President to attend, the Washington Post reported, and they are very much of the mind that Obama’s absence would be damaging.

In a letter to Obama, the heads of US environmental groups including the Natural Resource Defense Council and the National Wildlife Federation noted that U.N. Secretary General Ban Ki-moon described Obama’s presence as “crucial.”

“Your presence at this summit would signal its critical importance to all Americans, demonstrate our country’s deep concern over urgent global issues that will inevitably affect our security and well-being, and highlight our nation’s determination to be a contender in the race to a low-carbon green economy,” the environmentalists wrote.

With so many important figures expected to be absent, UN secretary Ban Ki-moon general is now furiously lobbying leaders to get an action plan agreed.

“The negotiations have been painfully slow,”

Where Rio could fail

Last weekend, overtime talks in New York over acceptable language to set a new path for sustainable development foundered as negotiations fractured into 19 separate dialogues, with major internal disagreements on the processes to be followed, the Guardian reported.

Countries are not being asked by the UN to legally commit themselves to anything – only to sign up to an aspirational “roadmap” contained in a document called “the future we want” and to a commitment to the so-called ‘green economy’ of jobs generated from industries such as renewable energy and energy efficiency,” said the paper.

It is hoped that they will also agree to introduce by 2015 a set of sustainable development goals (SDGs) similar in ambition to the millennium development goals which covered areas like HIV reduction and clean water provision. The SDGs could cover areas such as energy, water and food, the Guardian said.

“We are facing two likely scenarios – an agreement so weak it is meaningless, or complete collapse. Neither of these options would give the world what it needs. Country positions are still too entrenched and too far apart to provide a meaningful draft agreement for approval by an expected 120 heads of state,” WWF director general Jim Leape, told the paper.

“It is very important to prevent a reopening of the conversation on so called ‘Common But Differentiated Responsibility and Capabilites or CBDRC for short,” he said.

“That’s the divide in the Kyoto protocol set forth – countries that only report their emissions the so-called non-annex 1  versus those classified as industrialised that currently have a  legal and quantified commitment to lower their emissions.”

Søyland noted that COP17, or the Conference of Parties of the UNFCCC in Durban, South Africa in December basically abandoned that principle by seeking binding emissions commitments for all nations by 2015 and an actual binding treaty by 2020.

“If middle-income countries succeed in reopening this divide in (the Kyoto protocol) the most positive outcome of Durban will be flushed away,” said Søyland.

What the Rio+20 summit hopes to achieve

Amid these seemingly irreconcilable differences that could emerge between rich and poor nations, derail a plan for sustainable development, and the arguments over which have even included the placing of comma’s, the goals of Rio +20 boil down to two main themes: How to build a green economy that reduces poverty without destroying the environment, and how to improve global governance by revitalizing various parts of the UN system.

The central aim is to agree on a process whereby 2015 will see the beginning of international agreement on a set of global sustainable development goals – with targets for consumption and production, a mechanism for periodic follow up and reports, and specific actions for key areas such as water, food and energy.

Draft texts have included proposals to strengthen protection of the world’s oceans, to upgrade the United Nations Environment Program, to create an ombudsman for future generations, to conduct annual ‘state-of-the-planet’ reports, to promote alternatives to GDP as a measure of well-being, to reduce subsidies for fossil fuels, to support consideration of “ecosystem services” (the public good provided by forests, rivers, mountains and wetlands) in policy planning, to encourage investment in natural capital, and to provide financial support for poorer nations to move onto a more sustainable track.

Some countries – including the host Brazil – are thought likely to announce a set of numerical targets in Rio, but most of the proposals, even if agreed at the conference, will take several years to thrash out. United Nations General Secretary Ban said he expects the most concrete actions to come from NGOs, businesses and city governments.

“Our advice to the Norwegian negotiation team has been to focus on a few attainable goals rather that try to come to grips with the entirety of the summit,” said Bellona’s Søyland.