The Rio+20 summit, a once-a-decade meeting to root out poverty and fix the earth’s worsening environment, wrapped up in Brazil Friday, issuing a roster of non-binding promises that many critics have already branded as pallid or gutless. 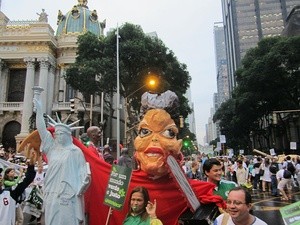 But Bellona President Frederic Hauge, while acknowledging that  “the text of the summit is weak,” said from Rio that overall condemnation comes too quickly.

Also known as the UN Conference on Sustainable Development, a once-a-decade meeting aimed at reconciling economic and environmental aspirations, Rio+20 has produced a nonbinding declaration, committing the world’s politicians to modest goals.

The three-day gathering of 191 UN members crowned a 10-day forum marking 20 years since the 1992 Earth Summit, where leaders vowed the world would live within its means.

Many leading environmental organizations have already condemned the outcome.

Jim Leape, director of WWF, said that the “formal negotiations were by any measure a huge disappointment,” according to the Associated Presss.

“Governments didn’t find a way to come together. There is a lot in the text about ‘acknowledging problems’ and ‘encouraging countries to act,’ but very little commitments. That falls way short of what is needed,” he said.

Still others raised questions of continuing the UN negotiation process itself if this largest summit in UN history could not reach binding conclusions.

Aside from over 100 world leaders, the conference also attracted some 50,000 representatives of NGO’s and other observers who world leader acknowledge must play a central role in shaping the sustainability debate’s progress

“Rio+20 will not change the world, but the presence of civil society is crucial,” said Hauge.  “We need to work hard for the solutions we want to see implemented. It is important to be able to see some of the progress being made as smaller steps in the right direction.”

Hauge emphasized that the Rio+20 program should be viewed in the context promoting goals that should be central to the coming 18th Conference of Parties (COP18) summit in Qatar in December, the annual meeting of the United Nations Framework Convention on Climate Change (UNFCCC).

“Here at Rio+20 there has been more discussion of development issues, and less discussion of climate change and environment,” said Hauge.

“This might be a good strategy as we look forward to COP18 in Qatar later this year, as developing countries might reaffirm and strengthen their belief in the UN process on climate change,” he said.

In a sprawling 53-page statement, the three-day summit voiced dismay that more than a billion people live in extreme poverty on a planet strained by ecological overload, and outline the plan for a cure.

“We… renew our commitment to sustainable development, and to ensure the promotion of an economically, socially and environmentally sustainable future for our planet and for present and future generations,” the document says.

It highlights a range of perils facing a world with a human population set to surge from seven billion today to 9.5 billion by 2050.

The laundry list of detriments to the environment includes desertification, fisheries depletion, pollution and deforestation, and the danger that thousands of species will go the way of the dodo.

But a special status is reserved for global warming, described starkly as “one of the greatest challenges of our time.”

“We are deeply concerned that all countries, particularly developing countries, are vulnerable to the adverse impacts of climate change,” the statement says.

“Sustainable Development Goals” will replace the UN’s Millennium Development Goals from 2015. Defining their aim, however, will be left for future talks ­­– a process likely to be long and fiercely fought.

But despite the demands of developing countries for $30 billion in help, it stipulates no funding figures to achieve sustainability goals.

“We applaud much of the progress we have seen here toward the development of sustainable development goals, and the incorporation of a green economy into the UN’s sphere of thought,” said Hauge.

Some important bricks and confirmations of agreements have been laid. We will work hard everyday to go from words on pieces of paper to real progress and change,” he said, adding that: “Together with our friends and partners we will fight and ensure the period leading up to Rio+40 is not an age of lost opportunities and the previous 20 years have been.”

To promote that goal, Hauge emphasized that the world must go carbon negative.

US Secretary of State Hillary Clinton on Friday told the summit that the document “marks a real advance for sustainable development. We know this is one of the most pressing matters of our time.”

Clinton confirmed the United States would stump up $2 billion in funds, earmarked by Congress in 2011, to support clean energy programs and projects in developing countries. This money could act as a powerful lever for luring private-sector investment, she said.

More than $513 billion has been “mobilized” in commitments for sustainable development by governments, businesses, civil society groups and others, the UN said.

It gave no immediate further details about the pledges, notably as to whether the funding was new, or about the criteria for considering the projects sustainable.

Greens said a revolutionary chance to change a broken economic model had been wasted, while campaigners against poverty railed against greed and selfishness.

UN Secretary General Ban ki-Moon set the Conference on Sustainable Development as the cornerstone of his plan for fairer, cleaner growth, the “No. 1 priority” of his tenure, Agence France Press reported.