Five Members of Norwegian Parliament submitted for parliamentary consideration the issue of reqiring the government to demand cleansing emissions from the Norilsk Nickel smelting plant – located a seven kilometers from Norway’s border on Russia’s Kola Peninsula.

Published on June 21, 2012 by Ruth Lothe, translated by Charles Digges 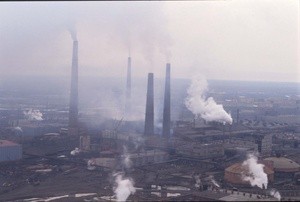 Bellona supports the parliamentary initiative, which was raised earlier this month, and hopes that it will contribute to modenization of the two Russian smelting plants.

For over 20 years, Bellona has been working to end the cross border pollution from the Kola Peninsula through dialogue and documentation, and is pleased by the initiative forwarded by the five parliamentarians.

“Anything that helps keep pressure on the Russian authorities and the Norilsk Nikel group is a good thing,” said Larisa Bronder, an advisor with Bellona speicializing in Northwest Russian pollution issues.

It will now be sent to a parliamentary academic committee before it is submitted for debate and possible adoption.

Ever since Norway’s “Stop the Death Clouds From the Soviets” campaign of the 1980s, emissions from the Kola Peninsuala branch of Norilsk Nickel has been a source of concern.

In 1991 Norway allocated NOK 300 million ($50.7  million) to hasten the process of installing  treatment plants, but little happened. In 2001, the Norwegian government issued a 2010 deadline to the  Russian’s to use the money for its intended purpose. Again, nothing happened, and in 2008, the Russians withdrew from the agreement.

The Norwegian government in 2001 gave the Russians a deadline of 2010 to use the money to install treatment plants in Nikel. Nothing happened and in 2008 the Russians withdrew from the agreement. So the money was confiscated and the money for it revoked.

The report is based partly on figures from the Norwegian Institute for Air Research (NILU), and show that emissions from the smelting plants are slightly lower than before, but 100,000 tonnes of sulfur dioxide nevertheless continue to be emitted annually ­– which is five times higher than Norway’s total yearly emissions.

Emissions of heavy metals from the smelting plants, however, have increased in recent years.

The plant in Zapoljarny is undergoing a renovation to support a new manufacturing technique in which a facility to make sulfer absorbing brickettes will be central. After the modernization is complete – which is slated for 2012 – emissions of sulfer dioxide will be slashed to 1,000 tons per year – or one fortieth of the current emissions. Sulfer dioxide will be captures by the brickettes, preventing its release into the atmosphere. The total emissions from the Kola Peninsula wil then be reduced to an estimated 70,000 tons of sulfer dioxide a year.

But this still doesn’t solve the issue of pollution migrating to  Norway from the Nickel plants, and worsening the alread bad environmental conditions along the Norwegian-Russian border. The briquettes meant to reduce pollution  must be smelted at the Kola plant.  It is thus expected that when brikkette production is in full swing, sulfer dioxide emissions will increase by 30 percent compared to current measurements.

This is particularly bad news for Norway and its Northerly Finnmark county, which lies along the Russian border.

“Significantly improving the environemental situation in the border area is impossible without modernization of the smelter as Nickel,” said Bronder.

Technology for cutting sulfer dioxide emisions is availableand proven, but the plant has still not taken a decision on its implementation. Futher, by plant estimates, it will be at least fie years before a cleansing system will be operational.

The result of the modernization project will be determined by the kind of technology that Norilsk Nickel chosed to implement. This issue should already have been decided by the end of 2011, but when Bellona contacted the plant in April 2012, no decision had been made.

“The Norilsk Nickel group is historically renowned for its postponement strategies in such mattes,” said Bronder.

Prior to the Finnmak municipality and countycouncil elections in 2011, Bellona, ​​in cooperation with the local  environmental groups Natur of Ungdom and Naturvernforbundet, wrote a letter to all county politicians urging them to speak out loud and clear on what they would do to cease the pollution.

As a result, Finnmark politiians took up the issue with the government, and Foreign Ministry State Secretary Ingrid Fiskaa, told NRK television that a Norwegian-Russian working group had been established earlier in the year to reduce sulfur emissions from the Nickel plant.

Bellona asked for observer status in the joint working group, but Norwegian authorities replied in the spring of 2011 that the Bellona participation or observer status was premature, because the mandate of the group was not yet clear.

In 2012 Bellona organized a seminar in the Kola town Zapolyarny in partnership with Norilsk Nickel on the plants’ premises.  It was during this workshop that it became clear that emissions from the Zapolyarny factory would go down significantly, while emissions in Nikel would rise.

“In Russia, the political will, financial incentives and investment in new environmental technologies to reduce pollution is lacking,” said Bronder. “In today’s Russia there is a widespread practice of granting temporary emission permits to industry. It’s actually cheaper for companies to pay fines for pollution than to invest in environmental technology.”

She continued by sayig that: “The Kola Peninsula’s pollution  problems can probably not be solved at the nationally level, but only through binding international agreements.”

“Such agreements are the most important tools we have to limit cross-border pollution. The Gothenburg Protocol ­– which is not ratified by Russia – is a good example of such an agreement .”

The vast and rich Norilsk Nickel company has of course a bears a large part of the responsibility itself by virtue of being the company that pollutes the most in the Arctic. The Group is the world’s leading producer of nickel and palladium, as well as being the world’s largest producer of Platinum. The company is owned by billionaire oligarch Vladimir Potanin, one of Russia’s richest men.

“Norilsk Nickel is a large industrial company that has influence in the areas where they do business,” said Broner. “In taxes alone, Norilsk Nicket paid 10 billion roubles ($3.9 million) to the Murmansk Region in 2011.”

The Norilsk Nickel Group had plans to further increase production at the plants in Zapoyarny and Nikel that are in line with the recovery of nickel ores in Voronezh, south of Mosow. However, the company lost the tender for Voronezh mining, and consequently the ore from there will go elsewhere and production on the Kola will not increase as planned.

Norilsk Nickel signed in August 2010 an agreement with Russia’s Rosprirodnadzor, the government agency for the supervision of natural resources, after then-Prime Minister Vladimir Putin visited the city of Norilsk. Norilsk is listed as one of the world’s 10 most polluted cities thanks to the Norilsk Nikel subsidiary there.

Since 2011 is the Rosprirodnadzor’s Public Council has  conducted two hearings in Norilsk between the company and thepublic and held subsequent meetings in Moscow, where Norilsk Nickel’s environmental efforts have been discussed.

During the May 23, 2012 meeting in Moscow, Bellona’s representative asked a question on the progress of the planned the modernization of the smelter in Nikel. The answer was that Rosprirodnadzor’s mandate applies only to the city of Norilsk, not the plants on the Kola Peninsula.

“We at Bellona believe this could be concrete input for the Norwegian authorities in further discussions with Russian authorities. It must be possible for Rosprirodnadzor to enter into similar agreements for the facilities on the Kola Peninsula,” said Bronder.

“It will give local people the opportunity to attend meetings and get more information about the environmental situation in their own region,” she said.

Information about pollution from Norilsk Nickel is little known in Russia, despite its high profile in Norway. The public’s  knowledge of pollution and health in Russia, studies show, was greater in the 1990s than it is today.

One explanation for this may be that the Norilsk Nickel Group has done its PR homework within Russia to stiffle its reputation as an “environmentally offending” industry.

“[Such PR] has unfortuntaly been very successful even though emissions are virtually unchanged,” said Bronder.