Vis menyen
Bellona.org > Latest News > Climate change > Too much, too fast, too soon? The future of the Arctic in the times of ‘cold rush’

Too much, too fast, too soon? The future of the Arctic in the times of ‘cold rush’

BRUSSELS – Environmentalists, oil and gas industry representatives, the European Commission and certifiers of oil and gas installations were in agreement that the risks of oil and gas operations in the Artic are far greater than in most other places in the world during a European Parliament conference on Wednesday.

Published on February 3, 2012 by Joanna Ciesielska 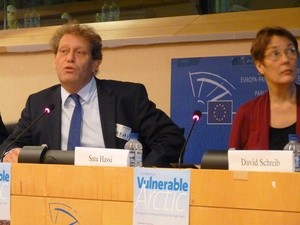 The event, entitled “Vulnerable Arctic” was hosted by Satu Hassi, a Finnish Green Member of the European Parliament (MEP), and was co-organised by Bellona Europa.

“I would like to invite members of the European Parliament to Yamal in the Russian Arctic where the so-called clean gas consumed in Europe comes from, and see with their own eyes what kind of working conditions, environmental conditions and safety conditions there are there,” said Frederic Hauge, President of The Bellona Foundation.

In her opening words Hassi underscored how the impact of an oil spill in the Arctic would be far more dramatic than in most other places.

“Ironically, global warming reduces ice caps, invites even more human interference in this unique natural environment. Shipping, oil and gas extraction then have their turn in further accelerating climate change and melting of the ice caps,” she said.

The Arctic is a home for flourishing marine life, unique habitats and species. It plays a crucial role in ocean circulation and climate regulation, and also acting as a large carbon sink through frozen methane in the tundra and methane hydrates on the Arctic sea bottom.

“Very harsh atmospheric conditions, including factors such as temperature, icing and darkness enhance the probability of an oil spill,” said Nicolas Fournier from Oceana, the world’s largest ocean protection organisation.

All speakers said that the complexity of a potential oil spill in the Arctic would be much higher in such hostile conditions, where it is impossible to clean ice from oil and where there are no suitable blowout prevention technologies at hand.

Nina Lesikhina, Energy Advisor at Bellona-Murmansk, underscored how difficult it is to influence the Russian oil and gas industry, which exports 12 billion tonnes of petroleum to the EU and a similar amount to China annually. Profitability, said Lesikhina, is very often of higher importance than safety, as shown by inefficient oil spill response systems and environmental legislation.

Nils Andreas Masvie, Vice-President of operations in Russia and Kazakhstan for Det Norske Veritas (DNV), a worldwide risk-assessment agency, presented DNV’s Barents 2020 report. The report is still underway as a collaboration of mainly Russian and Norwegian industry and addresses many of those issues with the aim of developing standards for oil and gas rigs operating in the Barents Sea.

“How can you bring the level of safety to an acceptable level?” Masvie said. “There is not much we can do about the temperature, darkness etc., but we can work with the technology and the standards to reduce the risks.”

But what if an accident such as Deepwater Horizon occurred in the Arctic?

Hauge pointed out that there is currently no infrastructure in the Arctic region to provide the massive response of 45,000 people and 4,000 boats that were involved in the clean-up after that accident in the Gulf of Mexico.

Hauge and Hassi stressed that the regulation would apply to a large chunk of the Arctic as it will become part of the European Economic Area (EEA)Agreement and cover the whole Norwegian Exclusive Economic Zone that stretches far north of Spitsbergen. Hauge broadly welcomed the proposal, as safety needs also to be improved in Norway.

“In the incident at Snorre A in 2004, there were only a few cubic metres of drilling mud left to stop the kick. If the oil had come through and blown out, it would not have been one well – as was the case with the Deepwater Horizon – but more than thirty wells that would have been needed to be plugged,” Hauge said.

“The environmental challenges are tremendously complex and too many potential accidents are happening also in Norway – the country recognized as the one with one of the highest drilling standards,” he said.

Hauge suggested the proposed EU regulation should be strengthened with respect to issues such as financial security, human resources and workers’ involvement, criminal liability for oil spills, independent third party verification for all kinds of installations as well as specific rules for the Arctic and other harsh conditions.

He recommended that key requirements of the regulation should apply to European companies when operating in other parts of the world as well.

Bill Hemmings from Transport & Environment , and EU organisation devoted to reducing the environmental impact of transport, emphasised that black carbon emissions resulting from shipping have a severe impact on the Arctic due to black carbon’s dual effect – CO2 greenhouse properties and absorbing sun beams. He reminded the Parliament of its call for the EU to ban heavy fuel oil in the Arctic.

“As 75 percent of oil and gas tankers call in the EU and Norwegian ports, it should use its port state authority to require vessels from the Arctic not to use or carry heavy fuel oil,’ Hemmings said.

Hassi summed up the conference this way: “I think that the risks are huge. The only sustainable solution is to start being serious in stopping our addiction to oil.”