BRUSSELS – Massive investments in new energy generation can reduce the EU’s dependency on fossil fuel imports, and create new industrial growth and employment in Europe while radically reducing CO2 emissions. This is the message of «Energy Roadmap 2050», a key strategic document tabled by the European Commission today. 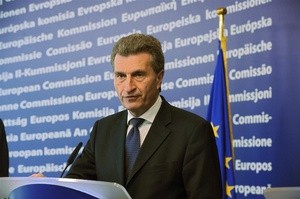 The Energy Roadmap is an energy sector follow-up to the March 2011 Low-Carbon Economy Roadmap which set out how different sectors should contribute in order to reduce overall EU greenhouse gas emissions with 80 percent between 1990 and 2050, in accordance with EU targets. The Commission has been assisted in the drafting by an advisory group chaired by Prof. Dieter Helm and about a dozen energy experts including Bellona President Frederic Hauge.

“I am proud that we have managed to insert key references in the Roadmap to the potential for carbon-negative power generation by combining sustainable biomass with CCS. I am also very happy that the Roadmap clearly states that if fossil fuels are to play any significant role in European power generation after 2030, they will have to do CCS,” says Hauge.

The headline message of the “Energy Roadmap 2050” is that more than a doubling of decarbonisation efforts in the energy sector (in order to reach 85 percent reductions between 1990 and 2050) could be overall beneficial for the EU, thanks to a shift from paying for (imported) fossil fuels to domestic investments.

From imports to investment

Fossil fuels are imported because they are cheaper than clean alternatives. But “Energy Roadmap 2050” makes a longer term and system-wide analysis of the costs of building and operating a sustainable energy system – including power generation, transmission cables, household equipment, transport fuels and so on. From this perspective, the EU’s current import-dependent energy system is not economically attractive compared to a new energy system with far lower fuel costs – and CO2 emissions.

The low carbon economy will require investments in physical capital not seen in Europe since the reconstruction after the Second World War. On average, about €270bn in additional investment is needed annually to reach CO2 emission reductions within the EU by 80 percent by 2050 (compared to 1990 levels). As the biggest investment effort will be needed towards 2030, electricity costs will increase over the next twenty years. But as capital-intensive wind farms, solar power plants and insulated buildings are downpaid, costs will then decrease so that by 2050, electricity prices will return to levels of a «business as usual scenario» – or lower. It will reduce the EU’s energy import dependency by about 40 percent.

All paths lead to decarbonisation

“Energy Roadmap 2050” shows that these results can be achieved through a series of pathways called «decarbonisation scenarios» that have been modeled with PRIMES. These scenarios can be respectively summarized as follows:

1. All low-carbon technologies compete freely, based on energy generation cost assumptions (including CO2 prices) in the model

2. Additional energy efficiency measures, leading to a decrease in energy demand of 41 percent between 2005 and 2050

4. Delayed CCS (leading to a higher share of nuclear)

5. No new nuclear reactors are built beyond those already under construction

Between these scenarios, some common denominators appear. By implication, these deserve political priority.

Energy consumption will shift towards electricity due to electric vehicles and heat pumps in particular. It means that even in the scenario with very high energy efficiency, total electricity consumption increases between 2010 and 2050.

This development is helpful for renewable energy, which in all scenarios accounts for the majority of energy supply in the EU by 2050. The renewable energy share of electricity could reach 97 percent, up from about 20 percent today.

Energy efficiency will in all scenarios play a major role. It is highly reliant on easy access to capital for consumers as well as new business models for companies to provide energy efficiency services. New technologies such as smart grids with real-time information flows between consumers and distributors will also be important.

The roadmap points out that CCS must be applied on all fossil sources from around 2030, and calls for a successful demonstration programme with a clear business case for CCS beyond 2020 for coal and gas to be a cost-efficient way to generate electricity. CCS can help balance the supply of electricity as increasing shares of wind and solar power increase intermittency. As already mentioned, the Roadmap also points out the possibility of combining sustainable biomass and CCS, leading to carbon negative solutions that remove CO2 from the atmosphere.

“Energy Roadmap 2050” puts great emphasis on market integration in Europe: There must be better incentives to build more transmission lines to interconnect national markets where it makes sense, and there will be an increasing need for coordinating various support measures e.g. for renewable energy generation in order to keep costs down.

The Commission’s impact assessment shows that all of this will be a cost-efficient energy system by 2050 – even in the event of cheap fossil fuels as a result of low demand following effective global action against climate change. If such action is not achieved, the demand for fossil fuels will continue to increase, the fuels become ever more expensive and the savings for the EU could thus be substantially higher.

“Energy Roadmap 2050” notes the risk of differential costs of industrial production inside and outside the EU leading to investment leakage. It therefore stresses that a level playing-field must be maintained for carbon-intensive industries between EU and other countries. It points out trade in power with neighbouring countries as a field where the principle of free trade may need to be nuanced with a requirement for foreign power generators to pay for CO2 emissions, as if the plants were located within the EU.

“How to prevent investment leakage is one of the crucial points we need to understand better. One of the conclusions of the Durban summit is that we cannot allow free-riders in climate change policy,” says Hauge.

“Energy Roadmap 2050” demonstrates that fossil fuel imports are no longer a cheap steroid for the EU. In the next few years, the EU will discuss a legislative follow-up to the Roadmap. It may therefore be one of the most significant ways for the EU to trigger the domestic investment and jobs so dearly needed to restore confidence and prosperity in Europe.

“The low-carbon industrial revolution is how European nations may invest their way out of the debt crisis – and on the way show the rest of the world how to fight climate change,” says Hauge.